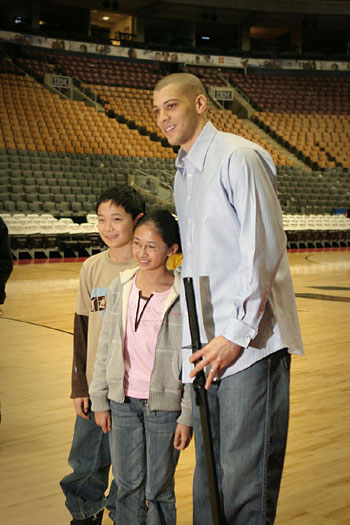 What sucks even worse, are early games on Superbowl Sundays…

And the WORST are -20° (-4° F for you Yanks) Sundays.  But I guess that’s what happens when hell freezes over; I mean Sam Mitchell DID win Coach of the Month right?  What’s next? The return of “The Committed One” Doug Christie?  That’ll never happen…

If you’re a Raptors fan though, you’re pretty happy.  Coming fresh off a sweep of all the Eastern Conference Monthly Awards and also wins over the Hawks and Wizards, Sunday’s game against the Clips was looking pretty promising.

Here were some of my notes from the game (I apologize for the lack of detail as I was tied up helping to coordinate “Chinese Day” at the ACC):

1st Quarter
5:50 –Garbajosa catches the ball at the top of the key and spots Bargnani flashing into the middle; after he whips it to him, Andrea pulls a drop step and CRAMS it two handed on Chris Kaman and Elton Brand…never saw that one coming…never knew he even had it in him…
5:30 – On the subsequent possession, Andrea pulls up on the secondary break at the top of the circle and drills a long two…
3:32 – Jose throws a lob from half-court to a streaking Bargnani who catches the rock on the right side for a two-handed cram…my man is ON FIRE!

2nd quarter:
-EB is tearing the Raps a new one so far…15 points and 6 rebounds…5 on the offensive boards…
-It’s interesting how the Clips are killing the Raps on the glass; 10 to 0 on the offensive boards but are not really gaining any ground.  Then again, I guess if you’re like the Raptors and shooting 74.2% from the field mid-way through the second, it’s not like there’s a lot of boards to get…

Halftime:
-Raptors close off the first half by shooting a stellar 70%.  CB4 is leading the way with 18pts on 7-10 shooting.
-The point guards? Jose and TJ have 8 and 6 respectively.  Is there a better starter / backup pg combo in the league right now?

3rd quarter:
-The Clips manage to get the deficit down to 10 by the end of the 3rd thanks to 13 points from Sam Cassell
-Spent most of this quarter looking for my sweater because for some reason, there was this ridiculous draft blowing at my back…perhaps it was from Chris Kaman’s shooting (at this point, he is 1 for 11)

4th quarter:
-Okay at this point I’m totally not paying attention anymore…my mind is on what we have to do for our post-game event with Anthony Parker. Raps win 122-110.  Highest offensive output for the year.

After the game, we scrambled about 200 of our kids from the Chinese community down to the lower-bowl so that they could meet with former Maccabi Tel Aviv star Anthony Parker.  He answered questions ranging from what his favourite colour was (purple when he was a kid) to who his best friend on the team is (Darrick Martin).  At the end, we presented him with a sword to thank him for coming out to meet us (as pictured).  As two of my kids presented him with this gift that I picked up in Chinatown, my mind flashbacked to a headline I read a few years ago:

I remember reading that sentence and thinking: “how in the hell does a basketball player end up having a sword in a car with them?”

I guess I figured that out now…