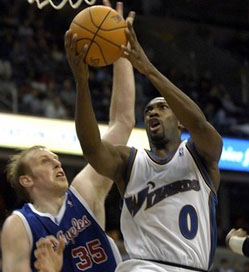 “It’s a party and none of you are invited!” That might as well have been the tagline for Friday night as the game was more of a pre-party exercise for Agent Zero’s exclusive birthday bash that evening than a regular game. That’s all everyone was talking about. I missed the early locker room action but I heard it was a lot of questions about that and Gilbert’s ‘phenomenal swag.’ As I was coming in I saw a lot more people than usual looking for extra tickets which probably means the game is sold out. It’s just a Clippers game but the D.C. faithful are starting to show up in droves. Funny how winning brings out the supporters. I got in just in time to grab a bite to eat and catch tip-off. I’m watching from the visitor’s press row tonight which is located over the shoulder of the Clippers’ bench. It’s a pretty nice view as you get a look at all the adjustments on the visiting side. The section is a bit nicer than where I’ve sat at previous games with newer equipment and flat screens. A bunch of ESPN radio people are bogarding the front row seats. It doesn’t seem to matter where your name is the press just sits anywhere.

Tip off and Shaun Livingston just did an ill move. I always read the Sports Guy’s work on the Clippers so I’m playing close attention to Livingston who everyone says has great court vision but has yet to make that next step towards superstar. Maybe tonight’s his night. This must be the kind of game Elton Brand loves. He is going up against a fairly small Wizards team and should have his way all night in the post.

1st Half Highlights:
-Maggette just drove to the basket and didn’t get the call in the act of shooting so they have to take it out of bounds. Dunleavy is livid. He’s literally screaming at the ref and we’re about 2 minutes into the game. I see a technical in his future.

-The arena just did a big happy birthday to Gilbert. The guy next to me asks if I’m doing a piece on him. I say no and mention something about Gil’s penchant for launching at will and he gets all fired up. He swears G.A. doesn’t take a bad shot and starts preaching about how “He can do that because it’s all about practice! He can jack those shots up cuz he’s hit them 13,000 times!” Ok dude, relax.

-Tim Thomas comes in on fire hitting back to back 3s. He’s smoking and it’s not even a contract year.

-1 on 5 Gilbert Arenas specialty. The crowd starts the MVP chant. Woah! Let’s not get crazy. I can see it but at the same time it’s way too premature.

-18 for Brand and 29 for Arenas. They are the story of the first half which ends with the Wiz up 66-57. Another interesting stat is the 14 board difference for the Clippers.

-At Halftime they have birthday cake for Arenas. We entice one of the PR guys to show us his invitation and he comes back with what looks like a bracelet case in a leather sack. He takes the case out the sack and opens it up. At the top is the date, time and location and on the bottom is the black Arenas card. The invitation alone had to cost a grip.

-They finally gave Dunleavy a tech. I saw that one coming. He was pissed at the refs for not calling a foul when Livingston went down. He stepped on the court and they T’d him up.

-For whatever reason the Clips have gone away from what was working, namely pounding it into Brand and Kaman, and are settling for jumpers and missing badly.

-Santana Moss and Clinton Portis in the house. No doubt they’ll be at the after game festivities.

-Tech on Arenas as he screams. “That’s bullsh*t!” on the carry call. The Wizards are still up 12 and having an easy time in the second half.

-Antonio Daniels is being real aggressive tonight taking it to the basket several times. The last one was a +1. I think he’s just hyped about the party.

-People are starting to leave as the Wiz extend the lead to 16.

-Birthday Boy is done with 2:34 to play ending the night with 35 points and 12 assists.

-17 seconds later Clippers concede defeat and clear the benches as the Wizards go on to their third straight win 116-105.

Post Game:
We hit the Clippers locker room first. You’d think these guys would eat healthier but somebody put in an order to Ruby Tuesdays and everyone is still in their towels devouring barbecue doused chicken and ribs.

Tim Thomas rips one of the reporter’s handwriting saying it’s the worst he’s seen. He says, “You and my lawyer have the worst handwriting.” Hmm, maybe that’s the answer to those balloon contracts he’s been getting….Execs: “Wait, that was a seven?!”

I talk with my man Cal and he says people started arriving to the party before the game was even over. Now everyone’s trying to dip. We see Deshawn Stevenson strutting out of the locker room iced out with some big shades and a chain. He looks at one of the PR guys who’s walking away and says “You better turn around when you see a playa like this!” Then he turns to us so we can take in the full outfit and says, “You see my swag?”

Indeed, it must be ‘the swag’ cuz he’s hitting up Club Love and me.. I’m going home.