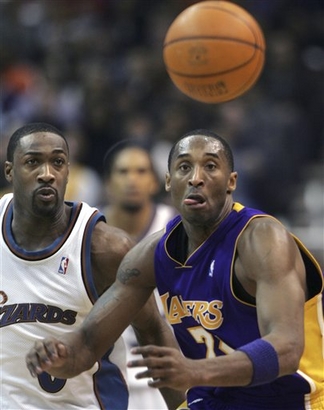 Ahh yea, Kobe v. Arenas II. Last time the two of them combined for 100+ points in a Wizards win in which Gilbert felt Kobe ‘shadowboxed’ his 60 in post game interviews. So nothing less than fireworks were expected tonight in another meeting of MVP candidates. I arrived at the arena extra early tonight because I knew I’d have to miss the post game and I wanted to catch the pre-game warm-ups. I chilled in the press room and got some food before the locker rooms opened up. I heard a few camera guys talking about how they were going to gorge themselves tonight because they were going on a three game road trip. More and more I’m starting to realize that Verizon Center may be the crème de la crème of press eateries. The fact that they even serve hot dogs at the other spots supports that. Tonight, the menu consists of a choice of salmon or sautéed beef tips, veggies, mash potatoes, cake and more. Another quality night.

Anyways, I jet over to the court thinking I would get my first glimpse of Kobe. No dice. There are a couple Wizards big men shooting around but not much else. Then I head to the visitor’s locker room where Phil Jackson is holding court. He’s surrounded by a small swarm lead by David Aldridge who I basically see everyday now. So Aldridge asks Phil if he expects to get some consistency back once Luke Walton returns and he responds with this gem, “Oh yea, it’s a long season, plus I read my astrology report and it said that Mercury was moving out of my sign so that means communication should be better. It’s been there for six weeks so it’s been tough.” The whole crowd was just stunned by the fact that he was serious. Me, I’m laughing my ass off.

I roll up in the locker room and everybody is present except KB24. They have the healthiest snacks I’ve seen of a team so far with Cliff bars, Balance bars and fruit set in the middle of the locker room. I see Kwame Brown in the building dressed like he may actually play. I also see Aaron Mckie who I completely forgot was even on the Lakers. Walton has some contraption on his foot which I guess is therapeutic in some way. I completely forget to mention to him about his celebrity status on drunkathlete.com. Oh well. There are a few plays on the board but not much action so I head to the Wizards locker room which is equally quiet and mostly empty sans a shirtless Arenas walking around with some headphones on. I make one last trip to the Lakers to find out that Kobe has dropped the freeze on the press and won’t be out to speak to anyone. One media guy’s comments on Kobe, “If you can’t stop being a dick for five minutes you’ll be a dick all your life.” Ahh the DC love for Kobe. This carries into the resounding boos he gets once he finally does take the floor.

-Arenas throws up an air ball on his first shot.

-Tonight, they are starting Jarvis Hayes for the injured Jamison. Hayes is trying not to screw up his first start hits an open 3.

-Kobe hits a fade away over Stevenson. And let me tell you that’s gonna be there all night long.

-At this point Kobe isn’t even guarding Stevenson choosing to cheat and help out on Arenas.

-Fast break off a Kobe turnover leads to a Haywood dunk. Wizards are up 12-6 and are coming out the gate pretty quick.

-Kobe gets a steal and throws down a nice dunk.

-Somehow Kobe gets switched on Arenas. Arenas, who looks like his eyes are practically lighting up, crosses up Kobe and takes it to the hoop for a serious bucket. That’s the play of the game so far!

-Bynum hits a lay-up off a nice triangle offense play. Lakers are starting to run their offense and have closed the gap to 6.

-Lakers are using their size advantage and running a lot of post plays.

-Darius Songalia making an appearance for the Wizards. He’s been hurt for a while and finally stepping on the floor. He gives them some size and a little shooting. He stills looks a bit stiff though.

-Etan Thomas locks up Kobe for a jump ball. Kobe gets the tip back though and drains a J from the free throw line.

-Deshawn J. He’s keeping the ‘you can’t see me’ gesture to a quick second because he’s trying to put a body on Kobe.

-Odom hits a three and looks like he is set for a big night tonight.

-Kobe again switches on Arenas who drains a 3 in his mouth to end the first quarter 29 all.

-This is why I respect Kobe’s game, the second quarter starts and he’s basically like let’s cut out all the nonsense screens and chooses to guard Arenas himself.

-Arenas drops another 3 in his grill.

-For whatever reason they have put Antonio Daniels on Kobe. I guess they are trying to give him a bunch of different looks but this has disaster written all over it. Kobe has a few inches on Daniels and looks basically automatic as he hits a three.

-Caron goes in for a thunderous dunk but is fouled. He hits both to bring the Wiz within 1. 40-39 Lakers.

-Kobe blows a dunk but hangs back as he smacks himself. His teammates get a steal and kick it back to him for a highlight reel worthy 360 banger.

-Second half has Kobe and Gilbert with 20 but the Lakers are holding a 4 point edge. Kobe is shooting efficiently, 9-16 with two 3s, while Gilbert is 6-17 but has been to the line for 7 free throws. Kobe is letting the game come to him playing within the offense while the Wizards offense is starting to just be Gilbert running around and taking it in 1 on 5. Oh wait that’s how they always play…my bad.

-Kobe goes to the line for the first time tonight.

-They called a play for Haywood who decides to shot a fadeaway. I know you wear #33 and you’re 7-feet but you’re not Patrick Ewing. Stop it.

-Arenas hits a shot over Odom.

-Kobe gets a monster jam off of a steal which has everyone in the crowd out of their seats.

-Butler hits a step back J over Radmanovic who’s got his Vlade beard going strong.

-Smush Parker hits a three after standing there for about a minute thinking about whether he should take it. Yea, no one is even trying to guard him.

-As the third quarter ends Kobe has 32 and Arenas has 31 but the Lakers are starting to pull away as they are now up ten. Not an insurmountable lead but the Wizards have yet to get a stop all night. If you read my previous game reports or watch the Wizards often it’s a familiar story.

-Odom and Blatche exchange threes and then Kobe rises extra high for a jumper over Arenas.

-Stevenson gets a dunk off of Arenas’ strip of Kobe. Then Kobe comes back and puts a J over Arenas.

-Arenas comes back down and fries Kobe with another shake getting the four point play but they are still down 12.

-Arenas goes up but gets completely stuffed by Bynum.

-Odom hits a deep 3 at the end of the shot clock to all but end this one.