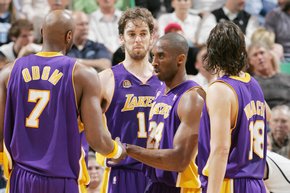 I didn’t get nervous. Not once. Not when the Jazz cut the lead to single digits midway through the fourth quarter; not even when they sliced it to three with under a minute remaining.

Like any fan who invests way too much emotionally into their team, I have my rituals. They’re personal, and a tad too embarrassing to discuss in such a public forum, so I’ll spare you the details. Just know this: I didn’t need them prior to Game Six.

Maybe it’s that I was resigned to the fact that we would have a Game Seven in this series; why not, it certainly seems to be theme these days.

The Lakers had no intention of playing a decisive game. None. They came out scorching, took it to the Jazz from the beginning, and never let up. Utah, God bless them, scratched and clawed its way back in the fourth quarter, but it was too late. The damage had been done. Their season was effectively terminated in the first half of the game.

The difference, in the game and in the series, quite simply, was Kobe Bryant. The League MVP played beautifully, and kept knocking in daggers whenever Utah looked like it might really make things interesting – the most memorable being a long three, followed by an absolutely unfathomable fadeaway triple-pump jumper (plus the foul), with just over four minutes remaining in the game. The shot was impossible in every way, and it was the kind of thing that no team can recover from.

The truth of the matter is that this win was a complete team effort. Game Five had provided all kinds of hints that the Lakers were ready to make the leap (so to speak) as a team, and completely outclass a worthy opponent – sorry, but Denver doesn’t qualify – and it all came together in Utah.

The ball moved effortlessly, guys played with unflinching confidence, and the defense (for the first time in the series) was world-class. As a result, Utah shot terribly (save for a few miraculous threes during the final desperate seconds), they relied on the refs to bail them out (didn’t happen), Boozer fouled out, the crowd was a non-factor for much of the night, and the Jazz never had a chance.

And so now, L.A. moves on to the Conference Finals for the first time since 2004, and they seem perfectly capable of going even further still.

As for the decisive game of the Spurs/Hornets series, do me a favor, gentlemen: I don’t really care who wins at this point, just go into quintuple overtime or something.