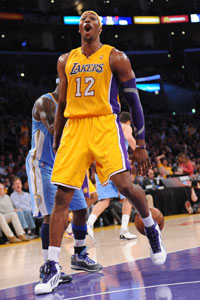 Before the game, Dan D’Antoni comes into the locker room to write keys to the game on the whiteboard. Dwight Howard starts to yell over.

D’Antoni laughs it off. He jokes he’s going to beat Dwight up, then motions to leave.

So there it was on the whiteboard in all caps.

D’Antoni turns around and picks up the marker again.

That’s what the whiteboard read until about three hours later. By that point, Dwight had 28 and 20, his best game as a Laker. Lakers 122, Nuggets 103.

It’s just that easy. Write it down somewhere, like that awful movie The Number 23 with Jim Carrey, and Dwight Howard will get it done. Guaranteed. No questions asked.

There’s probably something prescient (or at least something revealing) about this series of events. But let’s skip it. Give Einstein a Rubik’s Cube and it’ll sit unfinished on his desk until he feels like playing with it.

The Lakers won. Dwight needs to be motivated. This team will be every bit as good as you imagined it, and last night was proof.

Kobe was playing point guard tonight. When you say that sentence, emphasize the playing part, sort of like you’d say, “Kobe’s playing cops and robbers,” or “Kobe’s playing Hamlet in this amateur theatre production of ‘Hamlet.'” It’s all a performance, but Kobe’s fake PG’ing is still better than 85 percent of real PG’ing in the best basketball league in the world. He had eight assists and he ripped another piece of candy off the Steve Nash Advent Calendar.

(“We won’t know who we are until we get our point guards back,” Mike D’Antoni said after the game, forgetting/omitting that he played two people who are definitely point guards tonight.)

The bench was revelatory, but it’s an aberration. We all know it. Here are quotes anyway.

“I’ve really appreciated all the confidence Coach D’Antoni has shown in me,” said Antawn Jamison, who played his best game in two years. He had 33 and 12 with five threes. He was outstanding.

Jodie Meeks said almost the exact same words. He hit seven threes and only one of them hit the rim. It was a display. Both of them are right. They owe Mike D’Antoni roughly 30 steaks.

They’ll both be around when Pau Gasol gets traded for a bunch of depth.

Somebody asked D’Antoni if he prefers that Gasol run right to the elbow on offense, like he was doing all game.

“I’m not big on pounding the ball inside. He’s got other skills,” coach says.

He’s not lying. It said, “Bigs go straight to PR positions” in the locker room before the game.

– Metta World Peace on Gregg Popovich’s fine. “He just should’ve said they had something. Flu-like symptoms.”

– More from Metta on Pop: “I love that guy. He’s got a little bit of Ron Artest in him.”

– Mock applause right away for Dwight Howard’s free throw. Or it may be Orange County Everybody Wins Soccer League Attitude night.

– Kosta Koufos is trying to guard Dwight Howard. Much in the same way I’m trying to become Elisha Cuthbert’s husband. Both ideas are cute to think about. 11-11 after a Dwight three-point play.

– Kobe has three assists and no shot attempts through six minutes. They’re winning.

– Huge Denver lineup out there to start the game, by the way. Lawson-Iggy-Gallo-Faried-McGee.

– Dwight swatted a Faried shot then started singing “Move bitch, get out the way” with the PA. This is the America I want to live in.

– Another absolute facial. This time from Iguodala. 30-22, Los Angeles. The salon is open.

– Dwight has 16 and 4 after that dunk. All you have to do to motivate this guy is turn his face into a sandwich on two vicious dunks. Is that really so hard, Mike D’Antoni?

– McGee is all over the place. Another noisy dunk, this time over his own guy. It’s like NBA Jam: Tournament Edition out here with all these dunks. Quick, someone enable hot spots.

– 34-27, LA. Not much bench involved, thank God, and it shows. Just Jamison and Duhon. Kobe has five assists.

– Pau remains nonexistent in this offense, by the way.

– Yes, that’s 49 Lakers points 15 minutes into this game. Extrapolate that.

– Bill Kennedy straight up trying to pick a fight with Andre Miller for no real reason. Yay NBA officiating.

– Super weird sequence. Pau’s fouled. No call. Fastbreak Iggy dunk. He hotdogs it and misses. Collects the rebound. Goes up for one more dunk. Misses. Gets a ticky-tack call. I’m surprised I’m not covered in someone else’s popcorn right now, to be honest. 61-52, LA.

– Kobe got bored and is now deciding to take over. A couple of buckets and back-to-back steals. 69-57, LA.

– Back-to-back Nuggets threes to start the third. Reignite the barnburner.

– Kobe crossing up Gallinari twice then hitting an elbow jumper. That’s what happens when you start three monument-sized people.

– The Lakers are going to have 100 by the end of this quarter. Back-to-back threes, then a fastbreak two. 90-73. Three minutes left in the third.

– The Lakers are 12 of 24 from 3 after Chris Duhon hit one because, really, why the hell not at that point?

– Kobe’s eighth assist. Then a Jamison buzzer beating layup on a broken play. 97-82 at the end of three.

– The bench has been crazy good, but this is kind of a suicide test to start the 4th: Duhon, Meeks, Artest, Jamison, Gasol.

– Another Jodie Meeks three. That’s 7 for him. That’s three players with 20+ not named Kobe Bryant.

– Back-to-back Antawn Jamison threes. The second contested and in transition. What decade is this? Is it okay if I listen to some Salt ‘N’ Pepa while we’re here? 113-95.

– Crunchtime lineup is in and Pau isn’t.

– Oh! Excruciating. That’s the word I’ve been looking for, apparently.

– So it turns out Evan Fournier is white. There’s that information.

– Dwight Howard: “If I get a chance to shoot (a three) again in the corner, I’m gonna shoot it.” The Lakers traded Andrew Bynum for Andrew Bynum.