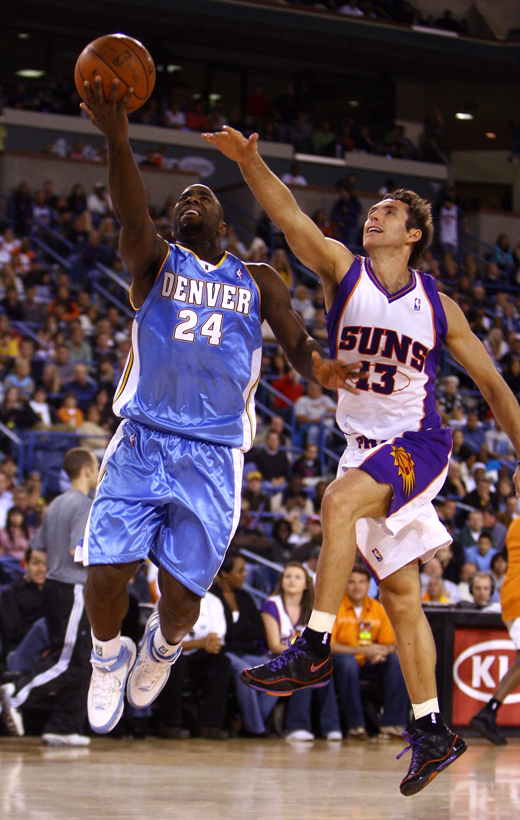 Our corespondent and his crew traveled to see the Nuggets and Suns duke it out under the stars last night. Of course, they got far more than they bargained for…

Indian Wells has the highest proportion of millionaires of any city in the United States. The descent of the Phoenix Suns and Denver Nuggets this weekend on their dusty golf’n’spa emporium did nothing to lower the ratio. (We kid you not about the dust; our hotel room bore a photocopied note to apologize for the “intrusion of dust” into every nook and cranny, especially “around the pool area”. Take that, Denver snowstorms!)

We suspect, however, the method of acquisition of those extra wealth digits varies widely between the NBA players and the locals. Therefore, we were pleasantly surprised to hear from our contacts deep in the cab driving community that the Nuggets and Suns were able to find common ground (and local talent) at Robbie T’s Friday night in preparation for Saturday’s nationally-televised celebration of NBA basketball through deft gimmick. If we’re all filthy rich, we really can all get along.

Come game time, though, we found relatively few gawkers from the local community taking advantage of the opportunity to see high-end basketball pass through their little burg; just the ones that need to be seen at events made their way outside the home gates.

The most striking example consisted of a well-carved yet truly ancient woman poured into a garish green tube dress and dreadlocked to the ground; her last ill-conceived accessory turned out to be her date, a disheveled Fatty Arbuckle with a vacant child’s sugar high stare. Most others stuck to their polo shirts and sweaters tied off over their shoulders, much as Central Casting requested.

No, the vast majority of attendees turned out to be diehards with travel budgets. Suns fans took top billing in numbers and appreciation; only Suns gear could be purchased on-site, even. Still, a fair number of Nuggets fans sprinkled themselves through the crowd, latching onto each other for camaraderie when they found each other at the beer tent.

Yes, the beer tent! The NBA threw themselves a little party outside the Indian Wells Tennis Garden four hours before the contest, complete with margaritas, gorillas and a DJ. After all, they already invited 16,000 of their closest friends.

Once the artifice was off, though, and the ball tipped under the stars, every bit of the game felt like preseason basketball in Phoenix if the thermostat got stuck at 62-degrees. (For Phoenix residents, this is pretty much status quo from March to October.)

The wind fell one notch under “cheap excuse for lousy shooting” for much of the evening, until the garbage fourth quarter. The free T-shirts intruded from every nook and cranny during each break in the action; we half-expected to see a thin layer of $2 T-shirts around the pool when we returned to the hotel.

The basketball was execrable, of course, between the preseason nature of the contest, the

unique atmosphere, and the benching of Allen Iverson, Carmelo Anthony, and Amare Stoudemire. Frankly, we barely recognized Mateen Cleaves from our lofty perch without his towel. Can we petition the League to force him to always carry one? We could call him Linus Cleaves.

For a brief stretch in the second, though, Shaq was off the court reviewing the script for “Nanook II: The Nanookening” and Steve Nash could let loose. Terry Porter must have cringed as Nash threw himself against the Nuggets on break after break in what we once knew as Suns basketball with zero assistance from his mates. Two assists, six turnovers, and one exasperated Canuck later, the Suns were back to drudgery.

Otherwise, though, it was forgettable basketball on an otherwise memorable evening. Not even the potential for the Birdman to recognize his cage had no ceiling and shoot for the stars could save the on-court product.

Fans were in fine regular season form, though, including the young woman that took a swing at a muscle-laden rabblerouser and the diehard fan in front of us screaming instructions to her Suns that were more likely to be heard by the sun itself than the players from our seats. The cowbell ladies made it out, too, which ends up being 74 percent less annoying when the clanging can disappear into the sky harmlessly.

(By the way, did anyone on television see the charming fellow with the McCain-Palin sign behind the basket? He put a TNT sign on the opposite side to lure in the camera. Sneaky, sis!)

The Lakers fans airdropped from L.A. as well, bringing their own unique style of fandom. One foursome fell out of the sky next to us in the second quarter, stole a row of seats to our right because their seats were too hard to get to (i.e., climbing stairs), tried to figure out which club they could get into this evening while deciding which team to cheer for, and then left 15 minutes later when the real seatholders showed up.

Or the fans that started a “Kobe! Kobe!” chant while cackling fraternally and elbowing each other about their brilliant anarchist bent. Then they drank.

When the party ended and the proper ratio of millionaires to plebeians reset, we couldn’t help but feel it had gone about as successfully as it could have. The wine flowed, there were a few hookups (mostly involving that coquettish Steve Nash), a lot of groping (of Shaq; thanks, George Karl!), and a good time had by most. Now if only we could figure out which pile of sand our car is under…

Dennis Tarwood (“Tuffy”) is a freelance writer; he writes for Deadspin, SPORTSbyBROOKS and other fine rags. He can be found at Refrigerator Logic on his off hours.