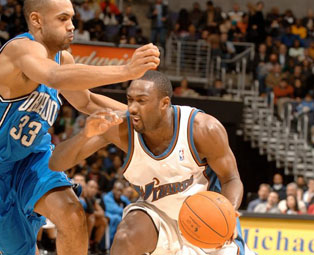 It’s Friday night and you know what that means, another Wizards game at the Phone Booth. The Wizards are on a four game winning streak and tonight first place in the Southeast division is on the line as they face the Magic. I’m starting to get used to this now. My goal for tonight is to get courtside. I properly starved myself to get the most out of the free meal, which tonight was brought to you by B. Smiths in D.C. Solid soul food consisting of some collard greens, Cajun chicken and rice. I saw Brian Hill enjoying some down home cooking as the Wizards resident Chaplain came by and sat next to me and struck up a convo. Does every team have a resident Chaplain? I just thought that was interesting. Do some teams have a resident Rabbi or Ayatollah. I’m just saying. Anyways, after taking down some grub I did the regular walk around. There was really no action in either locker room. I saw Grant Hill doing some lunges with some kind of stretching band. Hey, anything to avoid injury #4,080 right. I came back to the press area and noticed Jake Appleman was listed in the building. I figured we’d run into each other at some point and exchange pleasantries.

I hit the court during the shoot around and immediately see the difference between the two teams. I’d say more than half of the Magic were on the floor practicing looking like they were really enjoying themselves. Dwight Howard and Bo Outlaw were working on some low post moves with Mark Bryant while J.J. Reddick and a few others were running some wind sprints. Ok, seriously why is Reddick even warming up? He and I both know he’s getting no burn tonight. I guess he wanted to break a sweat. The opposite side of the court is bare except for Caron Butler and the Wizards trainer. Caron is always out here before the rest of the team working on pull up Js and quick jab step jumpers all over the court. You can’t say my man isn’t dedicated. He even took time between drills to take a few flicks with the kids the Chaplain brought out. Good guy all around.

I noticed some folded chairs courtside that a couple media guys sat in last game so I honed in on them and took a seat. I figure I’ll just sit here until someone tells me to move and see what happens. Just as game time approaches I see the stat sheet guy come by and the security lady is looking at me so I’m like ‘uh oh’ I’m about to get moved. However, it ends up being all good as the stat sheet guy, now identified as Cal, sits down next to me and we start talking. It ends up we went to the same school and even graduated the same year. He gives me the breakdown on the seating saying where I was sitting was generally where the team PR cats sat but if the seats were taken they just sat in any empty seats. Good to know for the future.

Aiight, its game time and I see DeShawn Stevenson has cut the dreads and etched what appears to be a converse star in the side of his head. Good choice yo. Martin Lawrence is in the building and they bring out a guy to do the national anthem on a harmonica. Now that was different.

Worst tip-off ever. They redo it and the Magic get control. Dwight makes a quick move and hits a short hook. Buckets.

Arenas returns with a J.

Howard looks like he got the point and a foul but he stepped out of bounds.

Butler fades away and that’s good. Looks like the drills are working.

Turkoglu for 3. Good. This is not a typo. Hedo is roasting Caron right now cuz he keeps sliding on D.

Caron just crossed up Turkoglu and drew a foul. He hits both as Darko Milcic comes in for the Magic.

Jameer Nelson with a short jumper.

Dwight Howard two handed jam. The Wizards came out really flat and are lucky to only be seven down after Hedo was raining 3s on them.

Offensive foul on Dwight. The refs aren’t gonna let the man child get away with the shoulder bumps.

Darko +1 on Jamison but he missed the free throw.

Grant Hill with a nice turnaround J for his first shot of the game. It’s always nice to see Grant. He’s like ‘Apollo kids,’ no matter what happens you just clap cuz he made it out on there.

DeShawn for 2 to bring the Wizards within 5. He’s doing his ‘I’m blowing on my hand because I’m on fire’ move. Can you even be on fire when you hit one shot?

Neither of these teams play any real D so they are just running up and down the court practically uncontested. Sitting courtside is pretty cool but it sucks when they show replays because you gotta damn near break your neck looking up to see what happened. I’ll probably go back up to the press area at halftime.

Cal wonders how much money Grant has made if you divide it by actual game time during his seven-year contract. I’m guessing at least $200,000 per game. Being the stat guy shouldn’t you know those kinds of things though? That should be in his bio in the media guide.

Gilbert with one of those classic ‘I’m gonna bump into you but somehow I get the foul’ jumpers for the three-point play.

Turkoglu for 3. Good. Can someone guard him? He’s 4-5 from three and it’s only the first quarter.

Turkoglu back down the court with a lay-up finally scoring inside the arc giving the Magic a 9-point lead.

Caron with a couple free throws to end the quarter 31-26.

Keyon Dooling off the bench with a great shot.

Calvin Booth with a nice pass from Antonio Daniels for the flush.

The Magic have the luxury of bringing in an entire second unit while the Wizards have to leave either Arenas, Jamison, or Caron on the floor to get any points.

How much beer is this guy in front of me ordering?

Great pass from Butler to Arenas cutting the lead to 6.

Darko stripped. This dude is a bum.

Dooling with another tough shot.

Howard dunks and Eddie Jordan is yelling at the refs to call Dwight for walks.

They just brought out this Spanish singer to help give out burritos to the crowd. Something about that just seems wrong.

Hill fouls Arenas. He got about a half inch off the ground to try and block that shot. All the metal in his ankle must be holding him down. It’s good to see Grant on the floor though….

A pushing foul on Grant and he is complaining like crazy going, “What did I do? I didn’t touch him?’ Don’t they give techs for that now?

Jameer Nelson for 3 to bring the lead back to 8.

Offensive foul on Hedo even though it looks like Jarvis Hayes just tripped. Grant Hill is still complaining about his foul. He even asks Arenas if it was a foul. Refs are way more lenient with the questioning of fouls tonight than what I saw earlier in the season.

Ariza with a steal and a dunk to put the lead back to 7.

Andray Blatche making an appearance. Between him and Antawn (pronounced Antoine) Jamison I’m wondering if it was intentional or if their parents just can’t spell. Stop doing that to your kids!

Turkoglu for 3. Good. This is just copy and paste people. Hedo has like 20 already yet they are only up by 5.

Blatche sets off the fast break. He has no intentions of passing it. He thinks he’s Gilbert Arenas. 2 on 1 and he gets the + 1 cutting the lead to 2.

Nelson hits a last second lay-up to end the half with the Magic up 4.

Funny story how I ended up meeting Appleman. At halftime I rolled back to the press room and got on the junk food line. I just happened to have the latest issue of Slam on me which has a picture of Appleman in the opening pages. As I sat down I see a guy across from me who looks similar but has glasses on. I tell my boy Teon I think it’s the same guy but he swears it’s not. I never listen to him though. He’s still too shook to leave the press section. I get up and walk towards the guy to steal a glance at his pass but it gets turned around. Instead he walks up to me and practically puts his face into my media pass and goes ‘Yo Johnny I was looking for you!’ Needless to say it’s Appleman. I was going for subtlety. Now I’m wondering how many people’s chest he stared down to find me. We chat for most of the third quarter as the game passes on. Turns out he’s real close with one of my good friends. Small world.

Anyways, back to the action. It’s the 4th quarter and the Wizards can’t buy a rebound and they let Calvin Booth back in the game yet they are somehow up 85-82. It has a lot to do with the foul line as they’ve hit 22 for 24 on the night so far compared to 11 for 16 for the Magic.

Magic call a full timeout so they bring out the mascot and I think this is the first time I’ve seen a mascot booed for missing one of those bungee dunks: priceless.

Booth with a foul line jumper. You can totally tell no one wanted him to shoot it until it went in. Like no, no, no Yes! Wizards by 5.

I haven’t said it in my previous reports but Hibachi!! Arenas is on fire hitting from all over the floor. He’s got 33 now.

Arenas is pulling all kinds of moves out of his arsenal. There’s pretty much no reason for the other 4 guys to even be looking for a pass right now. It’s not happening. He probably has 2 devils on his shoulders telling him to shoot constantly. He’s got 35 but it’s only a 4 point game.

Dooling to the rack.

Nelson just took Jamison off the dribble and the Magic take back the lead 108-107 with 2 minutes left.

5th foul on Dwight Howard and its tied at 108 after Jamison misses a free throw.

Holy Caron with a jumper over Turkoglu. 2 point lead with 45 seconds to go. That was a big shot.

Wizards get the board but for whatever reason Stevenson passes it to Jamison who is 8-13 from the line tonight. The worst of anyone on the floor right now since the rest of the team is 23 of 24. DeShawn…good choice yo.

Luckily, Jamison hits both and the Wizards take a 4 point lead with only 12.7 seconds to go.

They foul Caron but he misses both!! Can you go from clutch to bottoming out any faster than that?

Final play of the game and Dooling misses the leaner. Final score 112-111 Wizards.

Locker rooms afterwards are pretty mundane. We see Dooling limping out to the bus. Someone asks him why he is limping and he says, “That will happen chasing Gilbert Arenas around.” Grant Hill is also limping out. He didn’t play the whole 4th and we all know that could be a bad sign. I go up and cop a flick while Teon tells him how they met at the 2003 Source Awards. The funniest thing is how enthusiastic Grant sounds about it like ‘Oh Yea!? Really!’ as if he remembers or even cares. It’s good to see him walking around though…