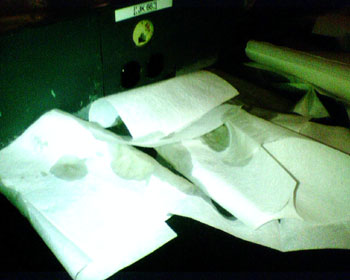 –The Knicks are starting to sell out games. This is a good sign.

–We’re 1:44 into the game and the Suns haven’t scored. Suprising, to say the least.

–After two nice feeds to STAT, Nash throws an alley-oop attempt off the front rim.

–You’d think the Knicks’ best shot tonight is that Phoenix is a) tired from playing an uptempo team last night b) looking past them and c) off. All of those things appear to be plausible early, yet it’s the Knicks who start sluggish… And Jared Jeffries gets stripped by Raja Bell on a post up. Nash comes down the other way and drains a jumper. 8-4.

–The Phoenix pick and roll is currently on point. By that, I mean they get whatever the hell they want from it. Maybe they should call it pick-and-poison or pick-your-poison. Eh.

–Austin Burton of Dime Magazine helps me get on the internet while watching the game. An assist from Dime. Nice. Burton points out that I could finish the Dime off with a SLAM. I think that was 11 basketball magazine puns in one note, but I lost count.

–Marion from Nash. Dunk you very much. Suns up 16-12. And, by the way, have I mentioned how much easier it is to type and watch? It’s so much better than looking down, jotting some shit down, missing some action as a result—Jamal Crawford just hit a three, by the way—and later transcribing it.

–Eddy Curry is currently 5-5 for ten points. He’s keeping the Knicks in it. The Suns just sent a triple team at him.

–Isiah puts David Lee and Renaldo Balkman in at the same time after not starting Lee again. This is kind of redundant and lacks any sort of tactical thought.

–Thanks to 16 from Curry, the Knicks end the first up by one, and the jazzed Garden crowd gives them an ovation.

–Nate Robinson overzealously challenges some Suns on foray to the rim and gets swatted. Finally!

–An And-1 for Curry. Even though he often goes stretches of games averaging donuts for rebounds, his offensive game right now is straight krispy kreme: UNSTOPPABLE. 20 points in 14 minutes. I think he’s on pace for 70.

–Jamal Crawford just drove the lane in traffic, threw the ball off the glass to himself. The end result: Lee got the rebound and slammed it home.

–Crawford to a streaking Balkman for a ferocious dunk. Knicks up 10. BREAK UP THE KNICKS.

–Mike D and ADROCK from the Beastie Boys are here. Shouldn’t they be in Jersey, not sleeping until Brooklyn?

–The Suns are playing no defense whatsoever, getting beat after throwing double teams at Curry. And Nash just briefly doubled David Lee. He must have been on his way to the other side of the floor on a rotation.

–A length of the court pass to a cherry-picking Lee just highlights Phoneix’s lack of defensive intensity.

–Perhaps in an effort to shun versatility against the NBA’s hottest team, Zeke rolls with his 6”5-6”11 lineup: Crawford, Q, Balkman, Lee and Frye.

–The Suns go on a 6-0 run, punctuated by a nice top of the key jumper from Boris Diaw.

–I’m currently repressing the urge to refer to Steve Nash as “Promiscuous Boy.”

–The Suns end the half up three. So much for the best 14 minutes of basketball that the Knicks have ever played. Ever. I figure the second “ever” is good for emphasis.

–Raja Bell picks up a tech for beefing with Curry. It should be noted that Bell is struggling so far, so I’m not sure whether or not he’s trying to get in Curry’s head, or if he’s just pissed off.

–Nash works a sweet give and go with Amare. What’s so great about it is that it’s on the break and Nash just stops as if he’s about to initiate something before firing a bullet chest pass right back to a streaking Amare.

–I asked Lang to email me jokes from the North Press box. His first addition: The Suns just flew in, and boy are their arms tired.

–The Suns go zone, so David Lee flashes to open space at the foul line, catches the ball, turns around, takes a dribble and dunks on everyone. 63-61, Suns.

–Lang: You ever notice how the Knicks logo kind of looks like an orange? Hey, do any words rhyme with orange?

–The Suns are suddenly up 12. In a related story, Eddy Curry hasn’t touched the ball in a while.

–Leandro Barbosa’s jumper is ugly looking. Although it looks pretty next to Shawn Marion’s. So I guess what I’m trying to say is that Leandro Barbosa’s jumper is the unattractive girl that hangs out with the really wretched-looking chick. And Steve Nash’s jumper is Jessica Biel. I ask Lang for his take on the female prettiness equivalent scale of Steve Nash’s jumper, and he Sidekicks back: We (Lang, Ben, Khalid) can’t respond. Our press table is being flooded by a wayward Coke. (Pictured on left)
–With Suns up 14, Eddy Curry makes another layup and comes up hobbling.

—James Jones wets an open jumper, to give him 8 points. And that’s just kind of how the Suns are. They score so fast, it’s even hard to track how well some of their guys are playing because they all contribute so quickly. By the way, the Eastern Conference exchange rate for James Jones’ 8 points is 3.6.

–Malik Rose checks in for the second time tonight. Mardy Collins checks in too.

–8:46 left in the fourth quarter, Suns are up 17. It appears to be pretty much over, but the Jamal Crawford offense goes on a 7-0 run.

–The Suns are maintaining a decent lead, but the Jamal Crawford offense is currently unconscious, not to mention really fun to watch.

–The odd thing about seeing Stephon Marbury on the bench in a suit is that he can’t put a towel on his head.

–A Nate Robinson three that would have brought the Knicks to within 5, misses. Nate compounds things by flying into Raja Bell while going for a loose ball. Bell makes 1-2. He also might be bleeding.

–The Jamal Crawford offense gets called for a charge, and that will probably end any chance of a comeback.

–Nash fires a pass to Amare and neither Lee nor Rose, each camped out defending a low block, moves in an inch. That was the most uncontested dunk I have ever seen, bar none.

TAKE ME HOME. TAKE HOME. TO A PLACE I WAS BORN…NEW YORK CITY…