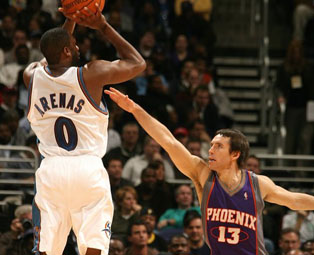 My first thoughts: Can this game get into the 200s?! Tonight’s the night defense takes a back seat, then again that’s probably every night with the Wiz. Either way I won’t even bother mentioning the defensive deficiencies on each side because if this game is anything like their first I’ll be a happy man. The Suns are coming in red hot (no pun intended) with a 13 game winning streak started right after Washington ended their first one in a 144-139 thriller. Since I’ve started covering the Wizards they have gone from a sub .500 team to #1 in the East. Coincidence….? Probably. I heard the Suns are a sight to behold and a must see live. That’s why I’m here in D.C. tonight and hopefully I can get a good seat.

Before getting some grub I catch a glimpse of Nash at the shoot around. When I say he drained 30 threes in a row, not only am I not exaggerating, I probably owe him a couple. His shot is textbook and effortless looking like it should go in every single time.

When I hit the press room the place is packed. The seating list is like a who’s who of the sports journalism game. Steven A. Smith, The PTI guys (Wilbon and Kornheiser), David Aldridge, and reps from ESPN the Magazine are all in the building letting you know how big this game is.

I’m starting to think Jay-Z has a contract with the Wizards because I swear that’s all they play in the workout room, at the tip off, during the anthem.. I’m just saying. It’s funny how at NBA games it’s all rap all the time after they basically tried to reject every aspect of hip hop culture. Commodification at its finest. Now if only they could play some good hip hop I’d be happy.

Time for tip off and this should be a thriller. The crowd is packed and really loud. There are even quite a few Suns fans in the house.

-Arenas sets the game off with a J (Who knew this would be the last he’s heard from in the half).

-The two MVP candidates, Nash and Arenas, are guarding each other straight up to start the game as Nash hits his first two jumpers.

-The Suns offense is all pick ‘n roll and it looks fluid. They just keep resetting the high screen and roll until there’s an opening. If there’s nothing in the middle they kick it out to the corner that the defense cheated from. For such a high potent offense they are very patient taking only really good, clean open shots.

-Stoudemire sits with two early fouls as the Suns rotate Diaw to center.

-I was as skeptical of Nash’s two MVP trophies as anyone openly wondering how a person who plays so little D could be the most valuable. But this dude just makes plays. He just executed a no-look handoff to give the Suns a 13-6 edge.

-Diaw being, dare I say…, “Jordanesque” with the reverse lay-up.

-I’m kinda surprised that Arenas hasn’t attacked Nash. He has been passing most of the game and not trying to set up his shot. It’s a 10 point lead halfway through the first and I have a feeling this is gonna pick up in a hurry.

-Jamison just turned it over and then airballed on the next play.

-3 back to back turnovers for both teams end with a Marion flush. 22-10 Suns.

-The Suns work the ball around the court for an open James Jones 3.

-Caron gets a bucket on one end but Nash came right back down and gave Haywood the business for a 3 point play making it 31-14.

-Timeout as they congratulate one of the dancers for being “voted” to the all-star dance team. Wait…what? Where was this ballot? I’m over here voting for Arenas and Kobe and I could have been voting for Crystal! Can someone please promote this better next time?

-A three from Barbosa ends the quarter with the Suns cruising 41-20.

-Hey the Wizards have breakers now. They’re breaking to “Hip Hop is Dead,” which is kinda fitting because the Rocksteady Crew they are not. They totally need more Puerto Ricans on the squad.

-Arenas sits to start the 2nd as Eddie Jordan starts with his second team. This worked last time against the Bulls but it’s not getting it done tonight. It’s 55-29 before Arenas makes an appearance.

-The wide open corner threes have killed the Wizards all night. The Suns are showing how drive and kick is done. The spacing of the players is the key to the Suns. Any double team leads to open shots.

-Arenas finally making some noise as he grabbed a rebound and found Jarvis Hayes underneath.

-3 fouls on Amare as he tries to say it was Jones. Now he’s got a tech and will be taking another seat.

-It’s 60-32 and with anyone else this would be over but we’re barely through half of the second. It’s just beginning.

-Arenas hits his first 3 over Nash.

-Nash alleys to Marion. I gotta give it to Nash. He is a true coach on the floor. He positions players and orchestrates things with and without the ball.

-Arenas hits a three followed by another jumper to slightly close the gap to 66-43. He’s finally getting aggressive.

-D’Antoni tech after a foul on Arenas.

-Another Nash 3 as the Suns end the half on pace to score 152…..in regulation!

Looking at the stat sheet, I point out to one of the guys next to me that Nash is 7-7 from the floor and 3-3 from three point land. He then points to the assists column which shows 8, 7, and 6 assists for Nash, Barbosa and Diaw, respectively. Wow

Chatted it up with David Aldridge, who was behind me on the ice cream line, and the cat from ESPN Magazine. As we talked about the Suns utter dominance ‘D.A.’ dropped this little gem regarding his thoughts on Nash. “I don’t care how many times he won MVP, that motherf*&$er is in the discussion!!” I have to agree Mr. Aldridge.

He also said Nash bringing his ‘A’ game was a compliment to the Wizards. That is of course assuming someone putting a foot up your ass could ever be considered a compliment.

It’s more of the same as the Wizards have contested maybe 2 shots all night.  But they make a push in the third behind a few steals from Caron Butler. The closest they get is 15 before the Suns break the century mark by the third quarter and push the lead back to 19.

-Early 4th and the Wizards go small except Haywood whose patrolling the middle.

-Raja Bell 3 from the side. One day it will click for the Wiz that they need to guard the corners.

-Right now the Suns have shot 29 threes hitting 13 of them.

-Marion dunks off of Haywood’s block of Nash. Obviously nothing is derailing this freight train.

-Wizards cut it to 14 as the crowd gets excited but that feeling is fleeting as the Suns push the lead back up behind Amare’s free throws, a classic Nash scoop shot and a sick fade away at the buzzer.

-You know the game’s over when your fans are leaving with 4 minutes to go. Garbage time officially begins a minute later as the Wizards throw in the towel. This game was never close from the tip-off and the score, 127-105, is not even an accurate portrayal of how bad they lost tonight. If the Suns would have hit more of their open threes, a lot which were in and outs, the Wiz would have lost by 40.

No one is even trying to go to the Wizards locker room. After that shellacking they probably just want to get out of there. We head over to see the Suns who are all relaxed and agreeable after extending the streak to 14. Everybody’s asking if this is a revenge game or a statement game and as usual they all say no and it’s mostly believable. It wasn’t so much a revenge game or even a statement to the Wiz. It was a statement to the East that the Suns are in town.

Jalen Rose in the house grinning from ear to ear. And why not? 18 mill to be a human seat warmer. You gotta love it.

Nash gives the team an overall grade of C+ since they gave up a piece of the huge lead. And on paper he’s right. You take out the 1st quarter and this is actually a close game…on paper.

Wilbon asks Nash if he taped the State of the Union and he responds, “No, but I may have if Barack Obama was giving it” noting that he felt Obama had a good chance to win it all.

D’Antoni’s, “We’re a lot better than people think,” quote not withstanding, the Suns come off as a pretty humble bunch. Barbosa (10 points, 11 assists, 6 boards) says that’s been a big part of his success off the bench. He notes, “The team has been giving me a lot of confidence and the coach has been giving me a lot of opportunities so I’m just trying to do my best every time I step on the court.”  If they keep playing with that mindset they may be holding up the trophy come June.