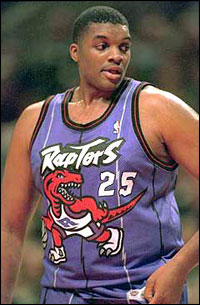 For the record, both Jake and I attended this wonderful matinee at the Garden. Alas, his notes were eaten by a vindictive Gmail e-mail, and I didn’t take that many notes to begin with. Once the Knicks went on their implausible third-quarter run, we were more interested in watching Tennessee-Virginia in the pressbox. But hey, I still got a little something for ya.

• I actually had no intentions of going to this game before Saturday afternoon. Mainly because I’d lost track of the schedule, and had no idea the Knicks were even home. But the noon start meant breakfast at the Garden—always a greasy B+ at least—and it would get me to get off the couch where I’d spent the last three days watching NCAA action. So thank you, Kathleen, for finding me a seat.

• I turn the corner towards the Raptors locker room and am met by an ENORMOUS media crowd surrounding Raptor coach Sam Mitchell. Is this the NBA Finals? Times beatwriter Howard Beck assures me that it’s just that the Raptors have a huge media contingent. OK.

• There are no players in the Knick locker room. None. Of course, it’s 10:30 a.m. the day after St. Patrick’s Day. Not that anyone was out late or anything.

• Jake engages Raptor rookie Jorge Garbajosa in a long conversation en Espanol. Jake, who studied abroad, has a trip to Spain planned and is merely asking Jorge about different places to go. SURE he is.

• There is a downside to early starts, and that is seeing guys like Jerome James and Rasho Nesterovic before noon. Yeesh.

• The Knicks jump out to a 7-2 lead on a three from Franchise and twos from Jared Jeffries and Channing Frye. A month ago it was thought Francis was done for the year, and Frye was so far out of the rotation he had actually stopped spinning. And now they’re starting. Who’s coaching this team, Larry Brown?

• Frye has six points and two rebounds and most of the fans aren’t even awake yet.

• Rasho hits a baseline jumper and gets pulled for Bargnani.

• Juan Dixon checks in. One has to wonder if he spoke to Francis (a fellow Terp) pregame about being separated from his life partner (in his case, Steve Blake).

• Malik Rose gets T’ed up without even getting off the bench. That’s talent.

• Nate Robinson checks in, and the game immediately spirals out of control. I’m sure its just a coincidence.

• Meanwhile, Darrick Martin is out there for the Raptors. It’s worth noting that Darrick is older than I am.

• The Knicks are in tht fast-break zone that they threatened before the season started. And it’s working. Robinson and Marbury are leading runouts, with Renaldo Balkman cleaning up all messes. Eddy Curry is probably feeling left out.

• Steve Francis gets caught in some kind of switch underneath the basket and gets boomed on by an angry Chris Bosh. Ouch.

• Eddy Curry picks up a fourth foul to go with his four points and single rebound. Nice to see ya, Eddy.

• The Raptors—big and small guys alike—love the three. Which is all fine and dandy, except misses lead to long rebounds and fast breaks. Which leads to a 20-6 Knicks run and a game put out of reach early. Did I mention the Raptors are the class of the Atlantic Division? Relegation, anyone?

• 1:56 to go in the third, 71-51 Knicks. This is when Morris Peterson gets his first action of the day. Wow. Remember when he was a key piece in Toronto?

• 75-55 after three. And now for 12 minutes of garbage time. Not to be confused with Garbajosa time.

• Bargnani finds his range. Nice of you to show up, Andrea.

• Francis wets a three at the 24-second buzzer. It’s that kind of day.

• At 4:43, Mardy Collins, Malik Rose and Kelvin Cato checks in. Jerome James follows at 4:07. He needed those extra 34 seconds of rest. Actually, it’s so Balkman can check out separately and receive a much-deserved standing O.
• Joey Graham puts down a mean dunk on James (or Cato—I’m not really paying attention at this point) that means absolutely nothing.

• Mo Pete shoots an airball that lands right in Kelvin Cato’s hands. And then, dribbling over halfcourt with under 10 seconds left, he’s stripped by Nate Robinson. Stay classy, Nate.

• Jake tried to tell me that Malik Rose was walking around the locker room afterwards saying “boom” to people. Something like that. It was a bad connection.

• My main man Uros Slocar has a Spongebob Squarepants bag.