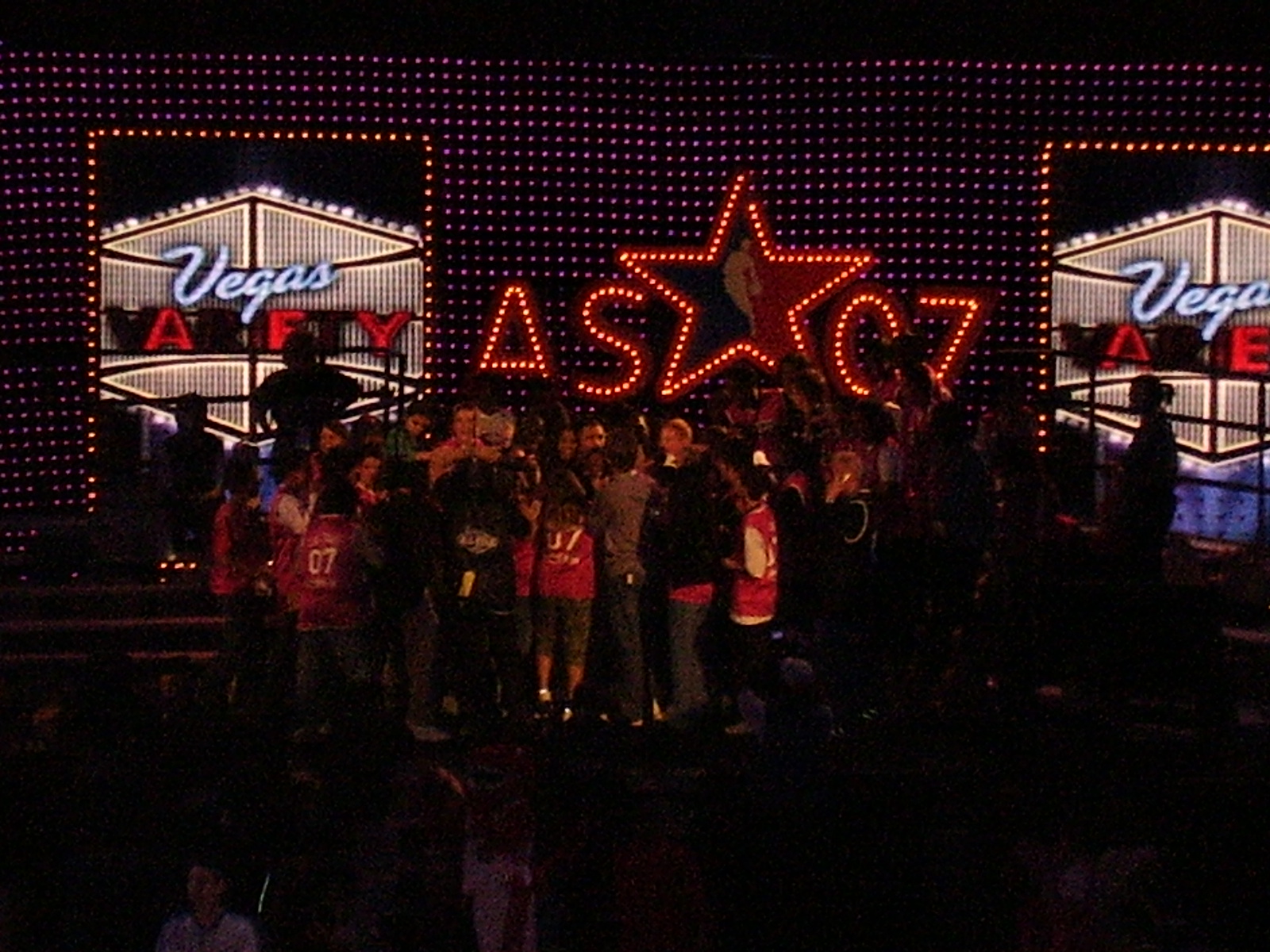 This was supposed to be posted before we went out last night, but my room internet connection is killing me. We will have party updates and everything else you need coming. If someone named Lang mentions me nodding off at the blackjack table at the embarrassingly early time of 2:30 A.M., don’t believe him. Though last night was a lot of fun, we’ve still got much more to do. I owe it to all of you, and more importantly myself, to pull a ridiculous and unhealthy all-nighter. To the game.

Lang and I chose to attend the rookie-sophomore game. It’s my first All-Star trip and even though we are in Vegas and I could find a million things to do with my time, I figured it would be better to go. These games are always fun to watch. No defense, lots of alley oops. Traffic was immobilized as usual on this trip, so it took a while to get there. Me and Lang walked back and forth through the hotel until we found the secret bus to get to the Thomas and Mack Center. Very little to report from pre-game. The meal was nothing special, considering we are in Vegas. VEGAS!!!! Sorry, I keep doing that. We got out to our assigned slam.com seats. It turns out slam.com is some kind of futuristic adventure clothing company. How did they get seats next to SLAM Magazine? Weird.

The game started. I Was about to eat my dessert brownies and David Lee had 6 points already. Less than 2 minutes into the game and it was already a dunkfest. The crowd is 95% little kids with high voices. Not a sellout.

Starting PG Deron williams is gunning for the MVP of this thing. He’s not in the real All-Star game so he’s got to do something. He is not here to play PG.

Randy Foye to Rudy Gay for the oop. Insert Tim Hardaway/Rudy Gay joke here. How about Tim Hardaway getting banned from participating in events in Vegas? That’s what happened to Joe Pesci’s character in Casino.

The court has pink sidelines. I’m having trouble keeping up with the scoring it’s coming so fast.  Way too many little kids performing and screaming. Dancing. Headaches. Am I fast forwarding to tomorrow morning for these headaches?

There is a huge stage with pink lightbulbs and more kids standing on it. Truly a Vegas event. Bynum and Chris Paul come off the bench. Bynum makes a strong move in the paint and a hook over Bargnani.

Chris Paul and David Lee run the pick and roll PERFECTLY. Lob to Lee for his 13th and 14th point of the game.

Adam Morrison backs in on Raymond Felton, shoots the turnaround fadeaway over him. Teammates.

Chris Paul pushes the ball hard and gets it to Felton for the vicious oop. The game is predictably out of control already.

Three on zero for the Sophs after a Marcus Williams turnover. David Lee could have given it to Bynum for the dunk. He doesn’t and David Lee throws it down as hard as David Lee can. 18 points in 14 minutes so far.

They give up all pretenses of this not being TRL and have a contest where the winning names are Kelly Clarkson and Chris Brown. The shrieking is horrible. Then they introduce Ciara. Even louder shrieking.

Monta Ellis catches a lob pass and gets to the hoop with the longest hop step in history for a layup. The refs are calling absolutely nothing and I love them for it. He scores on the next possession too. Then Chris Paul steals the ball and leaves one up for Monta for a dunk.

This game is a lot of fun. Lots of offense. Chris Paul leaves a lob up there for Monta and he hammers it down way above the rim. Then he does it on the next play with a 180.

Not to speak in Bill Walton hyperbole or anything but Chris Paul to Monta Ellis might be the best backcourt in the history of basketball. Seconds after I wrote that, they combined on their third straight oop. I am not kidding. I guess it could be an indictment on the rookies and the lack of defense in this game, but Chris Paul and Monta Ellis just completed 4 alley oops in a row. What more do you want?

By the way, I know the score doesn’t matter but the rookies are really getting their asses kicked. Next year Oden, Durant, Noah, and the rest of that class are going to do this same kind of thing to the sophmores. Who is rookie of the year? Foye? Roy? Anyone?

Chris Paul out, Deron Williams back in. David Lee back in. Monta has to find a new way to get the ball every play now. He’s got 14 while Lee has 18. Instead the play is Bogut trying to cross up Millsap and going to he basket. It’s as bad as it sounds. By the way I might be the only media member covering this game.

Randy Foye and Brandon Roy are trying to make the game as competitive as it can be. Then Deron Williams drains a three on a pass from Monta. The little kids do the wave. Lang has left to go do some networking. Deron hits a pull up three. I’m pretty sure Chris Paul never even took a shot while he miust have like 15 assists in the half. Deron goes 1 on 5 to end the half. It’s 77-48 though. I hope millions of people are gambling on this.

Cedric Ceballos is hosting a halftime thing with Kevin Garnett. That was bad, but after this bizarre ballroom dancing thing was over, Cedric started talking about chicken noodle soup. Oh my God this is the end of days. As human beings we have failed mother earth and wasted our limited time on her planet. Later on, Lang told me that Danny Granger was doing the chicken noodle soup dance too. I must have blacked out.

Deron Williams, still going for that trophy. David Lee gets an easy dunk. He is 11 for 11. Not one of his shots has travelled greater than 4 inches.

Bargnani flashing the speed getting to the hole. Bogut cherry picks the other way.

I don’t think the kids in the crowd are watching the game. They just cheer cause their parents gave them too much candy or something. David Leeeeee with another dunk. 13 of 13 for 26 points.

Sophs go up 97-65 on lob from Lee to Head. Hate to get redundant here but David Lee on the break with another dunk. Chris Paul and Monta Ellis need to get together on a freezeout to keep the MVP trophy out of his hands.

Chris Paul changed shoes at halftime (Source: Lang) and hits his first shot of the game, a three. No more Mr. unselfish. Chris wants a trophy too.

There is no Chris-Monta show, just lots of sharing the ball. Boooooo. This is the most neutral crowd in history, and by neutral I mean they do not have any interest in the game. The players on the bench are trying not to look bored. After a Monta layup I catch Deron Williams looking at the stats on the scoreboard. Jealous?

Jordan Farmar is gunning away, just casue what else is he gonna do. Monta finally misses on a crazy reverse layup.

Rudy Gay backs and spins his way in to the post forcefully. He’s the only rookie that could play for the sophs.

RUDY GAY!!! If the score does not matter (and it does not) then that might of been SLAMAdalastfiveminutes. I kid. But it was a monster. CONSPIRACY THEORY: With the NBA taking hits for the Tim Hardaway homophobia, did David Stern order the sophmores to allow Gay to fill up the highlight reel with the game out of hand? I don’t have the evidence I need. Yet.

7:45 left. The MVP is going to be either David Lee or Chris Paul.

Oh boy, another Chris to Monta oop, and then another. They’ll probably be hanging out later tonight. And never leaving each other’s side for the rest of their lives. What chemistry!!! (NEXT MORNING UPDATE: They were both at the same party, which we attended as well.)

David Lee gets up to try and get back in the game. His coach seems to be telling him to sit down. Mike Ivaroni? Is that like D’Antoni’s failed lab experiment to duplicate himself?

Paul Millsap throws down a huge dunk to cut the score to 140-99.

Chris Paul comes back the other way, now he’s scoring to lock up the trophy. Bogut decides to attack Bargnani in the post again. This is personal between them.

Randy Foye is setting the record for most meaningless drives to the hoop with nobody in his way for dunks that nobody pays attention to. Lee comes back into the game.

Hey guess what? Chris Paul leaves it for Monta who goes up for another dunk. He’s got to be getting tired of all this jumping. This is the NBA dream. High scoring, lots of dunks, barely any free throws or fouls. It’s the exact opposite of the playoffs.

Rudy Gay throws down a windmill just because.

The game ends, a blowout. The trophy goes to David Lee for cracking the 30 point barrier. YES!

Postgame: We went down to the media area where all the players were. It was funny how hours ago the real All-Stars each had their own table and a swarm of reporters and tape recorders in their face. After the rookie-sophmore game, the baby ballers each have their own stool to sit on and a few people talking to them. If this game were sponsored by Burger King, we’d all be eating Whopper Juniors.

Lang works the room, seemingly having a long term friendship with every person that works for every NBA team, as well as every reporter. I kind of follow him around and then decide to just wander the room on my own and listen in. Pretty dull conversations. I thought about asking Adam Morrison if he had some of those magic Gonzaga mushrooms and planned to run out to the desert later, but instead I went the professional route of keeping my mouth shut. Got out of there. Back in my room. The day is over. It is party time. If you don’t hear from me ever again, please avenge my death.