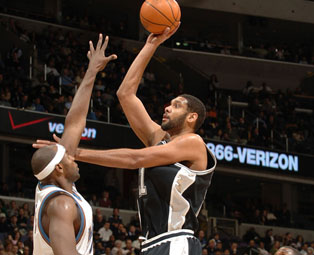 It’s Wednesday evening and I’m in D.C for another Wizards game this time to see them tangle with the San Antonio Spurs. I got there early enough to finally do the interview with Crystal from the All-Star Dance team (interview coming) and cruise around the arena before tip off. As I headed towards the Spurs locker room (since the Wizards locker room is generally empty) I saw Popovich outside talking to a few reporters about James White. First off, I’m pretty sure Popovich has never even cracked a smile in his life. This dude just looks perpetually pissed off. The funny thing is he looked even more pissed after the game, a game they won extremely easily by the way. What will it take to make this guy happy? Anyways, back to the point.

So Popovich is outside and one of the reporters asks him about James White who I didn’t even know was on the team. I believe he asked if he was playing tonight and Popovich deadpans and I’m paraphrasing, “We made one of the toughest decisions of our season tonight. We thought it over some drinks, a case of brewskis, etc. and we have decided that James White will be put on the inactive list and that we will activate Eric Williams instead.” Then he asks well when will you unleash him? Popovich, continuing to take a dump on the kid White for no reason, goes, “Well our plan is to wait a few games before the playoffs and then we’ll let….what’s his name again? Yea, we’ll let James White play because then no one will have seen him so they won’t know how to guard him.” Then someone says hey he is a D-League All-Star you know and Pop goes “Exactly. These things I’m saying are backed up by facts. I’m not making this up.” All without ever even smirking.

-Duncan drops a nice bounce pass to Elson for an easy bucket.

-Arenas knocks down another as he is starting the night off pretty well.

-Wizards attempt to try and create some semblance of a post game going to Haywood a few times. The first time was a turnover and the second time his dunk was blocked by Elson. So much for that plan.

-Elson just blew an easy lay-up but the real story is how insanely wide open he was in the first place.

-Caron is struggling out the gate throwing up an air ball on a one handed loft.

-Parker on the other hand is smoking, hitting another jumper.

-Arenas takes Duncan to the hoop and hits a nice reverse.

-Duncan misses another jumper but Ginobli puts it back. Even when it’s a simple tip-in Ginobli makes it look like he could lose his life during the play.

-Wow.. just looked up at the scoreboard and realized its 22-9 Spurs.

-Arenas just hit another jumper and he has 8 of the Wizards 11.

-Horry swats Etan. Spurs are so fluid they’re making this look too easy.

-Parker just shook and blew by Arenas for the lay-up. He’s 5 for 5 with 2 boards and 2 assists… make that 3 after the nice bounce pass to Oberto.

-Wizards are shooting 21 percent right now and it’s brutal to watch. Arenas is the only one with a field goal.

-Antonio Daniels finally hits a floater to stop the drought but its still 29-15.

-First quarter ends with the Wizards down 33-16. Spurs are shooting an excellent 73 percent while Arenas has more points than all his teammates combined.

-Jacque Vaughn getting some burn. Is it garbage time already?

-Finley drains a three. The Spurs play similar to the Suns in that they consistently look for the best shot available.

-Manu with another daring move and lay-up.

-Parker returns. The scary thing about this domination is Duncan only has 4.

-Butler is way off as he misses again. He’s 2 for 8 after coming off his career high against Seattle.

2nd Half is more of the same. Duncan gets a tech for some reason but who cares. It’s 68-45 Spurs.

-As the rout continues, a fan behind me yells for me to put this in my notes “Jarvis Hayes is a bum and the only bigger bum than him is Haywood. There is a reason why they didn’t pick up his option.” Then he says as long as Jacque Vaughn is in the game they have a chance. Funny stuff.

-The Wizards get within about 12 but then get pushed back out to 20+. Back to back threes from Ginobli mean this game is over.

-The mass exodus begins in record time as the sold out arena begins to empty with more than 9 minutes left to play in the 4th with the Wizards down 96-74.

-Final score is the worst loss of the season with a 110-83 drubbing.

People try to say that they are hurt by Jamison’s loss and that this shows it, but the truth of the matter is they got destroyed by a team that can execute. Jamison hanging out on the wing gives them another threat and may stretch the floor a bit when he is on but it still makes them a one dimensional, jump shooting, three point happy squad. Caron gave a lot of props to the Spurs defense and I asked was there anything he saw tonight that they felt they could import into their defensive schemes and he responded with ‘They have Tim Duncan! They have a great system and a great player anchoring it. We are pleased with our effort but we have to get better defensively on the fly and be ready by the playoffs.” That was similar to his comments in Slam. My question is when is it gonna happen?