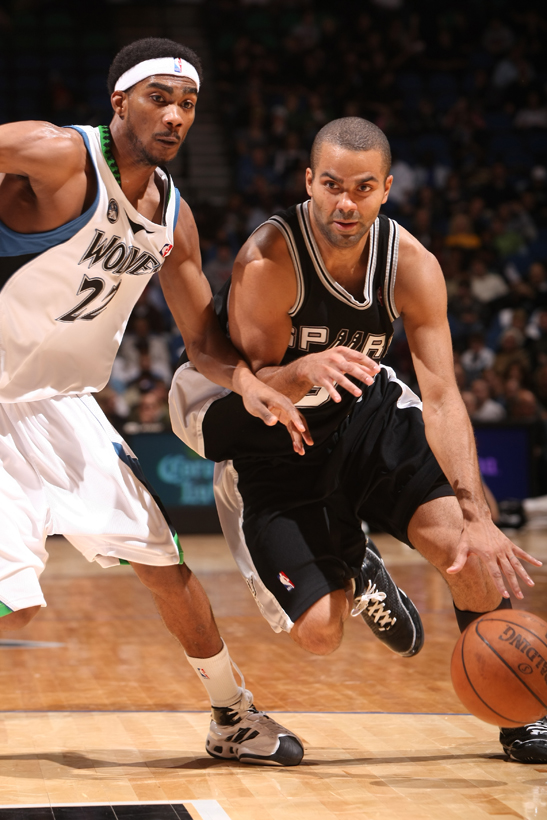 The murky, overcast skies above the Twin Cities on Wednesday certainly didn’t reflect the dawn of a new day, but the winds of change that swept an entire nation Tuesday night were clearly still reverberating throughout the Target Center. As the Timberwolves prepared for a visit from Gregg Poppovich’s Biennial NBA Champion San Antonio Spurs, much of the locker room chatter centered around Electoral College Champion Barack Obama and his historic victory. I had a chance to catch up with a few of the players and get their thoughts on the matter. Here are some highlights…

SLAM: What was the biggest issue that factored into your decision making?

Al Jefferson: Just to keep from going through another four years of what we’ve been seeing for the past eight years. Even though for tax purposes, voting for McCain probably would’ve benefited me more, I haven’t always been in this situation. I grew up struggling and so did my family so I can relate to what people are going through. I just think that Obama-regardless of whether he was yellow-it wouldn’t have mattered. It was what he was saying and the changes he wanted to make were what we needed. And if McCain was saying the same things I would’ve voted for him.

Mark Madsen: Having studied economics, I was a little worried about the tax plan in the long term. Short term, I think it’s gonna be really nice. But I was a little bit nervous about the long term sustainability of the tax plan. I’m actually thrilled though, with the outcome because I thought that both candidates were so qualified. And I think that internationally, our stature is going to regain what it was in the late nineties and 2000. I spent two years in Spain and the biggest thing for me is how we’re perceived internationally. Unfortunately, in the last six to eight years, it’s gone downhill.

SLAM: How much did you consider the tax breaks that you would have received under a McCain administration?

Mark Madsen: I’ll be paying higher taxes and that’s fine. Cause for the longest time, I was telling my friends that ‘I want to pay higher taxes’. The big issue for me is that we’re in a recession and to raise taxes in a recession, that’s what got me nervous. I talked about that with some of the guys on the team and their counter arguments, there’s some strong counter arguments.

Sebastian Telfair: A lot of people would say that Obama wouldn’t be the man for us as far as our tax breaks are concerned, but when you look at the overall picture and only a small percentage of us are making over $250,000, to judge your vote on that would be completely selfish. So I really didn’t care what the breakdown was on the tax brackets.

Kevin Love: I think Tyson Chandler said it best. There’s people in my family, there’s people in a lot of families that have been struggling. They don’t have much money and we’re in the upper one or two percentile in this country. If we have to take a little bit of a break from the money that we make and they’re gonna be able to live a happier life, then so be it.

SLAM: Did race influence your decision at all?

Sebastian Telfair: Absolutely. You can’t ignore the fact that this is going to be the first black President and the history of everything we’ve went through in this country. That was definitely a huge factor for me in becoming a part of history with that vote.

SLAM: What is the personal significance of America electing its first Black President?

Mark Madsen: I think it’s just a great statement about where we are as a country, that we can say ‘Who is the best candidate?’ and that any concerns-or what might have been concerns forty years ago-aren’t an issue today. And that’s the way it should be.

Sebastian Telfair: I’m pretty young, but I know a bit of my history and everything that we went through and all the obstacles we had to overcome. But to see that day, for me to be alive and know that my time saw the first black President, my Grandmother probably wouldn’t have even thought of that. She passed away last year, she didn’t get an opportunity to see this, but I know she’s smiling for everything that she went through.

Kevin Love: It’s great. It’s just us moving forward. I think he’s going to do a great job. He’s a great leader and he speaks very well and he’ll be able to create a lot of change.

Kevin Love: Oh my God, he can really speak. More than anyone I’ve seen.

SLAM: That might get you in trouble, a white guy calling a black guy articulate.

SLAM: It didn’t go too well for Joe Biden.

Kevin Love: People are people. That’s not who I am. Not what I’m about.

SLAM: What immediate changes do you expect to see once Obama is in the Oval Office?

Al Jefferson: For this war to end. I’ve got a lot of family over there and I’m ready for them to come home.

Ryan Gomes: I don’t know what to expect in the beginning. I think it’s going to be hard to just come in and flip a switch like that. I could take a year, it could take the whole term. You never know, so we’re just gonna have to wait and see. I think he’s going to do the best that he can, and I don’t know all the views or what’s going to change right away, but I’m going to be paying very close attention.

This was also Sebastian Telfair’s first game back from a questionable suspension and his heady play provided answers to several problems in the Wolves offense. Though both teams struggled through an abysmal first quarter, Bassy immediately corrected Minnesota’s course with the instinctual ball movement and tempo that fans pined for in his starting counterpart, Randy Foye. Bassy penetrates the lane with an ease that eldues Foye and the difference is vital in the timing of the teams offense. Foye pounds the ball at the top of the key, looking for a seam or a play and wasting valuable seconds off of the shot clock whereas Telfair can invade the paint and escape unscathed with enough time left on the 24 to feed Al Jefferson in the post with room to operate.

More importantly, Bassy has shown early signs of improvement on his much bemoaned jumper, exhibiting a sensibility in shot selection and a confidence in canning the open shot. If he can maintain opposing defenses respect, his quickness, vision and creativity with the rock will only be enhanced by the assortment of scorers and playmakers surrounding him. Telfair showed a real chemistry with Kevin Love as they pushed the ball off of a made or missed basket early and connected on a drive and kick that freed the forward up for three early in the second quarter. No one on the team may appreciate Love’s much ballyhooed outlet passes more than Telfair this season.

No one seemed to benefit more from Telfair’s return than Randy Foye. He seemed much more comfortable making plays from the off guard position as the spacing provied by Mike Miller’s hot shooting (10-19 FG, 5-7 3PT) gave him wider driving lanes and wide open jumpers. This helped break Foye out of his recent slump, with a 5-11 performance from the field and his nine assists would have been much more impressive if they hadn’t been overshadowed by two game changing turnovers.

With two seconds left in regulation the Wolves had the ball and a chance to break a tie game at 106 for the win. Rashad McCants had been substituted for Corey Brewer for his range and dexterity and the play was clearly for him as he curled from the baseline to the top of the key. But Foye inexplicably ignored an open McCants and ended up tossing the ball directly to Bruce Bowen for the ‘steal’. McCants, who up until this point had displayed a team centric attitude on the season, incredulousy-and repeatedly-mouthed to himself “Oh my God…” as he returned to the bench. I’m sure he wasn’t the only one.

Foye also had a costly traveling turnover with a minute left in the following overtime that deprived Minnesota of an opportunity to break another tie. Bassy had fouled out thirty seconds earlier, forcing Foye to take on the point again. Randy would do his best to redeem himself in the second OT with consecutive long range J’s to keep the Wolves close, but as the horn sounded on a heart breaking loss, he must have regretted those miscues that could’ve produced a different outcome.

While I was certainly excited to see Telfair back in uniform, I do have to address a small point. The last time these two teams met, I noted Bassy’s potential to duplicate Tony Parker’s game just as Al Jefferson has cloned Tim Duncan. Jefferson (30 & 14) and Duncan (30 & 16) both started slowly only to lock horns late in a classic duel of talented pivots. And Telfair had a good game off the bench (8 & 10), but it was made quite clear on this night that he will never be Tony Parker.

The knock on Parker early in his career was his jumpshot. Opponents would always go under on the pick and rolls with Duncan, forcing the frenchman to fire away from long range. This is still the strategy most teams use, as Parker from 20′ seems to be the lesser of two evils, but Tony has clearly grown comfortable with his shot and caught fire like never before, setting a Target Center record with a double nickel on the night almost exclusively on jumpers (Shaq’s 53 points was the previous high).

Telfair can compete with Parker in speed, quickness, ball handling, playcalling and may even develop a jumper to match, but the time spent on a championship roster under the tutelage of an exceptional taskmaster is hard to come by. And it gives Parker the confidence to shoot the ball 36 times without a second thought while dropping ten dimes on the night. Having spent his short lived career on sub .500 teams, Bassy could never conceive of such a thing.

So time will show us what the future has in store for Sebastian Telfair, but on this night Tony Parker showed us that his future just might end in Springfield.