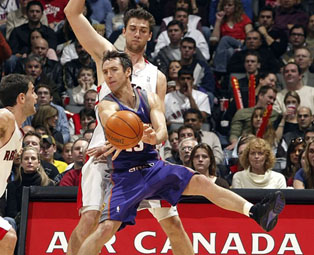 So it’s ’07 in Toronto and the Raptors are sitting atop the Atlantic. Hard to believe but hey, I’m sure they’ll take whatever they can get. On the other side of the board you have the Suns who are one of the hottest teams in the league winning an incredible 19 of their last 21.

These factors combined with the school break for the kids and the return of Steve Nash to his home and native land meant a sellout at the ACC on Wednesday night.

“Man, I hate it when the Suns are here…well, besides watching them play…it’s so much more work” said one reporter to me before the game. And it’s true; whenever Steve “The System” Nash rolls into the T-dot, the media comes out in full force. In the pre-game press conference, Sam Mitchell was razzing a reporter for only showing up when Kobe or Shaq were in town. Sam also made a point that “we’re not at that point right now where we can run with them” reemphasizing how the Raptors need to be able to play at a more controlled pace to win games.

Jalen was getting in his “hellos” before game playing the P.R. role he seems to have assumed in the past few years. I remember when Jalen was here in Toronto, he always had the sickest Jordans so I found it interesting that he was now rockin’ a pair of Adidas; guess he’s going back to the ‘Ratball’ days where him and Stacy Augmon were the poster-boys for the 3-stripes.

Kurt Thomas and Pat Burke were amusing themselves watching Canadian sports personality, Cabbie, work over Raja Bell. Burke then launched a bottle at the garbage can and bricked it requiring a tip in by one of Cabbie’s boys. Opposite Kurt was Eric Piakowski who looked like he just got into a fight sporting what appeared to be a swollen eye.

Beside me was Marion chowing down on a platter of chicken fingers and fries as a pre-game meal. He even had one of those individually sized ketchup bottles for dipping (incidentally, did you know that Canada consumes the most ketchup per capita in the world?). Showing the unselfish attitude that is the Suns, Marion offered some chicken to James Jones who politely declined. Assistant coach Marc Iavaroni then strolled over and started chatting to the Matrix about catfish. On a sidenote, Marion’s Nikes looked pretty cool with the ‘Matrix’ tag in the original movie font on the side.

The trainer’s table in the middle of the room featured a buffet of goodies including a fruit platter, Double Bubble, Bayer, Tylenol, and Aleve. On the coaches’ board, there were notes like: “force all cutters to the middle, no baseline” and working a possible Calderon mismatch.

Out on the court, Nash was going through his usual pre-game routine of form-shooting around the horn from about 6 feet and then slowly moving out towards the arc. On the flipside, Marion was jacking 3s from all over the place; if you’ve never seen Marion’s shot in real life…it’s quite a thing to behold…the way he catches the ball, twists it into his shooting pocket and flicks it out of his hands…painful, yet amusing to watch…

Looking down at the other end of the court, I saw CB4 involved in extensive 3-point shooting drills as well. I wondered: is this something that we as Raptor fans should be concerned about? Or embrace?

So here are some notes I churned out during the game:

– TJ Ford and Garbajosa (who was teased by some of his teammates for his resemblance to Borat) are not playing
1st Quarter:
– 10:55 – Bosh is looking good and not showing any ill-effects from the time off taking the ball at Amare and finishing with a spin move
– 10:26 – On right wing, ‘The System’ shows his ball wizardry and completes a post entry pass by throwing it through the legs of a Raptor defender
– 9:05 – Oh shi*…Nash throws ahead to Raja, who tosses the rock back to a trailing Amare who FLUSHES in Rasho’s grill
– 7:38 – Marion jumps the passing lane, gets loose on the break, shows the ball to Parker who’s chasing him, and then throws down a vicious one hander…this is starting to get ugly…
– 6:58 – Man, Jose is going to get it tomorrow in practice: Calderon doesn’t take his uncontested layup and instead drops the rock off to Parker who gets stuffed by Diaw
– How can you tell someone is bootleg media? When they clap every time the Raptors score
– Andrea is tearing it up with 7 points in 3 minutes of play (a trey, a reverse layup, and a midrange J)
2nd quarter
– 5:50 – Bosh gets a rebound then throws it down over James Jones and hangs on the rim with one hand spinning around like LaPhonso Ellis
– 3:53 – Diaw finishes a finger-roll off glass plus-one after a nifty behind the back pass from Nash (I hate the word ‘nifty’ but for Nash, it seems to be an appropriate descriptor)
– 2:58 – Bosh REJECTS a Marion dunk attempt…and of course on the subsequent possession, Bell comes back and nails a 3
HALFTIME
– STAT and CB4 are having a great battle with lines of 13, 5 and 2 blks and 11, 7, and 2blks respectively
3rd quarter
– 10:19 – Calderon pushes the rock up court and dishes to Anthony Parker on the left wing who throws down something fierce on Borris Diaw
– The Raps employ a 3-headed monster lineup of Bosh, Rasho and Andrea with Andrea playing the 3-spot
– Wow…Raja Bell catches Andrea on an iso from the wing and is unable to get by him on two attempts! The Italian Stallion has foot-speed!
– The Raptors are now employing some sort of strange match-up zone. It looks like a 3-2 with Bosh at the top, but then when Nash ran the baseline to the other side, Jose followed him through to the other side. Box and 1? Probably not…more likely that Jose just got confused
– The Suns are starting to bust open the game…and interestingly, it’s through defense (drawing charges, stealing the ball, blocked shots, etc.)
– Hmmm…the Dance Pak is sponsored by Axe body spray…you know…sometimes I like to smell like an Axe…
– Raptor announcer mistakenly yells “Uno, Dos, Tres” when Andrea hits a trey forgetting that he is not part of the Spanish contingent on the team
4th quarter
– 8:48 – Barbosa breaks Darrick Martin’s ankle forcing him to fall down after a shake move towards the baseline
– 7:48 – Raptors on a run closing the gap to 1 point spearheaded by, of all people, Darrick Martin
– Coming out of the timeout, the Suns employ the Matrix to try and shut down D-Mart
– Can you believe this: 7:13 left in the game and the Raptors are up 1?!?!?
– 1:23 – CB4 fouls STAT out of the game with a looping layup and completes the 3-point play putting the Raps up by 1
– 0:43 – Crap…Nash draws a foul attempting a 3 on Bosh and buries all 3 freebies to put the Suns back on top (and I have no idea why the 3-steps to putting your “D*** in a Box” pops up in my head at this point…)
– 0:32 – Andrea gets called for an offensive foul and on the ensuing possession, Nash hits the dagger nailing a fade-away to put the Suns up 99-95
– Last ditch attempt: Anthony Parker hits a trey to close the gap to 1 but with 3 seconds left, Marion hits 1-of-2 free throws to end the game

In the Raptors locker room after the game:
– I noticed that all the Raptor players had in their locker: a bottle of some alcoholic beverage and a book entitled “Succeed on your Own Terms” by Greenberg and Sweeney. As it turns out, this was their X’mas present from the company. And oh yes, they also got PS3s…
– Speaking of books, I gotta give a shout-out to my man David Goldstein (who is also an avid Linkstigator) who just finished writing the Jamaal Magloire Biography (www.jamaalmagloireabiography.com). The cool thing about the Dave is that he’s going to donate every penny of what he makes on the book to the “Youth Deserve a Chance to Dream Foundation” which is Jamaal’s not-for-profit organization so check it out if you can

After the game, I decided to head to dinner with one of my boys. As we pulled to a red light on Bay St., CB4 and his cousin rolled up on our left (in a black Lex) and Uros Slokar on our right (in a Chrysler 300). Chris then rolled down his window and yelled “Fast and Furious baby!” and Uros stared us down while revving his engine. As soon as the green light hit, we tore up Bay St. at…30 mph. Yup, that’s the life of NBA players: always pushing the tempo…unless you play for the Raptors…