Game Twos and the players that won them 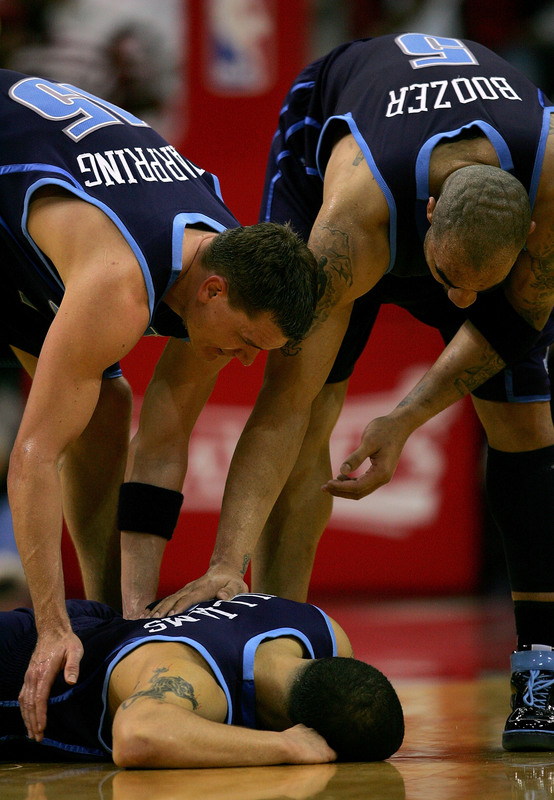 I still don’t have a name for this Playoff player of the D.A.Y., but since both games last night were game twos, I can throw two into the title for now. There were some good suggestions yesterday, but I still have a little time before committing. This is a work in progress.

In the Detroit game, I should probably give it to whichever ref threw the jump ball for the tip-off, cause the game was over by that point. Since I wasn’t watching and have no idea what that refs name is, I will give it to Rasheed Wallace, whom the Magic have no answer for. If Dwight Howard is going to nurse his mystery flu, they might as well run everything through Darko and let him pad his stats so his trade value will go up. Then again, whatever.

Houston’s win had a lot to do with free throws and the mysterious Kirilenko benching. I am going to give the award to Shane Battier though. Whenever a team wins, it has to do with his intangibles. Also, he accidentally smashed Deron Williams in the head. Have you ever heard the expression “Kill the head and the body dies?” Utah needs Deron to run the show, and that’s tough to do when he’s seeing double. Boozer had a monster night, especially when you look at Memo and Andrei’s stat lines or lack thereof. Too bad they lost. McGrady did score 31 but he shot 14 free throws, and T-Mac is not a guy that wants to absorb a lot of contact, for good cause. His back is ready to give out any minute now. His body is just built weird or something. Yao got his, but it wasn’t the ARRRRGHHH I AM YAO kind of dominance you’d like to see.

Shane Battier. Intangibles. On the air, Fratello glowed about his time in Memphis with him. Then he mentioned Bonzi Wells in passing with fewer compliments.