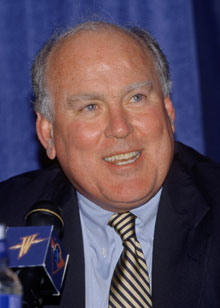 Garry St. Jean, the longtime NBA coach and former Warriors front office exec, chose the place himself, and once inside I could see why.

It was in the self-consciously quaint downtown of the posh Oakland suburb St. Jean calls home, but the restaurant was a well-worn bar/burger joint with that instantly familiar greasy smell. In the old days, when NBA teams flew commercial and beer was served in the locker room after games, it would have been the type of place coaches would go to chop it up.

St. Jean, now a studio analyst on Warriors’ TV broadcasts, agreed to do just that in an exclusive talk with SLAM about the Warriors’ upcoming season. Except instead of Miller Lite and burgers, the coach went with Diet Coke and a salad. The milieu may be familiar, but times have changed.

SLAM: How would you describe the evolution of the Warriors over the past year?

Garry St. Jean: They have earned respect, from top to bottom: Ownership, all aspects of the business side, the front office, and (head coach) Mark Jackson. And as far as the players go, they built a locker room with no turkeys. Not having any ding-dongs in the locker room is not an easy thing to achieve. The fact that Dwight Howard was willing to talk to them showed respect.

SLAM: What do you like most about the Andre Iguodala acquisition?

GSJ: Iguodala brings something they needed last year—another player who can get out in transition and finish at the rim. And he elevates the defense—he can guard 1 through 4. He’s a winner and a solid leader. He is really going to pay off this year.

SLAM: In Milwaukee you helped build an offense around Paul Pressey as the “point forward.” How will the Warriors build on Iguodala’s point-forward capabilities?

GSJ: You can run pick and rolls with [Stephen] Curry, but he’s at the point now where everybody is going to blitz him, and they’re not going to let him get a shot. But now you can run him on floppy, off baseline screens. You can run it with both him and [Klay] Thompson. Iguodala will be able to trigger the play. It will be a nightmare to defend. If I were Mark Jackson, I’d go to sleep with a pad of paper next to the bed. He is going to be dreaming up plays. (Makes a scribbling motion…) Bing! Two points.

SLAM: Is it fair to assume that we’ll see some small lineups, with Harrison Barnes shifting to power forward, especially with Festus Ezeli injured?

GSJ: At times all four of them (Curry, Thompson, Iguodala and Barnes) will be on the court at the same time. But whether they’re all on the floor together or not, it gives the Warriors great flexibility.

SLAM: Defensively, how will Barnes adjust to the 4-spot?

GSJ: The NBA is reverting to what it was like 40 years ago, and that’s not a bad thing. They’ve brought back zone defenses and made other rule changes so that the game is about team defense and motion again. Remember those big, Charles Oakley and Karl Malone types—250-pound, 260-pound power forwards? You don’t have to have that anymore. You can live with Ryan Anderson or a stretch 4. Look at LaMarcus Aldridge: He can knock down 15-footers as good as any 3.

SLAM: Curry is sort of a throwback too, to when there were more combo guards.

We’re going back 40 years, back to where we’ll play two guards, instead of making the two guard spots into two separate positions. You don’t have to have a point. We used to stereotype positions. To play 2-guard you had to be Mitch Richmond: 6-5, 215 pounds, Michael Jordan, Sidney Moncrief, Michael Finley, that was the size. Things are changing.

SLAM: Thompson and Iguodala would seem to give the Warriors a formidable perimeter defense…

GSJ: I don’t think Klay got enough credit last season for the job he did defensively. He would guard Chris Paul in Los Angeles. He would guard Carmelo Anthony in New York. And his offensive game isn’t anywhere near as good as it’s going to be.

SLAM: What do you think about the losses of Carl Landry and Jarrett Jack?

GSJ: If the Warriors had re-signed them both, they would have gone way over the cap and into the luxury tax. You might ask why didn’t they just re-sign one of them to stay under the cap, but I think they’ve got bigger aspirations. You need to keep your payroll structure where it needs to be and make sure that most of your money goes to your best players. You don’t get Iguodala unless Jack and Landry leave and you make the deal with Utah.

SLAM: What does Toney Douglas bring to this year’s team?

GSJ: To me, signing Toney Douglas was a nice move. He is not a great distributor, but he is a tough defender. He defended Curry really well the two times he played him, and he can make a drift three. The key, again, is defense.

SLAM: Last season David Lee became the first Warriors player to make the All-Star team in over 15 years. How did he improve? Or did he?

GSJ: Lee became a better team defender. I’ll give you two examples. Last year he made great strides in his commitment to verbalize on defense. Your big guys are in the back, and they see everything. They can talk to the guys out front and tell them, “pick left,” “pick right,” or “they’re playing it blue,” “they’re playing it green” on the pick and roll. He also bought into being much more aggressive in defending the pick and roll. Now he’s out there showing and going really hard on the screen. He didn’t do that as much before.

SLAM: The Warriors face a huge decision at the end of the season when Andrew Bogut becomes a free agent. As a former GM, how would you handle a situation like this, with a player who is very talented, played a crucial role in Playoffs last year, but who is injured a lot?

GSJ: The thing I respect about Andrew Bogut is that he’s accountable and responsible. He is a mature veteran. I’d like to think you’re going to be able to negotiate with him, and I think he really liked playing in the Playoffs. You have to say, ‘Let’s not negotiate where I lose and you win. How about we do this so we both win?’ Maybe it’s a shorter deal with more money—something that is going to be amenable to both sides. There are nice relationships in place between the management and players, and I don’t sense that the players just want to pick it up and go.

SLAM: So you would re-sign him and accept the risks?

GSJ: If Bogut is healthy, they’re a different team. You saw it in those Playoff games. They don’t win them without him. Now, can he jump over this ketchup bottle? (St. Jean held up a big plastic bottle of Heinz for emphasis.) Debatable. But he has things you can’t teach: He has timing. He has instinct. He has feel. He can also guard the other team’s big man one-on-one. He can position rebound. He plays team defense. If he and Curry stay healthy, the Warriors have a chance to go far. They have a chance to be a top-four team in the West.