Gary and the Nets 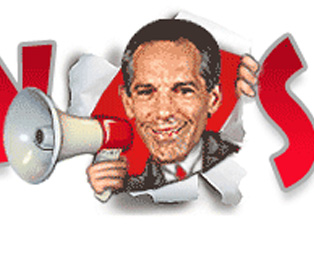 One of our favorite media relations guys in the NBA is Gary Sussman over with the New Jersey Nets. He’s a nice guy, fun to talk to, and he does his job instead of slacking off, unlike (unfortunately) a lot of PR people. And sure, maybe Sussman is still holding a grudge over Russ selecting the Nets as having the worst press food in the NBA, but I’m willing to guess that must mean Sussman enjoys the “chicken diablo.” They do get points for the hot dogs at halftime, though.

Anyway, a few weeks ago we discovered Sussman’s blog on the Nets website. Blogs by people who work in media or public relations can be a bad idea, as by definition their job involves crafting the public perception of their team/company. So news that might be relevant (in a negative way) to their employer would probably get overlooked.

But Sussman’s blog isn’t about that; it’s more of an insider look at what’s going on day-to-day with the Nets players and staff. And one thing that makes it interesting is the way Sussman writes it: almost in code, with cryptic nicknames for everyone.

The guys at NetsDaily tried to read between the lines on some of Sussman’s dot-dot-dot notes, and I’ve spent part of the afternoon trying to decode some of Sussman’s diminutives. I am happy to publish this primer for the Sussman Sez Blog:

• The LG — Nets coach Lawrence Frank, who is also referred to in the blog as Little General, which seems like an awfully uninspired title since everyone knows that’s Avery Johnson’s nickname, and has been for over a decade now. I prefer Frank’s name here on The Links: Li’l Larry Frank.

• The Travelin’ Man — I thought this could be Clifford Robinson, because the Doobie Brothers once had a song called Travelin’ Man and last season Cliff…well…doobie…well, you know. But that wouldn’t make any sense because Sussman talks about The Travelin’ Man heading the group that represented the Nets at the NY Basketball Hall of Fame dinner last week — don’t think Cliffy would be up for that. Ah…but on September 14, Sussman explains that the Travelin’ Man is the Nets GM, Ed Stefanski.

• The Teardrop — Nets announcer Mark Jackson, for the running jumper he patented during his NBA career.

• The Marist VP — I went through last season’s media guide and couldn’t figure this out, then I just googled Marist VP Nets and found this.

• RJ — Richard Jefferson, who definitely needs a better nickname within the blog. Sussman makes repeated references to Jefferson putting on a lot of muscle in the offseason, noting his looks “a bit like Bonds.” Hmm…

• Beadle Juice — New Nets announcer (sideline reporter?) Michelle Beadle, who is often referred to in positive terms within the Blog. Wonder why?

• Creedence Clearwater (a.k.a. The Maestro) — Must be Chris Creed, who writes for NJNets.com.