We caught up with Gary Payton to talk about this year's All-Star Game, how he used to make fun of Karl Malone and who he would pick for his ASG starters. 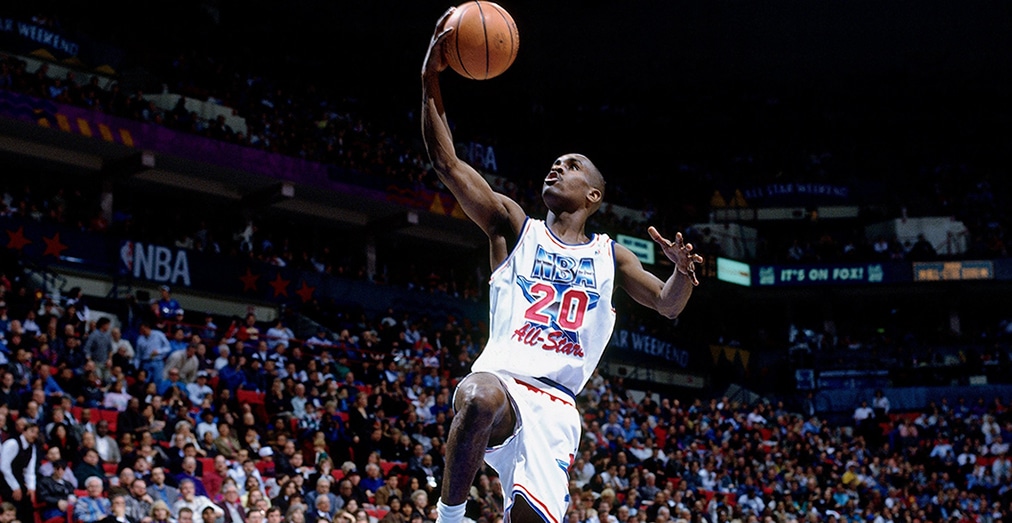 Back in October, the NBA announced it was axing its annual East vs. West format to the All-Star Game. Instead of combining the best players from each conference, two captains would draft teams from a pool of players voted as starters and reserves, making selections regardless of affiliation. Captains, who would also serve as starters, are named by whoever received the most fan votes in his respective conference. (As of last week’s first voting returns, Giannis Antetokounmpo is leading the East with 863,416 votes and Kevin Durant leads the West with 767,402.)

The potential player possibilities were endless and the new format has stirred up a plethora of questions and hypothetical captains and lineups, so we caught up with Gary Payton, a nine-time All-Star, to get his thoughts on the new format, which players he’d handpick for his squad, who deserves to be an All-Star this year and more.

SLAM: What were your initial thoughts when you heard of the new NBA All-Star voting process?

Gary Payton: I thought the really great thing about it is it gives more people more involvement with the voting, and then it gives the players a voting opportunity because they play against these players all the time. So it’ll make it more legit. Sometimes players get hurt, some of them get voted in and the other players might be playing very, very well and not have an opportunity. I thought that that was a good opportunity and idea of what the NBA came up with.

SLAM: Did you ever think the NBA would change its East vs. West format?

GP: Didn’t think that was going to come. When Adam Silver announced that we’re going to have captains and they’re get to pick their teams like a playground, I said now that’s going to be OK. To try it here in L.A., where you know a lot of pickup basketball is played and now you get to pick and it’s not just an East against West but it’s everybody, it’s going to be pretty good.

SLAM: If this was around during your time and you were asked to be a captain, who are the other four players you’re choosing?

GP: [Laughs]. It depends because you know how it’s going to go. One person might pick and then my player might not be there. But if I would’ve had an opportunity to pick my four, I would’ve had to go with John Stockton, Karl Malone, Shaquille [O’Neal] and I’d probably try to get Allen Iverson.

SLAM: So you’d still want to play against guys like Michael Jordan and Magic Johnson?

GP: I want to play against those guys. It makes the game better when you don’t stay with the guys that are good as you are and it’s not an even game. When you play against guys you want to compete against, then that means you’re going to compete hard because you picked these certain guys and they say, ‘OK, you didn’t wanna pick me? We going go at it.’ So that’s what I want. I want to go at a guy that got the same mentality as me as that you didn’t pick me, I’m going to go at you every time in this game. And that’s what’ll make it very interesting.

SLAM: Who do you think deserves to be an All-Star next month?

GP: Giannis is playing very well in Milwaukee. I think [Karl-Anthony] Towns from Minnesota who hasn’t been an All-Star deserves to be an All-Star. We’re still looking at the same guys who have done it and are doing it well. I think these kids—[Andrew] Wiggins, he deserves to be an All-Star—never been an All-Star. These type of guys need to just get a feel for it and I think they’re going to breakthrough eventually. But we still got the top guys who are playing very well and we can’t take that away from them. The West has gotten tougher, so that’s a big problem; the East is up there now and they have a lot of good rookies that have a chance—Ben Simmons and [Joel] Embiid got a chance. I think he and Embiid are going to be All-Stars. These are going to be first-time All-Stars and I think it’s going to be a good fit for the NBA to see these young talents come in and be in their first year and get an All-Star bid. Boston’s got [Jayson] Tatum and he’s playing really well. You know, there’s a lot of players that can play.

SLAM: What were some of your favorite All-Star Weekend festivities?

GP: The best times for me was riding on them buses, going to practice, going to the Players’ Association party and doing things like that. Then you have all your tennis shoes things—adidas things and Nike stuff—going to all these types of situations. All the stuff for the kids. It was just beautiful just going to see that. When I was playing, I couldn’t really see that because they had us doing a lot of stuff. They had us doing Media Day and stuff like that, but now not being a player and not being in the NBA, going to see this stuff for yourself like the fan zone—all that stuff is great to go see with your kids and walk around and see the things that the NBA has now put together for fans to see their favorite player putting up the big ole boards where you can stand against them and put your hand out and do all that stuff. But especially bringing us in there to make appearances and do signings is even better because you get to see one of your legends players that you’ve never seen come, sign autographs and interact with them.

GP: [Laughs]. See, that’s why I’m glad there was no social media. When we were in our locker room or on our buses, we used to do a lot of stuff [like] good pranks. We used to talk about a lot of guys and do a lot of things, but it’s stories that you sit there and just talk to these guys and get to understand them. We always used to talk about who’s the No. 1 team and after this [All-Star] game you’re going to have to play us on Tuesday. And I’m going to get some reps because I’m going to bust you when I see you Tuesday. We used to always crack on each other and that was a big thing about me. I’m going in there imitating Karl Malone. He always used to wear jeans and cowboy boots, and when he went out there to practice, I put on his cowboy boots and his jeans; and they were big and would yell, ‘Rhinestone Cowboy.’ I used to always do that to him every time…I had his belt, everything, and then I put some tobacco in my mouth. We used to do all kinds of stuff, so it was real, real fun.

SLAM: Is there a favorite All-Star Game memory that sticks out to you?

GP: We had some good ones. The Michael Jordan time when the West was up about 20 and he willed his team back… I think the most satisfying one to me was in Phoenix when me and Mitch Richmond and I had like 17 or 18 assists and [he] got MVP because I kept feeding him. But you remember them types of games because the crowd was so hyped and we came back and won the basketball game. You remember stuff like that because it was really, really fun…it was really competitive. We started to play in the third and fourth quarter. We’ll cruise for one or two quarters, but then we’ll get the lead and be in the huddle and then we’ll be like, ‘It’s time to go, you guys. It’s time for us to play’. And that was big for us.

SLAM: Who are some of the players you’ve been keeping tabs on this season?

GP: Giannis from Milwaukee—I love watching him play. [Russell] Westbrook is one of my favorites. Isaiah Thomas is one of my favorites. I’ve really gotten keen to [Jimmy] Butler [who’s] playing exceptional ball in Minnesota. The kid that I really like as a rookie—there’s two of them—is the kid from Utah (Donovan Mitchell) and [Kyle] Kuzma for the Lakers. I think he was a big steal for the Lakers for them to draft up and see him because I’ve seen him play for years at the University of Utah, and I said he was going to be a good basketball player and what happened? He turned out to be a top rookie now that he’s scoring the basketball. Just to be able to see these kids play—Tatum out there in Boston has been playing very well. I’ve had him at Nike Elite camps for the last three years and I’ve always said he can play like a Glenn Robinson or Glen Rice because he can shoot the basketball at will. Now that they’re expanding his range to the 3-pointer out in Boston, they’re giving him an opportunity and he’s looking better.

SLAM: It’s obviously still early, but who’s your pick for Rookie of the Year?

GP: That’s a good one. I think I’m going to have to give it to Ben Simmons. He’s doing a very great job out in Philadelphia. The Mitchell kid from Utah is playing exceptionally well and Kuzma. That would be my top three, four now, but I’ll have Ben winning it if it would go down today.

NBA All-Star Voting presented by Verizon is open until Jan. 15., via NBA.com and the NBA App. Tickets for all All-Star fan events are now available on NBATickets.com. 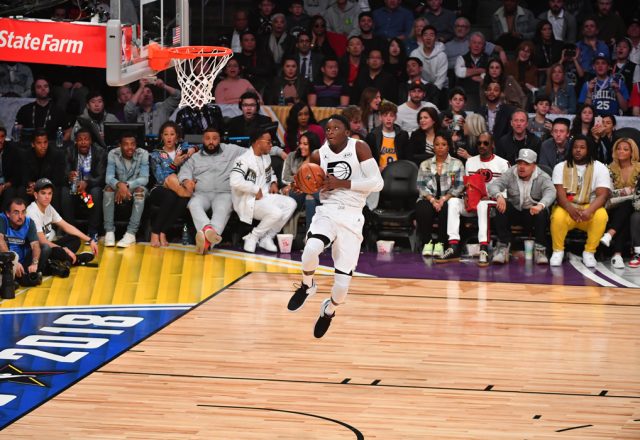 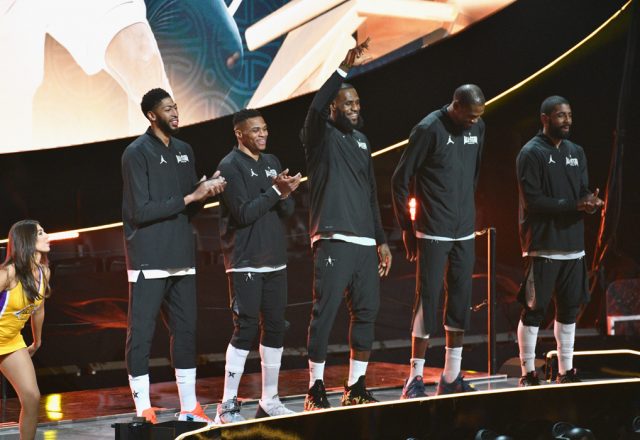