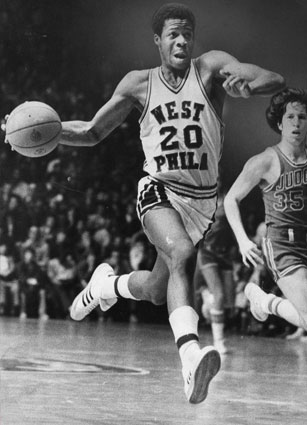 The game has taken him to four continents and almost a dozen time zones.

From every major city in America to the hoops hinterlands in between. From the bluffs of Wisconsin that overlook the Mississippi River to the mountains of rural West Virginia. From Italy and France to Israel and Argentina.

Gene Banks has used basketball to traverse the globe.

The journey began in the 1970s amidst the asphalt jungle and urban blight of decaying row houses in West Philadelphia. Undoubtedly the best player the city had produced in the more than 20 years since Wilt Chamberlain toyed with his high school opponents, the teenage Banks learned how to assert his will on the court through a combination of power and finesse. The 6-7 forward poured the foundation for Pennsylvania’s longest scholastic winning streak and became the state’s first McDonald’s All-American as a senior in 1977. Along with Brooklyn’s Albert King, the subject of the streetball gospel Heaven Is a Playground, Banks was the object of every college coach’s affection and even garnered more love than Detroit’s Magic Johnson.

“It freaks me out,” Banks said, “when I think about the history our team made in high school.”

As his West Philadelphia teammates relished their rock-star status as the Rolling Stones of amateur basketball, the squad’s afro-rocking, Mick Jagger-like front man preferred to deflect the attention elsewhere. The old-school Banks was preoccupied more with the numbers in the win-loss column and less with the ones in the box score.

“I took pride in doing the little things that aren’t documented on a stat sheet,” he said. “I know it sounds ironic, but I’m happy to say that I’m not my school’s all-time leading scorer. I don’t think I played in the fourth quarter more than a handful of times, and never really had a problem with it.

“I was more concerned with diving for loose balls that were headed out of bounds, boxing out so a teammate could grab a board, hedging a screen, or making a good outlet pass to initiate a fast break. The sum of those efforts usually equals a victory.”

For Banks and the Speedboys, it did 79 times in 81 games and culminated in three city titles.

Banks registered 1,694 career points and contributed to a string of victories that climaxed at 68 after his graduation and spanned three seasons from 1976-1978. So good were the Speedboys that they occasionally opened for the 76ers at the Spectrum.

“Our gym barely sat more than 100 fans,” Banks said, “and our coach (Joey Goldenberg) had the foresight to leave holes in our schedule for potential opponents and market our team with the powers that be. The Sixers were gracious enough to allow the city to watch us in a larger capacity. It worked out well for them, though, because their attendance went through the roof.”

In ’76-77, Banks steered West to a 30-0 record and recognition as the best high school team in the country. The Philadelphia Daily News was so enthralled by the Speedboys that season that it had a reporter cover every one of their outings.

West’s signature victory was achieved almost 250 miles from home in the Johnstown War Memorial Classic over Christmas break. Banks posted 32 points, 19 rebounds and 5 assists in a 69-65 conquest of Brashear, the reigning PIAA Class AAA champion from the Pittsburgh City League. (Members of the Philadelphia Public League weren’t eligible to vie for state crowns until ’04-05.) The Bullets boasted Pitt-bound bruiser Sam Clancy, who competed as a defensive lineman for a decade in the NFL after playing only in hoops in college, and Cincinnati signee David “Puffy” Kennedy, a budding draft pick of the Mavericks.

“We were so evenly matched that people were calling it Ali versus Frazier,” Banks said. “We played some tough teams, like Dunbar from Baltimore, and beat them all. We weren’t invincible, but it sure felt like it.”

“Those guys were the real deal,” Clancy, Pitt’s all-time leading rebounder, said of West Philadelphia. “Even so, we had a chance in the last few seconds. I missed a put-back when I tried to finger roll it, instead of dunking it. I didn’t think I elevated enough to throw it down, but when I saw the tape I did.”

West’s success only compounded the burden of Banks’ recruitment.

“The interest [from colleges] was fun at first,” he said, “but it got old fast. There were times when I’d come home from practice and a coach would be sprawled out on my couch. [NC State coach] Norm Sloan in particular loved my mother’s fried chicken and mashed potatoes. After dinner, he’d just lie down and wait for me.

“After a while, I’d have to peek in the window before going inside. If a coach was there, I’d leave and spend the night with a friend.”

The hectic process came to an end when Banks, who scored fewer than 700 points on the SATs and who had to attend night classes to graduate, inked with Duke. Before doing so, though, he had to meet on more than one instance with a 10-person panel of administrators and faculty before one of the world’s most prestigious institutions would open its doors to him.

“It was divine intervention,” he said. “I knew nothing about Duke, only that they got involved late. Their coach, Bill Foster, dropped off a book about the university, not its basketball team. And my history tutor told me it was a great academic school, so I figured it was worth a visit. Luckily, the Duke people looked into my character and viewed me as a total package. From a basketball standpoint, though, I still wasn’t convinced, in part because their team finished in the basement of the ACC the last five years.

“Finally, when I had to make my decision, my mother locked me in my room and told me to pray. I did and fell asleep, dreaming of turning the program around and going to the Final Four.

“Then I got there, and we went from the outhouse to the penthouse.”

Banks earned ACC ROY honors as a freshman on Tobacco Road and helped the Blue Devils advance to the championship game of the 1978 NCAA Tournament. A starter from the minute he arrived on campus and an All-ACC selection in 1981, Banks remains one of the program’s top scorers, rebounders, passers and defenders.

His fast-break flush on 7-4 Ralph Sampson, Virginia’s three-time national POY, as well as his game-tying buzzer-beater and game-winner in overtime as a senior against rival North Carolina are popular YouTube hits.

“Gene was certainly the most heralded recruit I ever signed,” said Foster, the 1978 NABC Coach of the Year and the first NCAA skipper to guide four different programs—Rutgers, Utah and South Carolina were the others—to 20-win seasons. “His commitment stunned the college basketball world. With his size, strength and unselfishness, he was the perfect embodiment of the Philadelphia player.

“I think we caught a break with him and his mother wanting him to go to a good academic school. He didn’t have the best grades, but he was so highly recommended by teachers, guidance counselors and the community. And it didn’t take much time for him to prove he belonged there.”