Get ready for the half D.A.Y. 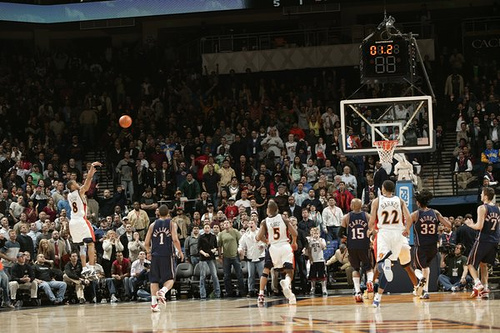 By Sam Rubenstein
I mentioned this in the Player of the D.A.Y. yesterday, and it needs to be said again. I went to the Met to see La Boheme last night. I’ve been a little fluish all week, and normally I wouldn’t have gone but this was planned too far in advance to turn down. So, I did not watch one second of basketball or TV last night. Of course it would end up being one of the most exciting nights around the legaue this season. Typical. I don’t know why I’m going off on this tangent. I’ve been trying my best to just focus on writing about basketball, but I’m dealing with some internal ethical problems this week. One of my best friend’s father passed away on Saturday, and all I can think about is how I really haven’t been that good of a friend to him lately, and that we’re only talking now because of his dad. It makes me feel like a big phony, and I’ve always prided myself on being anything but that. I’ve had a few instances in my life where someone dies and it shakes me up pretty badly, and I can feel it happening again. On that note, I can’t write basketball recaps with my usual enthusiasm right now. This really isn’t the forum for those kind of thoughts, and I probably shouldn’t admit things like that, but what can I say, I’m human and I’m just not myself right now.
Today I’d like to just rip through last night’s action, linking to blogger recaps, and later on I’ll have the midseason D.A.Y. recap.

Applesker was at the Knicks-Suns game last night, so there should be Game Notes later on… After Lang finally unvelied our new LeBron cover and Bron’s quote about how he can relax and still dominate, the Cavs lost at home in Double OT to Andre Iguodala’s 76ers. Shaq and Wade came back from their injuries, the Pacers came back from down 20 to beat the Heat in OT…  Memphis played their game of the year, beating Utah with a triple double from Pau Gasol and a buzzer beater from Eddie Jones. I’m struggling to find a blogger recap of this game. I’ve already reached out to the biggest Grizzlies fan I know to become the Memphis blogger in the SLAM blog project I’ve been assigned to assemble, but he might have conflict of interest problems. There is plenty of room for Memphis and Utah B-ball blogging out there… Golden State of Mind is all over the Warriors game of the year featuring a buzzer-beater from Monta Ellis to send the Nets to what feels like their 30th soul-crushing, season-crippling loss of the year… McGrady vs. Duncan ended up as another dominant T-Mac night against the Spurs. The Rockets and Spurs have had some great games the past few years featuring monster comebacks and collapses from each side. Let’s hope they meet up in the playoffs, as long as it doesn’t get in the way of Dallas-Phoenix… Randy Wittman’s debut as coach of the T-Wolves went to overtime and ended with a loss to the Blazers who did it with their youth and 22 and 15 with 6 turnovers from Z-Bo (by the way I guess I should mention that my first feature for SLAM is the Zach Randolph story which you can see on the image of the cover described as “Gangsta Ballin'”)… Toronto beat New Orleans behind 35 from Chris Bosh in yet another close game… Ron Artest led the Kings over the Bucks… And finally the two games that weren’t that great are the Hawks 82-76 win over the Celtics and the Pistons getting their revenge over a Bobcats team that always beats them.

There you have it. An exciting regular season night around the league, which I was unable to enjoy. Hope you all click on all of the links above to read more thorough reactions. Stay tuned for the midseason stuff.