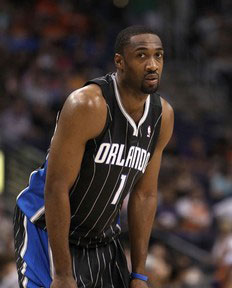 Averaging eight points on 34 percent shooting, including 26 percent from three with the Magic, Gilbert Arenas has been grounded by injuries. His game is jump shot reliant and he lacks the legs underneath him to provide the spring in his release. Arenas used to use his jumper to dare his defender from any spot on the floor. Now, his limitations have forced him to assume a more modest identity as a player.

Arenas has a quick ability to disarm with his honesty. While he had spoken about a new beginning with the Magic after the trade, the effects of injuries remain an ever-present shadow. Arenas recognizes that sometimes as an athlete it is easy to push yourself beyond limitations because that’s what you know. The hard part is learning to play within them and separating the mental from the physical.

After the Magic’s loss to the Hawks, he spoke about the process of recovery.

SLAM: Do you think as an athlete, sometimes it’s mind over body, [where] you think you can push yourself to do things even during the rehabilitation process?

Gilbert Arenas: Yeah, you know when you’re an athlete and you’re a competitor, you can convince yourself to do anything. Sometimes—95 percent of the time—it’s the wrong thing to do. It’s something when you’re growing up, you’re just taught ‘just play through the pain, play through the pain.’ So you know, I think that hurt me a while trying to rehab my knee back because when I felt that I could do something, I’m gonna go out there and do it.

SLAM: Do you think that people don’t realize how much of a mental adjustment it is to return from injury?

GA: They see us how we used to be and they don’t understand. We work so hard to try to get back and sometimes, we’re overworking but that’s all we know. That’s all we know is just to work hard. Even though my knee can’t take six hours, if I know to work six hours, that’s all I’m gonna do. And then I deal with what happens later (such as) Oh, I can’t work out for the next two months…It’s a big adjustment because now when you’re out there playing, it’s like you want to go into the lane and jump like I know I can jump, but when I go in there I just don’t jump because I’m scared to jump. I have no idea why. I feel like it’s like I’m scared to go in and jump off my left leg but I know I can. I can see whenever I go for a rebound, I’m at the rim but if I try to make a layup, I don’t even try to explode up for some reason.

SLAM: Do you think time is key for the mental and physical aspects to come together?

GA: It’s just repetition. I know that’s one of my problems that I’m not jumping the way I should be so it kind of gets me scared a little bit of driving to the lane and go and explode. I don’t know why I’m nervous about it. I know there’s nothing wrong. It’s just mentally; it’s just a mental thing.