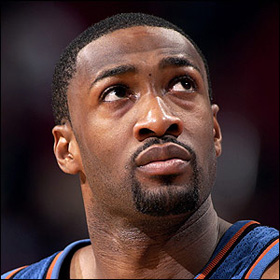 You know, I don’t think Gil was kidding when he said he was embarking on a mission he called The Takeover last season. Dude is everywhere; he has his own shoe, he’s on the cover of video games, and now, he’s about to appear in a cartoon series.

Inspired in part by the popularity of his blog, Gilbert Arenas is bringing Gilbertology to a library, TV and laptop near you. In addition to writing a hoops-themed self-help book, the quirky Wizards guard will be the gaming guru in a video series for FoxSports.com, and is pitching a reality series that would place him in Simple Life-like settings, tentatively shooting next year.

Agent Zero is also developing a cartoon series centering on himself as a child. How that would differ from his real life is unclear.

You know you’re going to watch the toon series, but will it be any good? It’s hard to tell at the moment, what with the scarce details and all, but I’m going to guess that it’ll at least be watchable. To be honest, I’m more excited about the possibility of a reality TV show starring Gil.

Is there anything this man can’t do? What’s next, a run at The Presidency?