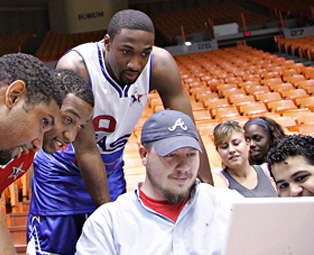 First, sorry I haven’t posted more today or yesterday. We’re pretty busy ’round here these days putting out our next issue of SLAM.

In between proofreading and scheming up hilarious headlines for stories, I’ve been thinking a lot about blogs the last few days. I have a blog. You probably have a blog. We all have blogs. Blogs are no longer cool or cutting edge — now they’re just there, a modern innovation we all take advantage of. I rarely read web pages anymore, now I probably read more blogs than anything else. I used to write a column on a website, but we switched everything here at SLAMonline over to blogging software just because it’s so much easier for everyone involved. AOL wanted themselves a piece of that blog advertising money so they went out and got a bunch of the best sports bloggers to write for them. Even ESPN is about to get into the blog game.

This is mostly a great thing. I love reading what everyone has to say, because you, our readers, are the people we’re trying to please here at SLAM. And now it’s easier than ever for us to converse with you and kind of get an idea of what the critical mass is talking about.

I’ve mostly been thinking about NBA blogs because there’s a ton of really good NBA stuff out there, and I want The Links and SLAMonline to stay good and new and fresh. I don’t know exactly how to do that, but that’s why I’ve been thinking about basketball blogs.

All of that got me thinking today about Gilbert Arenas, and I came to this conclusion: Gilbert is the internet’s first Blog-fueled superstar. In the past, Gilbert would have been the kind of player who came along and got his features in SLAM and then SI and then would’ve been mentioned in the notes sections of various newspapers as a quirky dude. But blogs have limitless space, and Gilbert continually fills those areas.

It’s almost like Gilbert came into his own during the perfect storm. Blogs went crazy, and the voluminous Wizards blogs were all there to cover it and cover it well. Dan Steinberg’s DC Sports Bog has feasted on Gil info for the last few months, as has the Wizards’ beat writer blogs at the Post. All the fan blogs, from Wizznutz to MVN to Gilbertology and on and on have been there, covering Gilbert like crazy. Gil has a wacky birthday party? Everyone’s there! Gil gets the altitude adjusted at his house? Blog it! even his “Agent Zero” nickname came from a blog. (Holler, Wizznutz.)

The point of all of this? I’m wondering how much of Gilbert’s forthcoming All-Star appearance is directly related to the blog explosion and Gilbert’s starring role within the blogosphere. We put Gilbert on a SLAM cover six months ago and it didn’t make much of a splash. Now, just over 100 days later, Gilbert’s voted a starter on the NBA All-Star Team? The general public has taken note of Gilbert, fast, and I’m not sure that would’ve happened six months back. Heck, a year ago the coaches didn’t even put him on the team.

Agree? Disagree? Does this post make any sense? Well, it does in my head. Anyway, back to work…