Gilbert OUT, Bosh IN 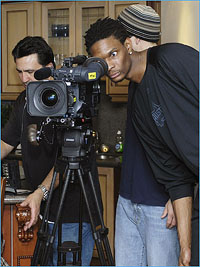 It’s a cold bottom line world, and NBA.com is no exception. Gilbert Arenas was their star blogger all season long. The thoughts that floated in and out of his head were as much of a must read for an NBA fan as anything out there.

Well, now he won’t be on the court, and while he’s rehabbing and playing video games – maybe continuing to blog about his team and rehab, a new superstar is stepping up. Introducing Chris Bosh. Raptors games haven’t exactly been national TV regulars since he came into the league, but they will be soon enough once the playoff starts. From a personality standpoint, Chris is usually described as quiet and intelligent. He claims in this post that he’s not as quiet as everyone thinks he is, so he should have a lot to say. He also goes on to brag about how nerdy he is. Respect that man. And of course there’s the photo over there to the left. I think you’re supposed to keep that eye closed when using a camera.
Don’t expect stream of consciousness one sentence paragraphs about quieting doubters and little dabbles into schizophrenia. Maybe Chris’s blog will be so good that it will motivate Gilbert to come back next year and blog better than ever. Oh my God start the playoffs.