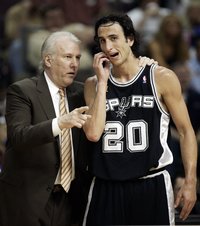 Manu Ginobili’s ankle was a very big problem for the San Antonio Spurs last season. To some, it may have even cost them a shot at playing in the NBA Finals. The ankle was an equally gnawing concern for Argentina during the Olympics, who had to play without the dynamic Manu in the Bronze Medal game (which they won.)

The person who had the biggest issue with the injury, though, was Manu’s full-time coach Gregg Popovich, who was famously unhappy with Ginobili’s decision to play in Beijing despite the bum wheel.

According to Manu Ginobili, however, Popovich took the fact that his veteran guard aggravated the injury pretty well. From the Rocky Mountain News:

“I talked to Pop, and he’s definitely fine,” Ginobili said. “He understands the whole situation. He understands the way I feel about all of this (playing for his country). I bet my (butt) that if Pop was a player, he’d have done the same thing. I’m totally sure about what I’ve done. I’m proud and I’m happy.”

Clearly, Manu did not talk to the same Popovich we all know and love. The Spurs might want to check and make sure that an impostor isn’t roaming the sidelines come November.