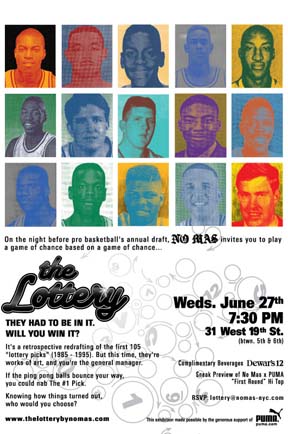 What do the names William Bedford, Shawn Bradley, Luc Longley, Chris Washburn and Randy White have in common? Or more star-crossed names like Len Bias, Bobby Hurley, Brian Williams (Bison Dele) and Jay Williams? They were “lottery picks” whose drafting teams did not exactly get what they were hoping for when they were chosen. When we’re caught up in mock-draft madness like we are now, and 15 guys in the Draft look like future stars (such as lotto successes like Jason Kidd and Shaquille O’Neal), it’s easy to forget that many of them will have no impact whatsoever on the NBA.

Things are just as chancy for the players. What if Kevin Garnett had gone somewhere other than Minnesota? Imagine a huge stage of your life—who and where your first full-time job will be—being decided by the whimsy of a ping-pong ball?

My man Chris Isenberg at No Mas—a New York-based art, apparel (many of you may be familiar with their t-shirts) and media company—realizes the uniqueness of the NBA’s Draft Lottery set up, and that’s why he has organized The Lottery, an art show of sorts that he is hosting in NYC next Wednesday night, the eve of the Draft.

“The whole thing was motivated by how weird this lottery system is,” Isenberg told me Tuesday (which was, as he noted, the 21st anniversary of Bias’ death). “How ancient and weird a way to determine where players will go. These are players’ lives being determined by that ball. The mission of No Mas is to explore something, and that’s what we’re doing with this event.”

As Isenberg’s friend, the writer Jeff Lane (author of Under the Boards, which is reviewed in the current SLAM) writes in an essay that will be posted on the No Mas site in advance of the event, later this week, “During the NBA draft’s lottery round, lofty expectations levied upon nineteen- and twenty-year-old shoulders and job-threatening pressure for team execs collide with the pure, ingenuous joy of a hoop dream realized in a single, world-broadcast moment.”

While replicating the players’ experience would be pretty tough, the No Mas event will allow attendees to get a small taste of what life is like for General Managers at the Draft and lottery, not to mention show off some extremely dope 8×10 paintings. Basically, 105 of the guests at the No Mas event will head home with a painting (one of each lottery pick from 1985-95, the first 10 years the system was in place.)

The details are a little too complicated to explain here, but check the flyer posted on the left side of this page and stay tuned to this website for more on the event. As Isenberg said, “the big selling point is that we are giving all these portraits away in the one time only lottery and draft. And I really want to get some basketball heads in the building.”

So, if you’re in New York, check it out. And even if you’re not, or you are but you can’t make it to The Lottery, this thing is worth following as a slight reality check in these days of lofty dreams.