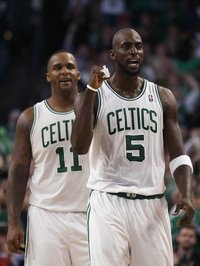 KG and Big Baby had a fascinating, at times contentious relationship during their time together in Boston. And as far as Glen Davis is concerned, he’s happy that he no longer has to deal with being Kevin Garnett’s backup.

With the trade to the Orlando Magic, Davis finally got his wish to become a starter on an NBA team, and promises to showcase talents that he felt were stifled by the Celtics.

It often works the other way around. When a player joins the tradition-laden Boston Celtics, it elicits giddiness. But not for Glen Davis. He was happy to be leaving the Celtics. “I was really excited,” Davis said of hearing the news earlier this month that a sign-and-trade had been worked out for him to head to Orlando. “It’s a great opportunity.”

“Big Baby” played four seasons with Boston, winning a championship and almost getting a second one before the Celtics faltered in a Game 7 loss to the Lakers in the 2010 NBA Finals. But Davis was tired of being a reserve at power forward behind eventual Hall of Famer Kevin Garnett, and sought to move on when he became a free agent. “My whole career, I was playing behind KG, and I don’t think people really were able to see what I can do,” Davis said. “The times that I didn’t have to play behind KG, I did a great job. Now, I’m (with the Magic), and I have an opportunity to be a starter, and I’m just embracing the moment.”

As happy as Davis may be about his new arrangement, it will be interesting to see how he fits in Stan Van Gundy’s system, and how he adjusts to a potentially even bigger role should Dwight Howard get traded this season.

I can’t wait until the first regular season game between Boston and Orlando, when Davis and Garnett will hopefully guard one another.