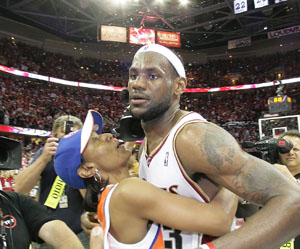 I didn’t know what Ms. Gloria James looked like from behind, through a television screen, so when I saw LeBron mouth “Sit yo’ a$$ down!” I just laughed and clapped my hands. I thought Bron had just forcefully dismissed some crazed broad that happened to get baseline seats, maybe had a few too many apple martinis and thought it was within her rights to forearm KG and get yappy with Pierce. But then I realized it was Ms. James and it sent me reeling a bit. It was like: “Dog, Bron…you can’t talk to Moms like that! I mean, she was treating you like a child and being intrusive and overprotective, making you out to look like a square or — sorry — a punk…but fix your face and mouth when addressing Moms, homey.”

Now, granted, in a fictional world, if my mother was at the back of a press conference and — during a heated exchange between a coach and I — yelled, “Don’t you talk to my son like that!”…well, let’s just say that she’d get a glare and some forceful words encouraging her not to utter another word. And I hope, in the heat and tension of that moment that I’d do so semi-respectfully, but I can pretty much guarantee that she wouldn’t get a “Shut yo’ a$$ up!” And, trust me, I’m no Theodore “Beaver” Cleaver.

Once I processed that somewhat surreal moment between Bron and Moms, the first thing that popped in my head was the dynamic between mothers and sons in black single-parent families. To me, LeBron telling Moms to sit her a$$ down was a “single Mom thing.” Ms. James had Bron when she was 15. I’m guessing, in his mind and hers too, he is and has been the man of the house for quite some time. Of course, this may not be the case at all, but I’ve witnessed that dynamic with too many relatives, friends and neighbors. I haven’t had much extended contact with white single-parent households, but I can tell you that a hallmark of this generation’s (Gen X and Y) mother-son dynamic in black single-parent homes is for the mothers to treat their sons — specifically the eldest son or only-son — similar to the way they’d interact with and treat a husband. It is both endearing and alarming. I’ve experienced countless situations where grown women defer to and take direction from teenage sons, sometimes younger.

You ever watched “Comic View” on BET? I hope not. But if you have, you’re familiar with how the low-brow and unfunny black comedians like to riff on how disrespectful white children are to their white parents and how black parents would never go for that from their black children. There’s some truth to that. I can’t recall a black peer telling their mother or father to “F&%$ off!” or a black toddler telling their mother to shut up or get out of my face (in a grocery store), as the unfunny black comedians like to constantly reiterate. But there’s something just as riveting and peculiar about a 14-year-old boy barking an instruction at his Moms and the mother demurring. Bron’s Sit Yo’ A$$ Down moment was one of those instances.

And here’s the thing: I suspect — right or wrong — that Bron probably wouldn’t have said what he said if he grew up with a Pops — for a few reasons…

2.) Even still, LeBron would not tell his father’s wife to sit her a$$ down, especially not with Mr. James standing there.

and 3.) There probably wouldn’t be much precedent in their relationship to imbue Bron with the type of authority to carry on that type of exchange.

Let me be clear about something — I’m 99.99999% sure that LeBron is an infinitely better son than I am. Most sons from single parent homes are incredibly loving, protective and fond of their mothers, grateful for the sacrifices made in their behalf and — as is clearly the case in Bron’s situation — the commendable job they did raising a son. That’s why Morris Peterson claimed in a taped Mother’s Day video, “We all a bunch of Momma’s Boys in this league.”

It should also be noted that when LeBron revealed the impetus for his emotional words, they came from a seat of love and protection, as opposed to irritation and exhaustion. He did say — in a slightly tickled, yet somewhat exasperated tone — that he knows his Mom, as in, “I gotta watch Moms.” But he also explained that he was concerned that Ms. James contact and interaction with KG could have put her at risk of getting banned from NBA games and, as Bron put it, “I can’t afford for my Mom not to be at every one of my games.” A comment like that could make a sap misty-eyed.

All this rambling is not make a mountain out of a molehill, but perhaps one of the great social characteristics of the NBA is the fact that such a great number of its players come from the single-parent-homes, an American issue that sociologists and government officials still view (rightfully) as a concern. Dudes need their Pops. (Randomly: I found it interesting that OJ Mayo, the product of a single Mom, highlighted Rodney Guillory’s role as a black male role model in his statement responding to ESPN’s report.)

That one instance in the second quarter of Game 4 actually shed a lot of light on who these dudes are and how/why they are the way they are.
Vincent Thomas is a SLAMOnline columnist and SLAM Magazine contributor. He can be reached at [email protected]