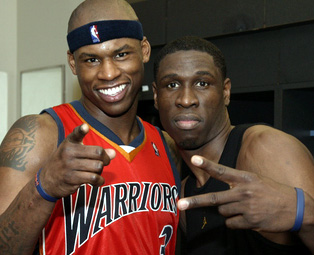 On many occasions I have said I would never write a blog post because I do not write for free. That may sound selfish to some and idiotic to the more self-righteous, but I’m from East Oakland, California—hustling is in my blood and working for free is not hustling.

But today I am contradicting myself (not the first time and certainly won’t be the last) as I write my first post. I have a good reason to eat my words, 12 years worth of reasons:

Last night, the basketball team that I have been rooting for my entire life ended the second-longest Playoff drought in NBA history.

That’s right people. The Golden State (should be named Oakland, but I digress) Warriors are in the NBA Playoffs and once again it’s on. To commemorate this occasion I am in the XXL offices today rocking my Mitchell & Ness Latrell Sprewell home jersey with a fitted to match. I’m so excited I feel like a little kid on Christmas Eve.

It’s not like I didn’t believe we (yes I said we, after all this time and money I’ve invested in the franchise, I feel like I’m part of the family—Mully cut a brotha a check) couldn’t make the Playoffs this year, it’s just that the reality of doing it is so sweet.

When Don Nelson was hired as the coach, I bitched and moaned to Khalid and Ryan, because as far as I’m concerned, Nellie’s infighting with Webber and the beef he let go on between Tim “No Amaechi” Hardaway and the younger guys on the team created the losing state that the franchise was mired in. But for the 2006-2007 Playoffs, all is forgiven.

Moving forward, call it bias, call it lifelong fandom, call it whatever you like, but I wholeheartedly believe that the Warriors will defeat the Mavs in the first round (a first round that’s way too long if you ask me—bring the 5-game series back!). Dirk is head and shoulders above any player on the Warriors roster and that’s pretty much where the Dallas advantages stop in my eyes. Starting five for starting five, GS matches up pretty well with the Mavericks or any other team in the West besides the Spurs. Dallas has no answer for B-Diddy or J-Rich (especially if he’s hot, which he has been for the last couple of weeks).

Everyone is harping on Golden State’s regular season sweep of Dallas, which means both nothing and a lot. The Mavericks are soft, as exhibited last year in the Finals, and it wouldn’t surprise me if the dominance GS has had over them the last two years rattles them just a bit. On the flip side, there are hella examples of NBA squads getting whooped in the regular season by a particular team only to annihilate said team in the Playoffs. So who knows if it will have an effect?

Avery Johnson will have a great game plan, Dirk will get his 35, Howard will fill up the stat sheet but, Jason “I really wish I was from the Bay” Terry, Devin Harris, old man Finley and old man Stackhouse don’t want to see the Warriors offense. On another note, who knows Dirk’s strengths and weaknesses better than Nellie? If it wasn’t for the old coach, Dirk would probably still be pulling splinters out of his butt in Milwaukee.

As my homie V-Dub told me the other night, the Warriors are like a street version of the Suns. I could not have said it better myself. Showtime has officially moved up north, I said it and you see it.

Branden is the Lifestyle Editor at XXL Magazine.