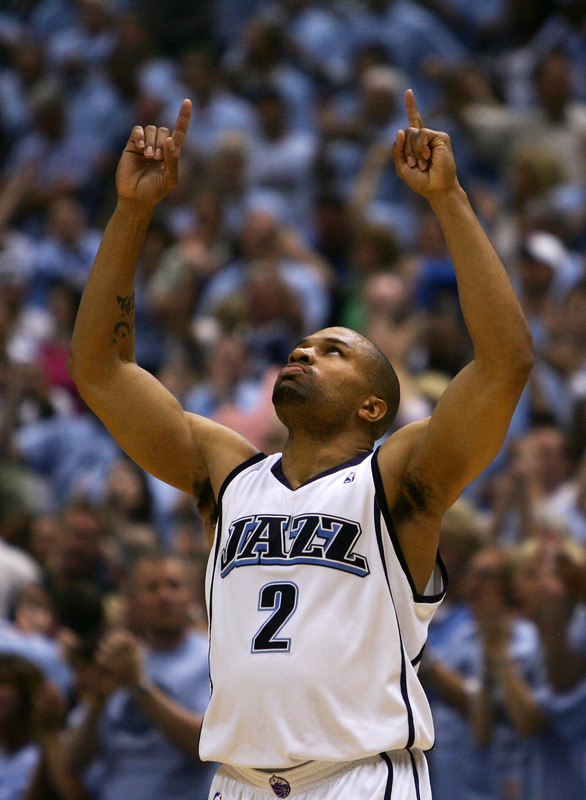 -There are two great injustices at play in this series: 1)Don Nelson can no longer drink cheap domestic beer during the post-game press conference. 2)Dick Stockton and Reggie Miller are calling the games. I will not stand for this!

-NBA TV ran a regular season Jazz-Warriors game from the mid-90s before tonight’s game 2. Mugsy Bogues (!) was running the point for the Dubs, and Mailman had himself 56 points (37 in the second half; 25 in the third quarter alone), and threw in the game winning bucket for good measure. Not a bad night at the office.

-Before the game, I predicted that Baron would have himself a monster night after getting outplayed by Deron in game 1, and that’s exactly what happened. Of course, I also predicted that the Jazz would continue pushing the pace, which did not really happen. Can’t win ’em all, I guess.

-Dee Brown, meet the starting lineup (and sadly, the chilling list in all likelihood). Gordon Giricek, say hello to the bench. Funny how one game can change things in the Playoffs. After playing terrible defense in the series opener (and getting glued to the bench as a result), I bet that Giricek hasn’t worked up the guts to look his coach in the eye for the last couple of days.

(As for Dee: stay up, homie. That fall did look pretty bad.)

-I have a sneaking suspicion that TNT is deliberately trying to alienate its viewers. Not only do they insist on letting Reggie Miller and Dick Stockton’s rotting corpse call Playoff games, but now they’ve dusted off Magic Johnson (who hasn’t put together a coherent sentence in about 15 years) for Inside The NBA. Thank God they’re bringing in Shaq for a night in the studio next week. For a moment, I was starting to get worried.

(Also, can you believe that Charles Barkley is only now going to get himself an email address? That’s insane. Welcome to the future, Chuck.)

-Kirilenko’s block party was simply stunning. My favorite of the six stuffs was the one on Baron Davis in the fourth quarter. After B-Diddy made the Russian dance with a few nifty crossovers, AK-47 laid back in the cut and let Baron play himself into thinking he had an easy layup attempt. THWACK! Get that playground nonsense outta here, Baron. This is the Playoffs, baby!

(And yes, I wrote the last two sentences with Terry Tate’s voice in my head. Thanks for asking.)

-When Derek Fisher made his dramatic entrance into the game, the goosebumps on my arms got goosebumps of their own. Great moment. You can read about why he missed the series opener here.

(Message for the Jazz employee who stuck his crotch in front of the camera so that we didn’t see any more of D-Fish riding the stationary bike in the tunnel: Don’t you ever do that again. Thanks, mate.)

-Reggie Miller’s mini-rant about the refs getting a call wrong seconds before being proven wrong himself by the replay may have been my favorite moment of the year. You know what, screw it, let him call every game. His entertainment value at this point is incalculable.

-Can Jason Richardson get some love already? Dude has been playing out of his mind in the postseason. I see you, J-Rich.

-Deron Williams has balls so big they would make Sam Cassell blush. How about Sloan trusting the second-year point to take one of the biggest shots of the season? Luckily for Williams, Matt Barnes decided that he was suddenly allergic to defense as he nearly jumped out of Deron’s way on the game’s OT-forcing jumper.

(I love Jerry Sloan’s decision to put Derek Fisher on Baron Davis late in the game. Remember, this led to a Davis turnover which could’ve resulted in a tie game had Okur connected from deep on the ensuing possession. That’s coaching, folks.)

-As this wildly entertaining game went into overtime, I began to think about how boring these Playoffs would have been had Golden State not been involved: The Suns dispatched the Lakers in 5 relatively easy games; Cleveland swept Washington in a laugher of a series; the Spurs are busy doing that thing where they make you want to take your own life when you watch them play; Detroit has yet to be challenged; and even the Bulls’s defeat of Miami lacked drama.

(Thanks for the excitement, Golden State Warriors. Even more importantly, thanks for making that stupid trade, Larry Bird! You truly are a man of vision.)

-Like any good Hollywood script, Derek Fisher hit the dagger with a baseline three late in overtime to give Utah a 2-0 series lead. Looking back on things, the Warriors might as well have hopped on a plane back to Oakland as soon as Fish entered the game.

-I still like Golden State’s chances in the series. I fully expect them to tie it up in Oakland in front of those yellow-clad crazies. You must remember that they could have very easily won the first two games in Utah. They fell apart (in their execution, and at the free throw line) at crunch time in both games. Warriors fans have a big job ahead of them in games 3 and 4. The fans (and their team) cannot afford to disappoint.