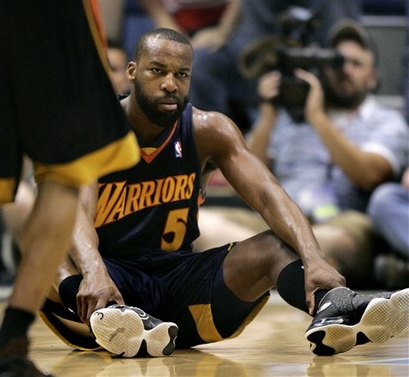 -The Warriors — a team that lives and dies by the three — shot a woeful 20% from the land of beyond. Yet, they were still very much in the thick of things with about 4 minutes to go.

-Derek Fisher shot 70% from the field, including 4-5 from the three point line. Now, Derek Fisher is a very good player with plenty of Playoff experience, but who seriously thought he would end up being the series MVP? No one, that’s who.

-None of the Warriors were ejected in this game. I thought that was their thing whenever they lose a Playoff game. Stephen Jackson did everything but physically assault someone to get himself kicked out of the game, but the refs gave him a very long leash.

-Deron Williams finally played like the second-year player that he is. He crapped all over himself to the tune of 1 for 11 shooting, and was in foul trouble all game long. Deron, prepare to be punished in cruel and unusual fashion by Tony Parker.

-GSW kept the game close by playing an unfamiliar style of basketball: They couldn’t rely on the three (mostly because they could barely make any), so they focused on rebounding, and created turnovers (25 of them) thanks to an aggressive, trapping defense.

In the end, Utah proved itself to be the superior team. They were deeper; they could adjust their style of play depending on what Golden State threw at them; they dominated the boards all series long; and as Doug Collins pointed out, they won all of the close games.

Golden State’s elimination shouldn’t come as a surprise to anyone. A team with no real inside presence, and whose offensive philosophy seemingly revolves around the idea of launching as soon as they cross the halfcourt line, can’t be expected to achieve continued success in the Playoffs. It was fun as hell to watch while it lasted, though.

Now, in all likelihood, we’ll have the Utah Jazz and San Antonio Spurs in the Western Conference Finals. Boozer vs. Duncan! Bowen vs. Harpring! Kirilenko vs. Finley! Who can smile less: Popovich or Sloan?

Who am I kidding? I probably won’t be tuning in to that series until game 5. At the very earliest.