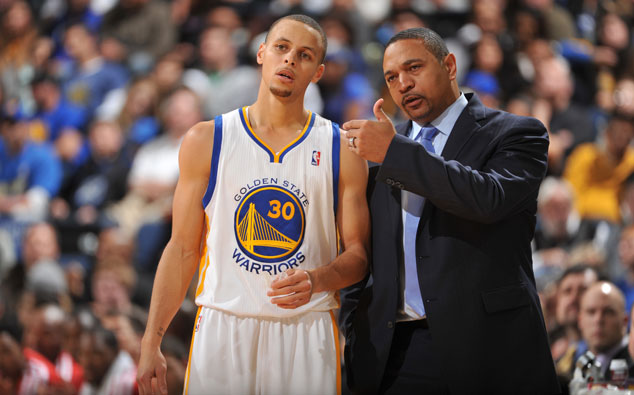 There’s a 14-story hotel in West Hollywood where Jim Morrison, singer of The Doors, once climbed over the balcony of his top floor suite and hung from the railing by his fingers. “I wanted to know what it was like to be on the edge,” Morrison explained as he was being kicked out of the hotel. So I was told by a night manager when I stayed there a few years ago.

On some level the Golden State Warriors probably understand where Morrison was coming from. This team likes to be on the edge, too.

Throughout the season the Warriors have played a very dangerous game: They’ll post a string of impressive, determined wins, rocket up the standings, and then come out flat for a couple weeks, nearly long enough to push them out of contention. But just when it seems they’re about to fall off the edge altogether, the Warriors, one of the more talented young teams in the NBA, climb back on to the balcony, play well for a while, and then the cycle starts again.

“We’re trying to learn how to be a good team,” explained Jermaine O’Neal, the elder statesman of the Warriors’ locker room. “It’s a very happy-go-lucky team and sometimes that’s a problem. It’s ‘OK, we’ll get it next game,’ but the premiere teams say, ‘No, we’re going to get it tonight.’ I told the guys after that last game that we don’t want to look back and say, ‘Remember those games we should have won, games that would have put us in a better position?’”

That last game, a loss in which the Warriors managed only 75 points vs talent-strapped Charlotte Bobcats, capped three weeks of anemic play which saw them lose all the momentum they’d gained on the 10-game win streak that preceded it. The Warriors won only when gifted with opponents who were tired (the Blazers had played five games in seven days), injured (the Clippers minus CP3), or flat-out awful (the Jazz). During the loss to the Bobcats, a frustrated Oracle Arena crowd—that even on average nights is deafening in its support—decided it had had enough and booed the Warriors off the floor.

Two nights later on Thursday, the team finally broke out of its slump, but only after falling behind 16 points to the Bulls. The Warriors were missing David Lee and Andrew Bogut, but the Bulls, already depleted by the losses of Derrick Rose and Luol Deng, were also without leading scorer Carlos Boozer, scratched due to injury. Just as it looked as though the game was slipping away from the Warriors, and a sullen crowd wondered if the season was too, Stephen Curry went into Human Torch mode, scoring 16 points in a furious second quarter rally that defibrillated the team’s heart.

Afterward, coach Mark Jackson tried to put the Warriors’ inconsistency into perspective. “We’ve got to learn how to handle success better,” he said.

O’Neal fears the Warriors may be too inexperienced to know how hard it is to shift into a higher gear once the Playoffs begin, and too young to realize how rare it is to have a chance to go deep in the Playoffs.

“Nothing is guaranteed,” says O’Neal, who has made it as far as the Conference Finals only twice in his 18-year career. “We think because we’re young we’ll have many opportunities, but that’s not the case…our time is now.”

Unless they gain the sense of urgency Jackson and O’Neal are asking for, the Warriors will keep climbing over the railing. And sooner or later, a more disciplined team will push them off.