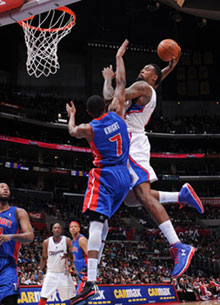 Unfortunately, the one time the public got to see Brandon Knight up close and personal on TV this year, he was on the receiving end of this season’s most electrifying dunk.

With the Pistons on the verge of missing the Playoffs for the fourth straight season, the squad doesn’t command a lot of national television coverage. Knight, the eighth pick in 2011, is putting together a solid sophomore campaign after making the All-Rookie First-Team last season. While the 21-year-old point guard is still carving out his niche on the team, a few moments have provided a glimpse into a certain competitive fire that carries him.

First it’s the 2013 Rising Stars Challenge, and sophomore Kyrie Irving is putting on a show. Irving, named MVP of the Challenge in 2012, is eliciting gasps with a display of crafty ball handling and isolation buckets. All of a sudden, Knight makes it a little game of one-on-one, going against the first-time All-Star on both ends of the floor. Irving gets the best of the matchup, but both put on a good show.

Fast forward, and it’s March 10, when the Pistons are facing the Clippers in Los Angeles. The Clippers, in full running mode, unleashes a barrage of fastbreak sequences on the Pistons. During one fateful play, Chris Paul throws a perfect lob to DeAndre Jordan, who catches it seemingly in slow motion, and slams it over the overmatched Knight, who had tried to defend the play.

On showing a little of his competitive nature against Irving and Jordan, Knight says, “I’m going to compete. No matter whether it’s an All-Star game or jumping against a 7-footer—probably the most explosive big in the NBA—where I’m from and where I was raised and the way I play basketball, it’s just instinctual. No matter who I’m going up against, I don’t really care who it is, I’m just trying to help my team win.”

While Knight’s name was used in many a catchphrase, and the dunk replayed endlessly across media outlets, many criticized the guard for making a play he couldn’t win. Was he surprised at all the backlash?

“No, I wasn’t surprised just because that’s our society today. Our society today is scared of confrontation. If they’re put in a situation where they possibly might look bad, [people] are not wanting to do that. But me, I look at the positive of every situation. I could’ve blocked it. So that’s how I looked at it when I jumped.

“Wrong place, wrong time,” Knight continues. “But like I said, I make the best out of every situation. Even with that, a lot of positive has come out of it. A lot of people understand how tough I play, and like I said, I’m gonna take everything as a positive. My teammates see how hard I play, how passionate I am, so it’s all working out.”

On a Pistons team that is trying to build into a contender, they get a glimpse—amidst the scrutiny—of the heart that drives their young point guard. On his adjustments since last season, Knight says, “I think I’ve improved, but just trying to figure out what I need to do to just help my team win, each and every game, it could be different things.”

On the team’s future, he says, “We definitely have a good foundation and we’ll continue to improve. We got a lot of guys that work hard and I think that’s the most important thing.”

Besides a competitive drive, the one thing we learned about Knight is that he has a sense of humor. The night of the dunk, Knight tweeted, “It wasn’t in the scouting reports that the clippers threw lobs lol.”

“Gotta laugh about stuff like that,” he says, “If you play hard, leave it on the line, stuff like that’s gonna happen and you can just sit back and laugh about it. If I wouldn’t have jumped, I probably would’ve been mad at myself.”