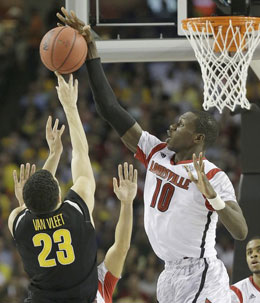 We’ll own up to it: Allowing Omer Asik to sign in Houston wasn’t the best decision this front office ever made.

His presence was sorely missing inside this season. Our worst lineup featured Taj Gibson at center during the regular season. We brought in Nazr Mohammed to spell Joakim Noah and fill in whenever his plantar fasciitis flared up. Mohammed kept himself ready to play and performed his role relatively well. But he’ll be 36 next season, and he’s no long-term solution to this team.

Gibson—let’s make it clear right now—can function as a center at times, but under no circumstances can he spend significant time there.

Our preference is to draft a center who can contribute on the defensive end right now. A proven winner, great character guy, team-first, very active. It must be fate that this guy is still around.

With the 20th pick in the 2013 SLAMonline Mock Draft, the Chicago Bulls select…

As the defensive anchor of a National Championship team and the Big East’s Defensive Player of the Year, Dieng is a tremendous team defender who would fit perfectly with the Bulls.

His journey to the Draft is remarkable. After taking home MVP honors in the 2009 Basketball Without Borders event in South Africa, Dieng made the move to America to play his senior year of high school at the vaunted Huntington Prep before committing to Louisville.

His improvement was dramatic through his three seasons with the Cardinal, and you know the ending: The Senegal-born center went on to quarterback Rick Pitino’s elite matchup zone to the National Title, averaging 9.8 points, 9.4 rebounds and 2.5 blocks on 53.4 percent shooting.

At 6-11 with a 7-4 wingspan, Dieng has the prototypical length to be an above-the-rim presence who will alter and block shots in the League. He has great timing as a weakside shot blocker, guards the pick-and-roll to perfection and can switch on to smaller players. His defensive awareness and anticipation off the ball resulted in 1.7 steals per 40—third among Draft-eligible centers.

His offensive game is far from complete, but he’s developed a consistent jumper out to 15 feet. He also has very good court vision and instincts as a passer. In the Big East championship game, racked up 8 assists against Syracuse’s vaunted 2-3 zone.

At just 230 pounds, he could still use more strength to keep NBA bigs off the boards, and he’s clearly still raw offensively, especially on the block.

He’s one of the oldest players in the Draft at 23, and questions will certainly arise about how much potential is left untapped. But there’s no reason to believe that he’s neared his peak. He’s a high character player who’s willing to learn and take his game to the next level. He and Gibson would make for a monster pairing off the bench.

Dieng might be a rotation player in the NBA, but he has the ability to be a lockdown defender right away and can do what a team needs him to do offensively. And that’s all the Bulls need.