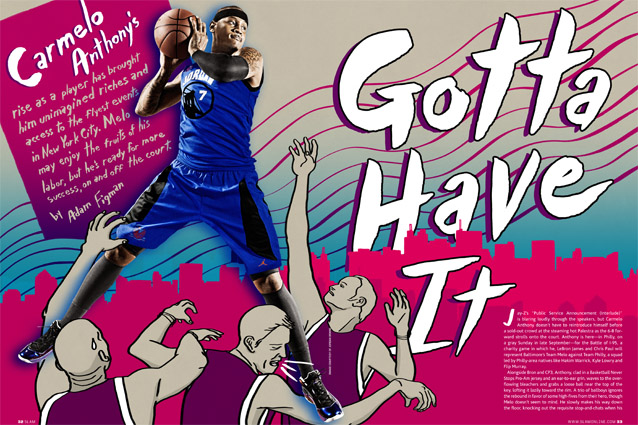 Jay-Z’s “Public Service Announcement (Interlude)” is blaring loudly through the arena’s speakers, but Carmelo Anthony doesn’t have to reintroduce himself before a sold-out crowd at the steaming hot Palestra as the 6-8 forward strolls onto the court. Anthony is here—in Philadelphia, on a gray Sunday in late September—for the Battle of I-95, a charity game in which he, LeBron James and Chris Paul will represent Baltimore’s Team Melo against Team Philly, a squad led by PA-raised hoopers like Hakim Warrick, Kyle Lowry and Flip Murray.

Alongside Bron and CP3, Anthony, clad in a Basketball Never Stops Pro-Am jersey and an ear-to-ear grin, waves to the overflowing bleachers and grabs a loose ball near the top of the key, lofting it lazily toward the rim. A trio of ballboys ignores the rebound in favor of some high-fives from their hero, though Melo doesn’t seem to mind. He slowly makes his way down the floor, knocking out the requisite stop-and-chats when suddenly his 4-year-old son Kiyan storms the court and finds his father’s arms. After mumbling a sentence or three into the child’s ear, Anthony puts him down, a smile remaining on both of their faces as Kiyan dashes back to his mother, the former La La Vazquez, who waits on the sideline.

Sure, Team Melo would go on to lose pretty embarrassingly to its competition in the ensuing two hours, but Carmelo Anthony has plenty to be happy about these days. He’s been the New York Knicks’ biggest face since a trade brought him to the Big Apple last February, and though his overmatched and over-injured squad was swept by the Boston Celtics in the first round of 2011’s Playoffs, an appearance in the postseason alone was enough to appease the Knicks’ restless fan base for the time being. He spent the past summer recovering from surgeries on his knee and elbow that neither he nor the Knicks had announced at the time, and working on his game, breaking to do things like visit China on the Jordan Flight Tour, hit Lincoln Center to take in Fashion Week, attend Nas’ 38th birthday party and appear on an episode of Law and Order: SVU. Yeah, he’s a full-fledged celebrity now.

Of course, Melo also found time to represent BMore—where he moved from Brooklyn at age 8—in a couple of streetball games, including this one, in Philly. Not the worst way to spend a few locked-out months. SLAM caught up with Melo the week prior to the charity game to talk about the offseason, NYC, his off-the-court hobbies and just how much he’s changed over the past decade. Spoiler alert: A lot.

SLAM: You’ve been suiting up for the Melo League this summer, even recruiting some of your friends. What made you want to get involved?

SLAM: The AND 1 Mixtape days.

CA: Yeah. I haven’t seen it like this in a long time. So I have a league at my gym [in Baltimore] every year. And then guys were just running around playing. Durant started playing, then Kobe played in the Drew League, LeBron played in the Drew League, and then there was some trash talk, and that’s how it started. But my game [Melo vs Goodman] was supposed to be the championship game for my league. So I was like, this is the one time that I’m gonna play. Why not ask people to play?

SLAM: Any lockout plans yet? Are you looking at offers overseas?

CA: Nah, I haven’t even started thinking about that yet. I really haven’t.

SLAM: Many are predicting that the entire season, or at least a huge portion of it, could be missed. What are the players saying?

CA: We always gotta think positively. I hope we get this done. You gotta prepare for the worst, anyway.

SLAM: Do you think it hurts the Knicks a little extra? You and Amar’e are both in or around your primes, and Chauncey Billups is a vet who doesn’t have too many years left. You guys really need to get on the court, right?

CA: Of course, but I don’t think the lockout affects anything. If anything, it helps, to be honest with you. Guys get to work out a little bit more. It helps guys get healthy and deal with the little things. Amar’e’s 28, I’m 27—we’ve got a lot more years to go.

SLAM: Do you feel like you’ve hit your prime yet?

CA: Nah, I feel like I haven’t even reached it. I’m not even there yet.

SLAM: What jumps out to you as what you need to improve on? When you watch film of yourself, does anything stand out?

CA: Conditioning. At the end of the day, it’s how conditioned you are. When you’re well conditioned, a lot of things fall into place for you. So that’s one of the things that you’re always working on, and you go back and you watch film and a lot of things are different. But for me, I’m just making sure I’m working out as hard as I can until they lift that lockout.

SLAM: Were you prepared for the growing pains that were bound to hit when you joined the Knicks?

CA: Well, we lost eight games, or something like that. [But] once we get together, and we have that full year and we get a training camp and we start getting input from the guys like myself on what we need to do, what direction we need to go and just getting everyone on the same page, a lot of stuff becomes easy. I don’t wanna say “easy,” but as far as game flows and how things work and getting used to people’s rituals and what they do on a daily basis, a lot of that stuff helps. The outsiders looking in don’t really understand that stuff.

SLAM: During the Playoffs, it often looked like it was Carmelo against the world. Is that how it felt?

SLAM: I’ve spoken to Amar’e about what playing in New York allows you to do, and…

CA: Yeah, doors open, opportunities are right there. Not just for athletes, but for anybody that comes to New York. The energy is amazing here, regardless if you’re a doctor or fireman or athlete or singer. It doesn’t matter, there’s always opportunities.

SLAM: What off-the-court project that you’ve been involved with are you most proud of?

CA: My production company: Krossover Productions. After coming off a stellar documentary—we did the Tyson documentary—I’m getting my feet wet with the film industry and going through scripts and having multiple scripts and figuring out the right projects to do. I really enjoy doing that. With my time off, if I’m not in the gym working out, I’m in my office going through scripts and doing conference calls and stuff like that. I like to be hands on.

SLAM: Let’s talk a little about the new sneakers. What differentiates the Melo M8s from the previous versions?

CA: Well, we went lighter. It’s a lighter shoe than I’ve done so far. Last year was light, but this one, it’s real light; it won’t even feel like it’s on your foot. We use a different technology on there—the Flywire—with the padding, and we filled it out with some different materials.

SLAM: Did you have a big part in the design?

CA: Yeah, I was in there from day one, when it comes to the design. From the idea of which way we should go, the inspiration at the time, whether it’s a car, whether it’s clothes, whatever it may be, that’s  the first meeting that we always have. We go from there. We took  it a little left field with this one. Most important, this is my first  New York edition shoe, so it adds that much more meaning to it. New Yorkers didn’t have a sneaker that they could look forward to since Pat Ewing’s.

SLAM: You were first profiled in SLAM almost a decade ago. How different is that kid we wrote about 10 years ago compared to the guy I’m speaking with right now?

CA: It’s completely different—it’s a 180-degree turn. Just as far as where my mindset was at, where my mind is at, the things that I’m looking forward to in life and [trying] my brand and myself. You gotta think, I was 17, 18 back then, so [now] it’s nine, 10 years later. So I think I’m still the same person as far as how I am and how I treat people and what I stand for and what I represent and where I came from—that’s never gonna change. That’s instilled in my blood. As far as my maturity, my mindset, I’m on a totally different planet right now. Some things just don’t matter to me anymore.

SLAM: How has marriage changed your perspective on everything?

CA: Marriage makes you more of a man. More responsibility. You gotta keep a clear head on your shoulders and keep a clear mind. And my son is 4 years old, so he’s trying to listen to the music I listen to, watch the movies I watch, play the video games that I play [laughs]. It’s good to see that.

SLAM: I would guess it’d make you take your career more seriously, keep you focused.

SLAM: Playing in New York, you’re not allowed to turn that off.

SLAM: I saw pictures of you at Nas’ birthday party with Jay-Z and a bunch of others. Looked like an amazing night.

CA: Yeah, something like that, it goes way beyond just being out and having a good time with Jay and Nas. It goes way beyond that. I’m a Nas fan. I walk up to people and they say, “You remind me of Nas!” And that’s a good feeling. To be in the room with Nas and Jay-Z and AZ and DJ Premier, this is it. This is the room to be in. This is classic. This is hip-hop. This is the culture. I was probably more excited to be in that room than they were. [Or] just as excited as they were.

SLAM: Is it crazy for you to think that all of this came from being really good at basketball?

CA: I always reflect back on that. I always think I’m blessed for that. Mostly all of this came from me working hard, and I’m gonna continue to work hard to get what I want—that’s where all of this is coming from. Just hard work and persistence. Doing what I gotta do.