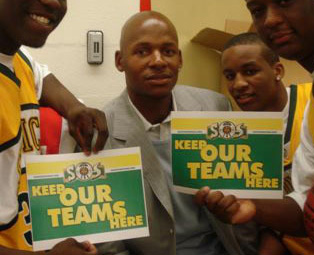 Two contemptible men named Clay Bennett and Aubrey McClendon — who in their spare time spend millions of dollars sponsoring anti-Gay referendums — have moved the Seattle SuperSonics and their 40 years of NBA history to Oklahoma City. As hearts shattered in Seattle, Bennett — who made his money the old fashioned way, by marrying it — grinned like a very sated canary in front of a podium with the NBA logo emblazoned with the letters OKC and said, “We made it. The NBA will be in Oklahoma City next season.” There is no “we” here unless Bennett is talking directly to McClendon. It’s a shame these two ghouls are so adamantly against gay marriage. They deserve each other.

After a six-day federal trial, U.S. District Court Judge Marsha Pechman announced that the city had settled with the two Oklahoma corporate raiders for the paltry sum of $75 million, with only $45 million guaranteed. Bennett and McClendon now get to legally steal the team and all Seattle gets back is the right to the name SuperSonics along with the team colors. It’s like losing your house and getting to keep the doorknobs.

Bennett said, with a look on his face about as sincere as George W. Bush at a military funeral, “It was a tough experience for all of us that were involved in it. There was just so much that happened on both sides, so much misinterpreted, miscommunicated and misunderstood that it was difficult.” (Miscommunicated is not a word.)

But Bennett and McClendon haven’t expelled their gob of spit at the sacred hoops of Seattle without help. They can thank the man pulling the strings, a person to whom fans have become little more than scenery for those in the luxury boxes: Commissioner David Stern.

There has been nothing “miscommunicated” by David Stern about whether the Sonics will ever actually have humans to fill those uniforms. He issued the following statement: “We understand that city, county, and state officials are currently discussing a plan to substantially rebuild KeyArena for the sum of $300 million. If this funding were authorized, we believe KeyArena could properly be renovated into a facility that meets NBA standards relating to revenue generation, fan amenities, team facilities, and the like.”

In other words, if the taxpayers come up with 300 million dollars, then you get a team. This is insult on top of injury. Stern knows perfectly well that the Seattle legislature has spent the last year denying Bennett, McClendon and Stern this taxpayer money. Stern’s statement is little more than insult piled on injury. But even worse has been the reaction of Seattle Mayor Greg Nickels. Nickels did some crowing Wednesday, saying that the settlement would cover all the rent, tax revenue and debt on KeyArena “I believed all along enforcing our lease would allow us time to come to a better arrangement,” Nickels said. “We now have that deal.”

Some deal. The city gets its payout. Bennett and McClendon get to move their team to OKC. And the fans get slapped in the face. No one in the Washington state political class showed the courage to stand up to Stern and his cronies. They never pursued municpialization — a kind word for expropriation — and turning the team into a public utility. Far smarter than all the politicians who so badly bungled the negotiations and then buckled like a belt, was former Sonics star Ray Allen.

He said it perfectly six months ago: “When the team was bought from the previous ownership, they told us and everybody in the city that they sold it to a group that they thought would most likely keep the team in the city. Everybody thought that was some [garbage]. How is someone from Oklahoma City going to buy a team in Seattle who doesn’t have any ties [in Seattle] and has big money in Oklahoma? If things don’t go right, everybody’s craving for the team to move to Oklahoma City.”

Maybe Ray Allen should run for mayor of Seattle. It will be the closest the city gets to having a SuperSonic in the city limits.

Dave Zirin is a columnist for SLAM magazine and the first sports correspondent for the Nation Magazine. He is the author of “Welcome to the Terrordome” (Haymarket) and “A People’s History of Sports in the United States” (The New Press),
coming out this summer. Receive his column every week by emailing dave@edgeofsports.com.