Grant Hill is a Phoenix Sun 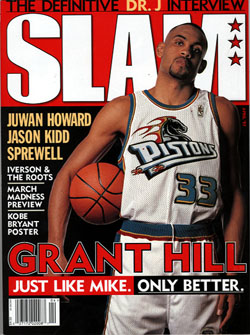 It started out as a rumor, but has become truth. Grant Hill is going to the Phoenix Suns. Phoenix gets the “I’m just trying to win a championship” discount. A no-lose situation, as he stands to make 1.8 mill with a player option for pretty much the same thing in year two. Not quite 7 years for $93 million, which was how much Orlando paid.

So, what do you all think? He’s obviously not in the same galaxy as the player that inspired the cover you see to the left. But hey, an affordable albeit injury plagued Grant Hill is better than nothing.