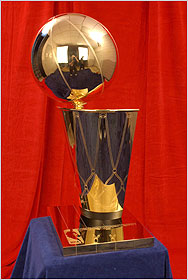 Before I get into the basketball portion of this post, I should mention that the New York Giants are flying high thanks to the latest Dip Set anthem. That means they are a team of destiny. BALLLLIIIIINNNNNGGGGGG!!!

Last night I was working my way through the intense ESPN the magazine NBA season predictions. Now, I enjoy a good preseason prediction as much as the next guy, but whether it’s SLAM, ESPN, Playboy, or whatever, they are pretty meaningless. (Keep reading ours though!) As soon as one key player gets hurt or there’s a trade or arrest, everything we thought we knew was a fact becomes an afterthought. It’s not about being right or wrong, it’s about being able to defend your argument.

For example, last year I thought Miami would be terrible defensively, the players would never allow Stan Van Jeremy to coach them and there would be a revolt among the vets that ripped the team apart. I hated the oily way that Pat Riley snaked his way to the bench, but that was the move that put them on top. Oh well, you never know. People figured that the Knicks would be better with their Hall of Fame coach, or at the very least they would experience growing pains and get better as the season wore on. No. Stromile Swift was going to be that banger to play alongside Yao and the Rockets were going to be one of the best in the West. That didn’t happen. Though T-Mac’s injury was the fun surprise that ruined their season.

My pick to win it all last year was Indiana. I thought that they had a year stolen from them by David Stern, and Ron Ron would be extra motivated to get his revenge. Well that didn’t exactly work out.

So, preseason picks. Completely pointless. (Again, that doesn’t mean you shouldn’t be reading what Lang wrote for the magazine that he’s been posting every day. We need to create favorites and underdogs to make the games more interesting.) But here is what we DO know.

In the NBA, teams don’t come out of nowhere to win the championship. Experience matters. In the NFL, it doesn’t always. In baseball it’s a crap shoot, but in the NBA it matters. The Heat had to learn from the previous year when they took Detroit to a seventh game in the Conference Finals with both of Miami’s superstars hobbling around. The Spurs had already been the champs, and they first got there after years of playoff experience, one intentionally tanked season getting them Duncan, and more deep playoff runs. The Lakers kept getting swept, but they learned and had the talent in place, and just needed the coach. The Pistons had been overachieving, going deep in the playoffs winning games by scores of 62-58. They got a new coach, Rasheed was the missing piece, and suddenly they were champs. Everybody needs growing pains to prepare for being champions. Man, that was Walton-esque.

What does this tell us? Teams that should be ready to compete for the championship this year are: Miami, Dallas, Phoenix, San Antonio, Detroit. I personally have no faith in Detroit this year, and one of the most important lessons I leanred last year is that Flip Saunders is a great regular season coach, and that is all. I suspected juast as much when he was in Minnesota, but last year proved it. At least in my eyes it did. Everyone else in this group is a legit championship threat.

Dark horse challengers for the throne, and these are a reach: New Jersey, LA Clippers, Cleveland. They’ve all proven they can win a playoff series, but it’s still too soon for the Cavs, the Clippers have Dunleavy calling the shots and they’ve never been in the position of being a good team coming off a good year before which makes me nervous for them, and the Nets have a good mix of superstars and young talent, but they have a Miami problem. You know what, there’s that other NBA trend of teams taking years to climb the mountain by finally getting past that one team they can’t beat, like Jordan’s Bulls over the Pistons or the Mavs beating the Spurs. Maybe the Nets are ready to take down Miami on their way to the chip.

Here are teams that should make a playoff run maybe, but not for the championship: Washington, Indy, Chicago, Milwaukee, Denver, Lakers, Kings, New Orleans, Houston. Most of them have been to the playoffs recently and the Wizards even got to the second round a few years ago. Indy gets there every year, and now they’ve shaken things up a little, but they always seem to get there off memory. Sacramento could make a run at the title in the West or they could be the biggest disaster in the league. Denver and Chicago have been getting there and bowing out in round one. You have to expect them to finally bust through, or I guess we’ve got more Timberwolfian situations. Houston has the talent and coach despite multiple star players that get hurt way too often, and T-Mac still hasn’t been out of the first round. The Lakers have the best player and coach in the league, and they were a missed Tim Thomas shot away from getting to the second round ahead of schedule. Milwaukee has been there a few times and done absolutely nothing. New Orleans has the best young PG and they are building around him. Winning a playoff series might be too much to ask so soon, but they have to at least get there this year. The problem with this whole list is taht there are way more teams than spots available. Somebody is going to flop and someone else will overachieve by default.

The wild cards are Memphis and Boston. By wild, I mean odds are that Memphis could really suck this year. Boston might make 25 trades or make the playoffs with the youngsters they’ve got in place. I don’t know what to make of the Celtics. While I’m here, RIP Red Auerbach. I went through a phase in my life when I smoked cigars, and I never felt worse physically and my breath never stunk worse. But you pulled it off for decade after decade. Not to mention you were the greatest basketball mind ever. Respect. Moving back to today’s NBA…

Every team I did not mention would be happy to make the playoffs. Of course they all can not. Some are rebuilding (Portland) which is a valid excuse. Some we’re not sure of what they’re doing (Seattle). Others just flat out aren’t any good (take your pick).
That is my extremely conservative look at what we can EXPECT to happen this year. Of course there will be a few plot twists, but that’s the closest I can give you. Remember, two years ago the season was crazy with all kinds of unexpected craziness such as Phoenix and Seattle having amazing years and a Wizards-Bulls playoff series where one team got to go to the second round after being losers for a long time. The Finals that year was the purists dream and TV executive nightmare of Spurs-Pistons. So, expect the unexpected but also expect the expected.

The season begins VERY soon. I am ready.