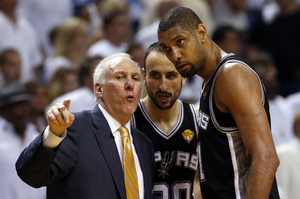 You know the San Antonio Spurs did something remarkable this season, because it takes a lot to impress Gregg Popovich.

The man has seen it all during his Hall of Fame career, winning four championships and earning the reputation as the NBA’s best coach. But even Pop admits that he is amazed by the Spurs’ performance this season.

After suffering a crushing Game 6 loss in last year’s NBA Finals, San Antonio nearly pulled off an upset against the Miami Heat in Game 7.

Having come so painfully close to winning a title, Tim Duncan, Tony Parker, Manu Ginobili and company put their hard hats on again, and ripped off a League-best 62 regular season wins.

“What does impress me about the group is the fact they’ve competed and gotten themselves in this position after a devastating loss in the Finals last year,” Popovich said.

“I thought they were pretty amazing after Game 6 to play as hard as they did in Game 7, when I think a lot of teams would have just given in,” he said. “Beyond that, they came back, put it aside and have done what they’ve done.

“I think that’s pretty impressive. I don’t think a lot of people have picked up on that, but I have. And I’m really impressed with them.”

Gregg Popovich has once again done a masterful job managing his squad – trotting out 29 different starting lineups, 17 different starters, and keeping everyone under 30 minutes per game. But he knows that they’ll only be judged by what happens in the postseason.

Seemingly every year, fans and critics say the Spurs are too old and worn out to keep this up, and San Antonio simply goes out and makes everyone look dumb for daring to doubt them.

Tim Duncan will soon turn 38 years old, but he says the Spurs are healthy and primed for another long Playoff journey:

“It’s been a long season, and we’re ready for the playoffs, definitely.”