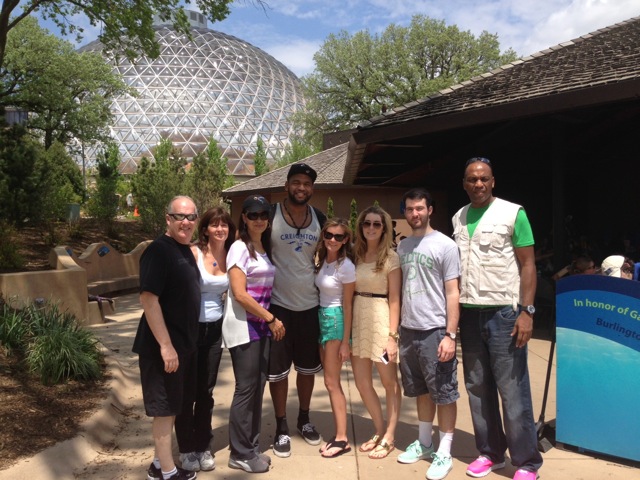 At the beginning of the Academy Award-winning blockbuster The Blind Side, Sandra Bullock’s monologue describes the mold for an ideal left tackle in the NFL.

“The ideal left tackle is big, but a lot of people are big. He is wide in the butt and massive in the thighs. He has long arms, giant hands and feet as quick as a hiccup. This is a rare and expensive combination.”

Like Ravens offensive tackle Michael Oher, this physical description also characterizes Gregory Echenique, a 2013 NBA Draft prospect from Creighton University. In fact, Echenique has a lot in common with the movie’s protagonist. But one thing truly separates the two athletes: their respective childhoods.

While Oher grew up in the projects of Memphis as one of 12 children born to his alcoholic and crack-addicted mother, Denise, Echenique spent his younger years as an only child in Guatire, Venezuela. Oher’s father, Michael, was imprisoned more than he was at home, whereas Echenique’s old man, Jose, is a retired Venezuelan basketball legend and a loving father who enjoys spending every day with his wife, Maria. Jose played for the Venezuelan national team in the 1990 FIBA World Championship team.

But during their respective high school years, their stories begin to cross. Oher was basically on his own, bouncing around from foster family to foster family. You’ve seen the movie—you know he ultimately landed within the loving arms of the Tuohy family and goes on to star at Ole Miss and be selected in the first round of the 2009 NFL Draft.

Echenique wasn’t as highly touted a prospect in high school, only ranking as the 20th center in the Class of 2008 by ESPN. But he too benefited from the love and care of a generous and compassionate family. Echenique and his parents decided it would be best for the 14-year-old baller, who could barely speak a lick of English, to accept recruitment from Dan Hurley at St. Benedict’s Prep in Newark, NJ, and move to America on his own. The family, with a basketball background, decided it was the best move for him both academically and athletically, but the decision certainly came with several challenges.

“My family and I decided that there was also better opportunities, better education, and the fact that I could learn a different language, that all just put me in a better spot for the future,” Echenique remembers. “It was also a really good school. But it was kind of in a rough area. If you went a couple streets over, you were in the heart of Newark, it was a little scary.”

In a city with an approximate population of 227,500, Newark has about 13,000 crimes reported annually. Echenique wasn’t too daunted by his school’s surroundings, enjoying the pleasant quaint campus that the school, athletic facilities and boarding school dorms created.Yet Echenique often felt lonely within the institution’s boarding school program.

“When I started at Benedict’s, the house rules were that you had to stay there from Monday through Friday. Then on the weekends, they let kids go home on Friday, but you’d have to be back by Sunday at like 6 p.m. In the beginning of my freshman year, I had nowhere to go.”

Enter Scott Smith, his wife Eileen, and their three children.

“I remember Coach Hurley actually took me to his home once, but at the time he had two little kids,” Echenique said. “But Scott Smith had kids my age. So they thought it would be good for me to develop my English and get accustomed to living [in the US].”

Back in Echenique’s freshman winter in 2004, Smith, now an assistant coach at Wagner College in Staten Island, was an assistant on Hurley’s staff at St. Benedict’s.

“Coach Hurley always wanted our international players to get a taste of what family life was like in America and he wanted assistant coaches to be more than assistant coaches and really have a relationship with the kids,” Smith says. “Gregory’s freshman year, we were in a tournament down in Florida and we played right before Christmas time. When we came home, a couple of kids were staying at the dorm, but he would have been the only basketball player staying there. So I felt bad that he was going to be spending Christmas alone. At that point I called my family and asked if it would be OK to have him come home, and they said, ‘Absolutely.’”

It didn’t take long for Echenique to become a regular in Smith’s household. Once the large Venezuelan was comfortable in Smith’s home, he became an intricate part of the family.

The situation was perfect. Smith’s oldest, Kayleigh, was 16; his other daughter, Morgan, was 14; and his son, Kieran, was 11.

“They loved taking him out and going to movies and explaining English to him,” Smith says. “When he would come over, he could just relax and asked a lot of questions to my kids. They were taking Spanish classes so they understood a little Spanish and they pointed things out in English for him, so that helped him with his transition.”

With the language barrier slowly crumbling, the Smith family and Echenique family merged into one. Smith would speak with the

Echenique’s parents several times a month over the phone and when they first came to visit him in the States, the two families immediately hit it off. Echenique says that the Smiths made his transition to America seem routine.

But just like in Oher’s story, it was time for the largest member of the family to depart for the world of college athletics. Echenique received offers from Villanova, Georgetown, Rutgers, Seton Hall, UAB and even received interest from Florida and took an unofficial visit to Duke. But the New Jersey state school stood out among all.

“Rutgers was the first school that offered me,” Echenique said. “The main thing was that they recruited me first and they were bringing in a lot of guys that I thought we could really do something. We thought we could make something happen.”

The proximity to his family also played a major role in Echenique’s decision: “It was 45 minutes away by car so if anything happened we would be there to help him,” Smith said.

Unfortunately, something did happen. Just seven games into his sophomore season in ’09-10, Echenique was poked in the left eye by a teammate in practice, damaging his retina. The Rutgers coaching staff, then led by Fred Hill, convinced Echenique to continue practicing for three weeks following the injury. Eventually, his retina was completely detached and when he finally was checked by doctors, he underwent surgery as soon as possible.

Hill did not return to Rutgers the next year and neither did Echinique. In fact, the big man transferred to Creighton before the spring semester in 2010 even began. He wanted his team to be like a family—like his family in Guatire and with Smiths in New Jersey.

By transferring before the spring of 2010, Echenique retained a semester of eligibility at Creighton, as well.

“It was definitely a positive experience,” Echenique says of his days as a Blue Jay. “It was a chance to start fresh. The way that the people embraced me, the fans and everything, sometimes I feel like I went to Creighton for my four years. At Rutgers, I grew up as a player, but at Creighton I think I became the player I am today. I think that’s only set up what I’m going through now.”

Before he could have impact on the court in Omaha, he needed to get back into shape. While being sidelined with his eye injury, Echenique ballooned to north of 300 pounds.

“We had some weekly goals and our nutritionist met with Gregory about some changes in his diet,” Creighton head coach Greg McDermott said. “Our strength coach worked on a daily basis with Gregory to transform his body. But, at the end of the day, we were trying to get Gregory to lose two or three pounds a week and it takes discipline on his part and he was able to do the things he was supposed to do and stay away from the foods he enjoyed eating.”

With his tedious work, Echenique conditioned himself to average 10.0 points and 6.6 rebounds and 1.7 blocks in just 23.2 minutes per game over his two and a half seasons at Creighton. And, eventually getting down to 8 percent body fat, he, alongside McDermott’s phenom son, Doug, helped lead Creighton to the third round of the NCAA Tournament in both 2012 and 2013. McDermott praises Echinique’s defense as a consequential part of the Blue Jay’s success.

“He’s the best interior defender that I’ve ever coached,” McDermott says. “At no time did we ever double-team a post player because Gregory is just so effective at taking out an opposing player from his game. I think he’s better defensively than any other player in the Draft on the front line. There might be better shot blockers, but in terms of just every possession doing what you’re supposed to do in positioning and making the right read, I don’t think there’s anybody as good as Gregory.”

By the time Draft day arrives, Echenique will have worked out for 12 individual teams—a feat that was considered an impossible accomplishment just weeks ago. The experience has been exciting for Echenique, even if he’s not guaranteed to be drafted. For him, just being in this potential-filled situation is considered a blessing.

He is certainly not the prodigy that Oher was. But through hard work and the love of an extensive family, Gregory Echenique may have put himself in the position to have a similar Hollywood dream come true.