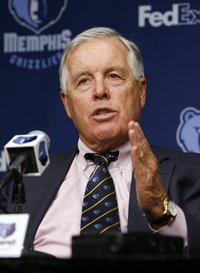 In many ways, the Draft Lottery is a wonderful torture technique. I’m actually kind of surprised that Bush and co. have yet to adopt it.

Not only are the worst NBA teams trotted out in front of the world and reminded yet again of their ineptitude, with subtle insults like, “Elgin Baylor is a veteran of the lottery process”; since there can only be one winner among this group of losers, the majority of them leave the event with the crushing realization that pure luck will not save them; they must indeed figure out a way to dig themselves out their miserable situation.

Case in point: The Memphis Grizzlies, recipients of the fifth pick last night.

“It’s a typical situation,” Griz owner Michael Heisley said when reached by telephone. “We’ve been in the lottery so much and have never gotten the No. 1 pick. It doesn’t make any sense. Last year, I said it was a screwed-up system. This year, I think it’s a screwed-up system.

But I still think we’ll get a good player. This is a deep draft.”

“Listen here, bub. We didn’t give away our franchise player for nothing, and end up losing this many games just to settle for the damn fifth pick!”, Heisley did not necessarily add.