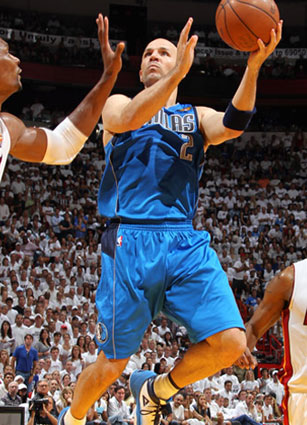 It’s a little before midnight on Thursday, June 9, and the rabid enthusiasm of 20,000-plus fans is spilling through Dallas’ American Airlines Center’s walls like sweat through skin on a hot summer day. Just a few minutes earlier, against most odds, the Mavericks won the Finals’ fifth game, 112-103, outscoring the Miami Heat 17-4 in the final 4:23 of the fourth quarter. Chants of “Let’s Go Mavs” and “Beat the Heat” are echoing up and down the arena’s hallways—even the ones hundreds of feet away from where any paying customer not named Jimmy Goldstein is allowed to walk—and the energy is radiating from the increasingly empty court out to the increasingly cramped parking lot.

The mood in the post-game interview room is also lively, but confusion fills the air. What the hell just happened? After an off night in Game 4, superstar LeBron James was supposed to go off tonight, and though he played OK—Bron finished with a triple-double (17-10-10)—the Mavs were just better. Sure, some crazy, ill-advised toss-ups happened to drop in, but for the most part, the guys in the white jerseys simply played quality basketball, especially down the stretch, when open looks became wetted jumpers, the opposition’s poor passes became turnovers (which became lay-ups or foul shots), and the smoothness of the group’s ball movement resembled what generally takes place during a standard practice, when the defense is literally non-existent. But still, the curious media wants to know who—beside the obvious scorers—deserves the credit for all of this, and unofficial team spokesman Jason Terry is happy to oblige.

“It’s all about our leader Jason Kidd,” Jet says. “The way he plays the game, the way he always played the game, rubs off.”

A few minutes later, Mavs forward Brian Cardinal wholeheartedly cosigns Terry’s words. “Just seeing how hard [Kidd] works, and how smart he is, with being the floor general, I think that motivates everyone in the locker room to give it their all. And we all understand he’s not getting younger—along with all of us. We’re gonna go out there and play as hard as we can.”

While his teammates pinpoint the 38-year-old Kidd as the reason for their success, he deflects the praise right back to them. “When you can play at a high level, and you are surrounded by guys who play at a high level, you don’t want to be the odd one out,” says Kidd. “So you want to bring your game up no matter what age you are, and you want to contribute and help your team win. And that’s what I’m trying to do.”

It takes a lot to be that dude—the player who can make everyone around him step their respective games up using only his presence. But this 6-4 point man has earned that spot. The voyage he took to the 2011 NBA Finals was far from short, but more notable than its length was the evolution that took place along the way.

To run through the coast-to-coast journey as succinctly as possible: Born in San Francisco, Kidd transitioned from soccer to basketball early in grade school, developing into a man on the courts of Oakland and establishing himself as a national hoops sensation before he graduated from St. Joseph Notre Dame High School. He attended the University of California, where he thrived, earning himself Freshman of the Year honors and a feature in SLAM’s first issue—which came out in 1994. He was drafted that same year by Dallas, where he wound up once again after bouncing around the NBA—from the Mavs to Phoenix to New Jersey and back to Dallas—for a decade and a half. The closest he came to a chip during that period was in ’03, when the San Antonio Spurs beat his Nets in six. (Twelve months earlier, the L.A. Lakers bounced them in four.)

For the past three and a half seasons, Deuce, as Terry calls him, has been manning the point in North Texas, where it all started almost two decades ago, and while he may have lost a step on defense, he’s gained one on offense: a reliable three-point shot that swishes in with regularity. Early in his career, he was the engine of many a high-powered offense, becoming the poster child for fast-break alley-oop lobs and passes that weaved through defenses using angles only his eyes could see—somehow landing in the hands of an astonishingly wide-open teammate. “He has tremendous vision, and he sees everything,” says Cardinal. “You might not think you’re open, but you better be ready to catch it, because that ball can zing in there at an important time.”

Of course, there was always the all-around game, with triple-doubles that were racked up on a weekly basis like pool balls. And he’s been nothing but solid on defense, too, acquiring four NBA First-Team All-Defensive and five Second-Team All-Defensive awards in total. But to be real, as an up-and-comer, this guy could not shoot the rock. He made 100 three-point field goals just once during his first seven seasons (and he fired up plenty more), and wasn’t much better from mid-range, earning himself the nickname “Ason” for obvious reasons. Hell, the current Editor-in-Chief of this magazine once wrote that Kidd was equipped with a jumper “that would cause most junior high coaches to cringe.”

And now, consider this: At the moment, he’s third all-time with 1,795 three-point field goals made, behind only Ray Allen (2,612) and Reggie Miller (2,560). We could list the notable names he’s ahead of, but it feels easier to say that with the exception of the two sharpshooters in the previous sentence, it’s everybody else.

“I think as all players get older and grow, I think everybody’s game somewhat evolves and changes, and I think that was just kind of a natural progression,” Cardinal says.

Perhaps. But while natural progression helps raw skills progress into advanced talent, there’s nothing natural about the hours and hours Kidd spent in the gym earning back the first letter of his first name over the past decade or so. That was artificial. Had to be.

“When you look at Jet, you look at Dirk [Nowitzki], these guys can shoot the ball with the best of them,” Kidd explains. “So that was my challenge, that I wanted to compete and to help my team, I had to be able to knock down the three to make it easier for these guys. So I worked on it every day. And no matter what age, as long as you feel you can do something to help your team win, it’s a positive thing.” So work on it he did, and the proof is in the—yeah, you know.