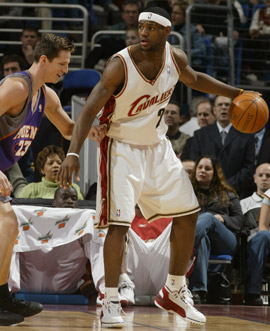 This is the story of the first time I met Michael Jordan and LeBron James. I didn’t meet them both on the same day, but the stories of my first encounters with these two basketball idols are eerily similar.

Just like every kid who ever picked up a basketball in the 1980s, I was obsessed with Michael Jordan. According to me, he was already the greatest player of all time and he hadn’t even won his first championship with the Bulls yet. I would practice for hours in my backyard in suburban Los Angeles pretending I was MJ. Who didn’t? I dreamed of the day I would meet him. Maybe I could get his autograph. Maybe I’d even get to talk to him. Not in my wildest dreams would I have imagined that the first time I would ever meet Michael Jordan was the same day I got to play basketball against him.

It was during the summer of 2000… After completing my freshman year at Stanford University, I was invited to be a coach/counselor at the Michael Jordan Flight School in Santa Barbara. Of course, I accepted. I could have been invited to the Michael Jordan School of Balloon Animals and I would have gone! This annual week-long basketball camp, held at UC Santa Barbara, is for all kids ages 8-18. The counselors for the camp are mostly comprised of the best college (and the occasional high school) basketball players in the country. It is an honor to be invited, and it’s also a great basketball opportunity. Each night when all the campers go back to the dorms on campus for bed, all of the college players stay in the gym for 5-on-5 scrimmages until midnight. Even though MJ was retired from the NBA at this time, the rumors were he still would play every night with us and he’d be playing to win, as always. I was giddy about the prospect of being on the same basketball court as the G.O.A.T. I still had never met him, even though I’d be coaching at his camp throughout the day and listening to him talk to the kids. I figured I would get my chance at the late-night scrimmage.

The first night the teams were divided up, I found myself teamed up with Jason Williams (Duke), Richard Jefferson (Arizona), Michael McDonald (my teammate at Stanford), and Dermarr Johnson (Cincinnati). I thought it was a great group, until I looked across the court at what Jordan had assembled. It was his camp and he was Michael Jordan, so he hand-selected Quentin Richardson and Darius Miles (both had been selected in the NBA Draft by the Clippers a few weeks earlier), as well as Carlos Boozer (Duke). It was going to be a tough, competitive game. I had never been this fired up for a scrimmage in my whole life! I thought to myself, “This would be a story that I could tell my children about someday!”

The game was close throughout and guys were playing with mid-season intensity. Richard Jefferson volunteered to be the man to defend MJ and even though Jordan was scoring, he was doing a decent job of making him work hard. On one possession toward the end of the game, Jefferson drove hard to the basket and fell down trying to pass to a teammate, turning the ball over. As we sprinted back on defense, I realized that MJ was running right next to me and that his defensive man (Jefferson) was trailing behind the play. I called out that I would switch and take Jordan for that possession.

Even though it was for only one play, I was guarding Michael Jordan. My next thought to myself was, “Don’t embarrass yourself in front of your idol!” MJ didn’t have the ball at the time, but I knew that it was only a matter of time before he would. He cut to the top of the key at the three-point line and received a pass from Darius Miles. This was it! My moment. It was me versus him, one-on-one. Jordan squared me up to the basket, palming the ball in one hand like he always did (he has HUGE hands). He then stopped for a second and looked at me, saying:

“You know… No white boy has ever been able to stop me before.”

I couldn’t believe it. MJ was talking trash to me! I fought off a smile and before I could muster another thought, he had taken a dribble to his left and pulled up for a jump shot. I did all I could to stay in front of him and put a hand in his face. Luckily, he missed the shot. I ran down the court asking myself if that encounter really happened. It did, and it was awesome.

Fast forward to the ’03-04 NBA regular season. I was in my second year with the Phoenix Suns. We were a young team, led by new coach Mike D’Antoni. We didn’t have Steve Nash yet (he would join us next season), but we had a lot of young talent, including Amar’e Stoudemire, Shawn Marion and Joe Johnson. We traded away Stephon Marbury about halfway through the season, and we were trying to rebuild our team identity. It was a long year and we struggled at times in the loaded Western Conference, but it was a really fun season. At least I thought it was.

During that year, the biggest story in the NBA was about the newest high school sensation, LeBron James. He lived up to the hype and was already starting to dominate at the NBA level. I was looking forward to the chance to play against him that year. It came in Cleveland, toward the later stages of the season. I was the 6th man of our team (averaging over 20 minutes per game), so I knew that there was going to be a good chance that I would see a lot of LeBron on the court that night. I also know that, even though LBJ is not my defensive assignment, at some point (just like in the scrimmage in Santa Barbara) I will have an opportunity to guard LeBron.

My opportunity came in the second quarter. After a screen and roll with my guy, I switched men with Joe Johnson, leaving me to guard LeBron on the wing right in front of the Cavalier bench. It wasn’t the same feeling as when I got to guard MJ (LeBron was still a rookie at this point), but it was still pretty cool. Everyone who saw this young man play knew that if he stayed healthy, he coul

d be one of the best to ever play. I was well aware of his physical skills and the fact that he outweighed me by at least 25 pounds. So I backed off LeBron a couple feet. He immediately turned his back to me and started to back me down into the post area. I knew this was coming, but I also knew that my teammates would help if I got into real trouble. After the first two dribbles, I heard a voice from their bench saying:

“Take that white boy to the hole!”

I smiled when I heard that (see picture). It was funny. It also reminded me of the day I played against MJ. LeBron didn’t score on that possession either. He passed ball, like he always does when he sees help coming toward him. It’s what makes him so good. I wouldn’t have been able to stop LeBron in the post that day, or any other day, but it was fun to try.

Michael Jordan and LeBron James. Two of the best basketball players ever. These two have a lot of similarities: scoring titles, All-Star games, endorsement deals with Nike, etc. What else do they have in common?

Getting checked by a “white boy” from Glendora, CA. Well, at least that is the story I will tell my kids someday.