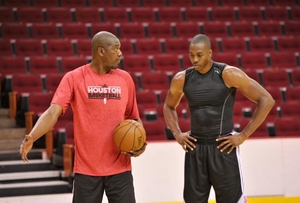 The Dream has been keeping close tabs on the Houston Rockets’ superstar center, and thinks Howard is reverting back to some of his poor, old habits.

“The truth is that I can’t wait to get back to Houston to do more work with Dwight,” said Olajuwon, who left Houston in early October to return to his home in Amman, Jordan and has been keeping track of his pupil on TV. “I wish he was doing a better job. Dwight has always been athletic and aggressive and he still is. But when I watch him, what I see are opportunities that he is missing. When he gets the ball, he seems to be taking his time to decide what move to make, where he should go.”

“There should not be a delay for Dwight. He must be able to make a faster recognition of the situations and react immediately with a go-to move. You must move right away before the defense has a chance to set up. You must be the one making the first move so that you can force the defender to always be the one reacting. I thought we were doing a good job with this when we were working together over the summer and at the start of training camp. But what I see now is that when Dwight gets in competition, he has a tendency to go back to all of his old habits. He’s just doing all of the things that he did before. He needs a reminder.”

The Dwight Howard we see today pales in comparison to the utterly destructive force that won the Defensive Player of the Year award from 2009-2011, and was a much better offensive option that most critics are willing to admit. His former coach Stan Van Gundy isn’t so sure that he’ll ever regain his old form. Per Grantland:

“He’s gotten a little older, and the back injury is there,” Van Gundy says. “That will take away some of his quickness and mobility.”

One has to wonder if Hakeem Olajuwon isn’t wishing for a player that simply doesn’t exist anymore.