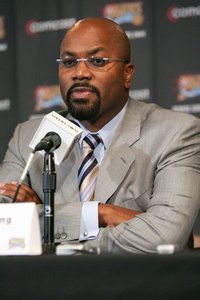 For the first time in a long time, Sixers fans woke up smiling this morning: GM Billy King is expected to get canned by the team today. In a rare move, his job will be taken by a guy from a division rival. From the Philly Inquirer:

The 76ers are expected to fire Billy King as team president today and replace him with New Jersey Nets general manager Ed Stefanski, two league sources said last night. The team would give Stefanski a multiyear contract to become the franchise’s chief decision-maker on basketball matters, a source said.

According to the paper, head coach Maurice Cheek’s job is safe. For the time being, anyhow.

The Sixers, still reeling from the Allen Iverson trade, are currently sitting at 5-12. Since joining the organization in 1997, Billy King helped the team reach the NBA Finals (in 2001) for the first time in nearly two decades. The last few years, however, have proven that he was no longer the right man for the job.

Unlike Biggie’s leprechaun, King reigned at the top of the Sixers’ franchise for far too long.