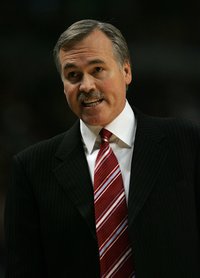 According to the Chicago papers, Mike D’Antoni would like to take over the coaching reigns in Chicago. Whether he’s granted his wish is another matter altogether.

Mike D’Antoni has told John Paxson he wants to be the Bulls’ next coach, according to sources.

Whether Paxson has the same wish remains to be seen after the Bulls’ general manager spent parts of Sunday and Monday with the Suns’ coach in Phoenix.

Though D’Antoni has enjoyed great success in Phoenix, there’s no telling how his high-octane system would work with a team like the Bulls. My guess is not very well.

Chicago – who also interviewed Nuggets assistant Mike Dunlap – must decide if Mike’s hefty price tag (he’s probably going to be looking at a raise from his annual salary of a little over $4 mil) is worth the trouble.