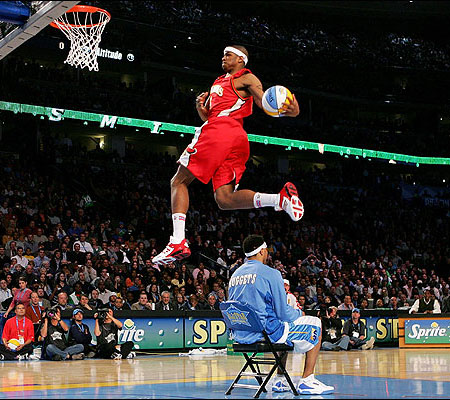 Can you believe that the regular season is only six days away? That’s right, only six days away from the League’s 61st year. Before that jumps off, some of the best hoop writers from around the web would like to say a thing or two about their respective teams, and we’re more than happy to give them the floor.

Today, Sekou Smith, beat writer for The Atlanta Journal-Constitution, helps us preview the team he covers, the Atlanta Hawks.

SLAM: What can we expect from Joe Johnson and Josh Smith (two of the best young talents in the League) this season?

SS: You can expect stellar numbers from Joe Johnson this season, an All-Star caliber season if he was on a team that was a playoff contender. He’s that good and I think his game is that polished. He was that good last year. But as everyone knows, winning changes everything.

I expect Josh Smith to fill up the stat sheet like Andrei Kirilenko for the Hawks. He’ll deliver a little bit of everything. And he’ll remain among the league leaders in blocks for a second straight season. I think the most surprising thing about his game this season will be his proficiency from beyond the 3-point line.

Any news on Speedy Claxton’s injury? Is he the ideal point guard for this team?

Speedy’s cast is off and he’s been through light workouts in the past few days. His fit on this team remains a mystery because of the time he’s missed in training camp. But everyone involved is convinced that he’s the perfect fit at the point for the Hawks. I’ll go to my grave believing that Marcus Williams was the ideal fit for the Hawks. But if they’re going to get a veteran point guard who’s tough as a nickel steak and can play at a speed that few players can match, Speedy’s the right guy. I just don’t know yet if he’ll be the kind of vocal, take-charge presence the Hawks will need on the floor.

I’m always amazed by the amount of empty seats at Hawks games. What’s the atmosphere like in Philips Arena?

The atmosphere is actually better than you think most nights. When they do pack the crowds in (and it happens, depending on who the Hawks are playing that night and if you allow time for the notoriously late crowd to get into the building) it can get pretty rowdy. But if the Hawks want to fill seats they have to win consistently.

The Hawks nabbed Shelden Williams in the draft. From everything you’ve seen so far, what will contribute to the team?

I think he’ll be the workman presence he was advertised to be leading up to the draft. Anyone looking for an All-Star caliber power forward will need to keep doing so. Shelden’s not that type of explosive athlete. But he is a nuts and bolts guy, the kind of guy that helps teams win games as opposed to the kind that keeps them from winning games. He’s well schooled on how to play the game and will be an asset rather than a liability.

Alright, enough foreplay, how will the Hawks fare this season?

I’ve been saying this for weeks now and I haven’t seen any reason to change it. I think the Hawks are a 35-40-win team this season. I don’t think that’s good enough to earn a playoff berth in the Eastern Conference, which I think will be improved this year. But I think it’s another quality step for a franchise still taking baby ones at this stage of the game.