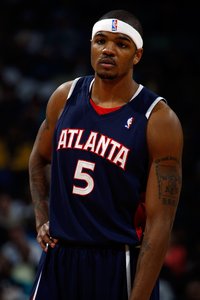 The Atlanta Hawks tasted wholly surprising success in last year’s Playoffs, pushing the eventual champion Celtics to the brink of elimination in the first round. They fully intend to make a return to the postseason in 2009, and would like for it not to be a surprise this time.

As such, training camp is going to be a killer this fall. From the AJC‘s Sekou Smith, who chatted with Hawks GM Rick Sund:

We’re going to really focus in on training camp. I’ve had some discussions with Mike [Woodson]. It’s going to be a serious, serious endeavor this year. We’re putting them up at the hotel this year. They’re going to have practice sessions in the morning and skull sessions and meetings and everything at night.

That’s all fine and swell, Ricky baby, and here’s to hoping HBO cameras pay a visit to your facilities. But you might want to think about conserving some of that boundless energy for a little thing we like to refer to as the “82-game regular season”.