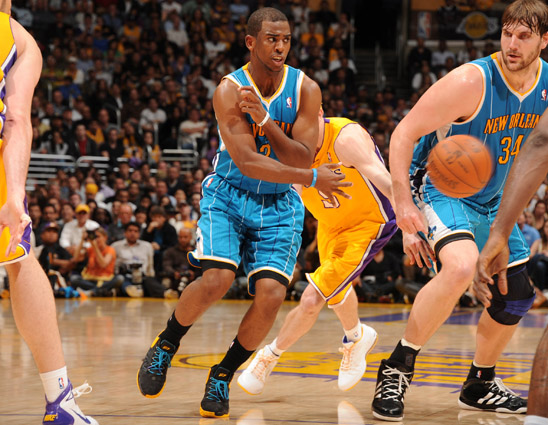 In the spring of 2001, Tim Fuller became an assistant basketball coach at West Forsyth High School in the suburban town of Clemmons, NC. Among the school’s 1,800 or so students was a fiery kid named Chris Paul, a sub-6-foot, 100-something-pound sophomore on the JV team who separated himself from the pack with only his scorching desire to stay in the gym, to keep getting better. Physically, he looked no more or less athletic than the other boys who spent their free time playing ball. Average height, average weight, average strength.

Fuller, then a recent graduate of nearby Wake Forest, decided it’d be wise to grab a few guys from his alma mater and bring them to West Forsyth to give Chris and Co. a chance to go up against some meatier competition. Among those college students was Broderick Hicks, then the Deamon Decons’ starting point guard. CP, playing alongside a couple of the college hoopers while tasked with matching up against Hicks, embraced the challenge, and what the assistant coach saw next helped him realize that this cat was made of something extraordinary.

“He was barking orders to those guys as if they were on his JV team,” Fuller says. “For a 15-year-old to do those types of things to 21-, 22-year-old guys that were very good players in the ACC, it showed me a lot about his mindset. And [his team] won a lot of pickup games.”

Fast-forward four years. Having declared for the ’05 NBA Draft, the Wake Forest sophomore and highly touted prospect was spending his days working out with renowned hoops trainer (and SLAM columnist) Idan Ravin. Ravin had been doing what he calls “building up [Chris’] resistance” by keeping the sessions private and not allowing the young guard the opportunity to face off against any of his peers. But an NBA GM had come to town to scout, which meant quality competition was now a necessity. So Ravin brought in Gilbert Arenas, the outspoken sharpshooter who was then coming off his breakout season after dropping 25.5 ppg and reaching his first All-Star Game months earlier. Once again, Paul embraced the challenge.

“[Chris] won every game 1-on-1,” Ravin says, “and Gilbert looked at me like, This kid is a motherfucker.”

You probably know what CP3 has accomplished to date: a set-in-stone status as both a superstar and perpetual Playoff contender, stints on the All-NBA First, Second and Third Teams, four All-Star bids and a coveted Jordan Brand sponsorship. And it appears to have all come pretty easy. But talk to those who’ve guided him along the way, and stories of overcoming low expectations like the previous two pile up, one after the other after the other. There was the time he went to UNC-Wilmington and destroyed JamesOn Curry, a much-hyped 6-4 guard who at one point had a scholarship to UNC. There was the time he outplayed the higher-ranked Mustafa Shakur at the McDonald’s All-American Game after being told he didn’t stand a chance. There was the time he was warned he wouldn’t receive much playing time at Wake Forest, with established point guard Taron Downey clogging the depth chart. Chris earned the starting role and became the ACC Rookie of the Year.

There was also the time a room full of Wake Forest coaches attempted to convince him to stay in school for another year, to play out his junior season with the Decons before going pro. “You know how good those guys are in the NBA?” one asked. “Guys like Jason Kidd? You can’t guard those guys; those are men.”

Most recently, there was the instance when he dragged the literally limping New Orleans Hornets into the ’11 NBA Playoffs. Starting power forward and former All-Star David West was out for the season after tearing his ACL, a development that downgraded a kind of overmatched squad into a very overmatched one. But led by CP3, the Bees came out swinging against the mighty Lakers, winning Game 1 behind Paul’s 33 points, 14 assists and 4 steals. He successfully navigated his way through L.A.’s defense, shooting efficiently from all over the floor, making the right passes, sneaking through the paint en route to floaters or quick dishes. It was simply an otherworldly underdog performance beneath the bright lights of the then-top dog’s arena.

The Hornets failed to make it out of the round, eventually succumbing to the Lakers’ stacked roster and intense interior presence, but the heart Chris displayed didn’t go unnoticed—or at least shouldn’t have. New Orleans won Game 4 before eventually falling in six, with CP3 averaging 22 points and 11.5 dimes through the series despite his team’s undermanned roster. What we saw was a scrappy contender picking and clawing at the opposition, doing all he could until there was no way to possibly hang on any longer.

“There is an internal fire in him,” Fuller says. “Since I’ve been coaching, I’ve never come across a competitor like him. He wants to compete against the absolute best, to be the best. He will not rest until he is.”

That flame was probably lit during high school, while Chris was learning to cope with the fact that, short-ish and semi-squat, he’d rarely come across the opportunity to utilize a physical advantage to get the better of his opposition. Without the ability to body up defenders—most defenders, at least—or breeze around them with blinding quickness, he added an extra element to his repertoire, one that can’t be found in a weight room.

“We’re not talking Earl Boykins here,” Ravin says. “There’s a physical disadvantage, but there’s plenty of people who are undersized. I think what it is, he’s very discerning. He’s very disciplined. Not just in what he does, but with what information he intakes. He sifts through things. He’s thoughtful. There’s something to be said about that. He pulls through everything. There’s a lot of discretion and discipline in his thoughts, which makes him very unique.”

Using this strict, self-enforced process of thought, he’s picked up the ability to see the action unfold before it actually does. It’s tough to confirm, but everyone who’s coached Paul in some capacity truly believes he understands the sport a little differently than everybody else he’s on the court with.

“He sees things that people watching the game don’t see, and I think that carries over to his game,” corroborates Jeff Battle, an assistant coach at Wake Forest who mentored CP3 during his time there. “He’s always a play ahead; he always knows what guys are supposed to do. He does what the game wants him to do. It sounds simple, but it’s [not]. ‘If you do this on the ball screen, he does that.’ That’s hard, to be a point guard and really understand that concept.”

While training Chris on a day-to-day basis, Ravin is a first-hand witness to the methodology behind the madness. “He engages the workout in a cerebral way and an intellectual way,” he says. “With everything, it’s always contextual, like, ‘How would this situation resonate in my situation?’ ‘How would this work against players that would defend me?’ It’s always an application that he considers when he works out.”

As anyone who’s ever fought for something against the odds can attest, there’s a specific competitive spark needed to keep pushing forward, to keep fighting. It’s that motivation that spawned the “internal flame” Fuller describes, and it’s the reason that flame—pardon the corny metaphor—continues to burn.

“When you look at Chris, what you don’t realize is how incredibly competitive he is,” Ravin says. “He’ll go after your heart, and he won’t stop. He’s relentless.”

“He used to have a ping-pong table down in the basement of his old house,” Fuller explains, “and we used to play ping-pong. He would absolutely annihilate anyone that came into that house. He would be breaking a sweat playing ping-pong because he didn’t want to be beat. When he was a sophomore, he’d come to my house and we’d play air hockey. I still have bruises on my fingers from how hard he was hitting the puck. Playing air hockey! He does not want to lose at anything, and that carries over to all areas of his life. Some of that, it becomes contagious.”

Perhaps that energy is one of the reasons CP wound up on the Player’s Association Executive Committee, and as a result was one of the main player reps during the ongoing lockout. The former West Forsyth High School senior class president does carry himself like a leader, after all. He maintains less responsibility than NBPA President Derek Fisher, but no other All-Star was involved in the exhausting labor negotiations as he was.

It’s a commitment he’s made despite all else that sits on his plate. Paul had himself quite the offseason: he hosted a charity game in Winston-Salem, NC, featuring LeBron James, Dwyane Wade, Kevin Durant, Carmelo Anthony and others; he appeared on Family Feud alongside his loved ones; he tied the knot with his college sweetheart; and he unveiled his newest signature sneaker, the CP3.V, which will hit stores this winter. He wasn’t able to complete an interview for this piece, but given all of the above, we understand.

And it’s clear things are just getting started for Chris. If his contract isn’t extended (by the Hornets or a trade partner) before the season tips off, the summer of 2012 is shaping up to be a wild one for this 26-year-old. That’s when said contract expires, of course, pitting his future as the next “Where will he go?” commotion post-LeBron and Melo. It may cost him a pretty penny or two to navigate the free-agent market—as opposed to staying in Louisiana, where the Hornets retain his Bird Rights and may line his pockets like no one else is permitted to—but regardless, he’ll be a wanted commodity somewhere, if not everywhere, and moving will have its indisputable advantages. And it’s equally safe to presume that wherever CP3 winds up, whether it’s back in New Orleans or elsewhere, the journey’s next chapter will present a challenge that’s sure to be embraced wholeheartedly, no matter the expectations.