Heat Check 2020-21: Players Who Have Thrived Out of the Gates 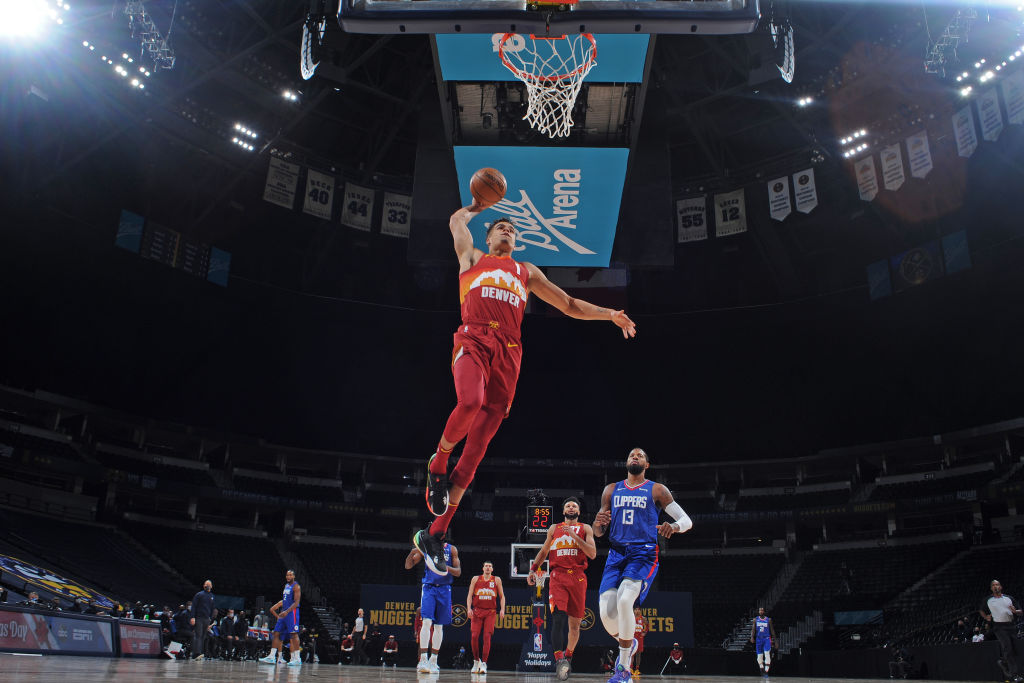 The 2020-21 season is less than two weeks old but nothing beats the first handful of games as indicators of what fans can expect from their squads in a new season.

We’ve broken down the early returns from all players through the end of Wednesday night’s action, highlighting players who have exceeded their 2019-20 production, and broken them off into 30 team-specific tables. You can access any of the league’s squads in the grid below.

Beyond this team-by-team grid is a break down of the process we used to highlight the season’s early surprises and a quick look at some of the players, league-wide, who’ve taken the biggest strides so far in 2020-21.

Darius Garland (CLE) – The hits keep coming for the second-year guard out of Vanderbilt. After a relatively quiet rookie campaign – his first full season back after a significant injury that prematurely ended his college career – Garland has thrived in Year 2. Garland averaged 12 and 4 in 2019-20 and has pushed those numbers up to 19 and 7 so far this season.

Christian Wood (HOU) – If you’re surprised that Wood has put on a clinic in his first three games with the Houston Rockets, you weren’t paying much attention at the end of the 2019-20 campaign. Wood, with averages of 27 and 8 and an equally dominant preseason showing, has long been the king of producing when given an opportunity. He got that opportunity for a few months in Detroit but has never been as permanent of a situation as he’s in now on a three-year, $40 million contract.

Michael Porter Jr. (DEN) – Porter Jr. showed flashes of what he was capable of during his first year with the Nuggets and then took his game to a new level in the bubble. For that reason, it’s not exactly groundbreaking that the 22-year-old has already shown he’s capable of 20 and 7 production in Year 2. The key thing to watch as MPJ develops in front of our eyes on a legitimate title contender, is how meshes with and without ball dominant guard Jamal Murray.

Jerami Grant (DET) – The Denver Nuggets were ready to spend big in order to retain versatile wing Jerami Grant this offseason but opted not to when it became clear that they couldn’t offer him a similar role in 2020-21. That role, apparently, is as a elite-level scorer. Grant, whose high water mark for points per game was 13.6 before this season, has averaged nearly 23 points per game through four early contests – and that includes a nine point showing dragging down the overall.

Victor Oladipo (IND) – Surely you didn’t write Oladipo off after two injury plagued seasons beyond his control, right? That must have been somebody else. Oladipo has looked strong in 2020-21 with a familiar 21, 5 and 5 stat line, and is ready to silence the naysayers that forgot just how much of an impact player he can be at full health.

CJ McCollum (POR) – We may never fully see what McCollum is capable of at full throttle given the impressive chemistry he’s formed with backcourt mate Damian Lillard over the course of the past half decade but he’s done a fine job of pushing the ceiling so far in 2020-21. The 29-year-old may not hit 28 and 6 over the course of a full season but don’t think for a second that he isn’t capable of doing it if he needed to.

Julius Randle (NYK) – No stranger to oddly dominant stat lines, Randle has taken his game to new heights in New York. The big man has thrived as a distributor with the Knicks this season and is sporting a 25, 11 and 8 stat line heading into the new year.

Josh Jackson (DET) – After a humbling year in Memphis, Jackson has returned to his home state of Michigan. The 23-year-old fell into a great opportunity with the Pistons and has made the most of it with a 17 and 6 stat line out of the gates.

Darius Bazley (OKC) – The not-so-secret sleeper has lived up to the hype through the first few games of the regular season and the Thunder clearly have a valuable young building block in 20-year-old Bazley. The former New Balance intern has put up 10 and 9 so far this season and we can’t wait to see what else he’s got in store.

Jaylen Brown (BOS) – Brown’s slow burning development has been key to the consistent threat that the the Celtics have posed on the Eastern Conference and early returns suggest that he isn’t finished yet. If Brown can keep putting up 28 points per game over the course of the season, what does that mean for Boston’s title hopes?

Dejounte Murray (SAS) – Murray is another player that you ought to have known was in store for a bigger year. Still, it’s always nice to see those glimpses of potential translate into more consistent success. The rebounding guard has averaged 19, 8 and 7 in his fourth season and will be a major part of the Spurs heading forward.

Luguentz Dort (OKC) – Um, if Dort can fill the stat sheet on offense, what on earth does that mean for this young, asset-loaded Thunder squad? The 21-year-old bruiser known largely for his presence on the defensive end has averaged 19 and 4 so far this season. If he keeps it up, OKC looks considerably scarier in the short and long term.

Understanding that there’s no consensus way of quantifying the contributions that hoopers bring to the table on a nightly basis, let alone the intangible impacts they have on winning, we’ve measured each NBA player’s 2020-21 production against their 2019-20 numbers.

The results reveal early trends that could end up being significant parts of each team’s narrative throughout the season. Some players have thrived because of work they put in over the summer, some are filling up the box score simply because they’ve landed in a better situation.

In other scenarios, we may just be seeing statistical aberrations that won’t hold up over the course of a larger sample size, hit us on Twitter if you see anything that stands out.

Regardless, seeing which players have shown signs of taking a leap forward in 2020-21, is something that die hard fans, fantasy basketball players and casual viewers alike can get value out of.

In the team tables you’ll see players listed in order of how much more productive they’ve been, with corresponding emojis indicating whether they’ve exceeded or fallen short of their 2019-20 numbers.

You’ll also see each player’s points per game, rebounds per game and assists per game for good measure. Keep in mind that the overall calculation used for player impacts includes more than just those basic stats and does incorporate things like shooting percentages and basic defensive stats.

You can further click each player URL for a more conventional break down of the player’s early 2020-21 stat line and their game log.